The Prisoner in the Asylum: Introduction 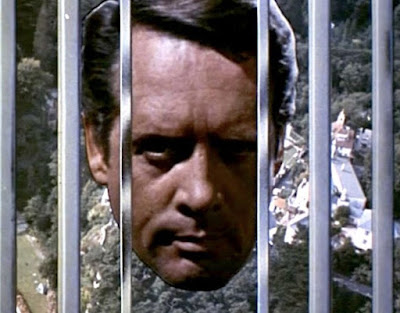 I see it is five years since I went through The Prisoner on the blog so it is high time I had another go at him. I have been thinking about the various viewing orders but I'm having some difficulty with deciding how to do it so I'm going to do a series of posts on Number 6 as a psychiatric patient and The Village as a hospital.

In fact, this always strikes me as one of the more blindingly obvious ways of understanding the series beyond the usual understanding of control and freedom, although I'm rather surprised to see little on it online. I would hate to think that you would find actual original research on this blog! For the record I don't think that one single approach to the series, beyond repeating underlying themes, is correct or even possibly intended by McGoohan. However when you look on the show in a psychiatric sense it suddenly begins to look very different.

So I would like you to consider a scenario...

The Prisoner is an inpatient in a psychiatric hospital called The Village. His name is Peter Smith and he has a long history of being very unwell and in fact, dangerous. He has had a long standing paranoid fantasy about a man named Seltzman, whom he has pled guilty to killing, and a long standing fantasy of being a secret agent. The court has followed the provisions of the Mental Health Act (1959) and Smith has been admitted to the clinic called The Village for assessment and therapy. I would suggest provisional diagnoses of either antisocial personality disorder or a paranoid psychosis, or possibly both, poor bloke.

It is very likely that because he has committed a terrible crime he has psychologically defended himself against this by creating a narrative of resigning his job. I would also suggest that Seltzman disappeared, Smith was arrested and confessed his crime, however will not tell the authorities what he has done with the body. This is the information they want from him but they tend to ask him in terms of his own defense story of resigning rather than directly asking what he's done with the body. Truth be told, they are frankly rather frightened of him, he is highly connected in society, and the staff of The Village are finding it difficult to deal with this clever, psychopathic/psychotic, well-connected, criminal. If you want comparisons for Number 6 I would suggest he is actually out of a similar stable to Hannibal Lecter or Randle McMurphy.

The whole series is seen through his own eyes. For example, the opening resignation sequence is actually after he has been arrested, found unfit to plead, and is going to hospital. He is dealing with this by fitting it into his own delusional network as his resignation from his secret agent job.

The Village is a very special psychiatric hospital which takes patients their local services can't manage - and incidentally charges the government through the nose for it. The patients are referred to by numbers because they are usually notorious in some way and this is to protect their identity to some extent.

Some of the features of contemporary psychiatry and contemporary discussion of it which are commented on by the show include:

- The nature of total institutions, how they damage people and how people behave in them. A key name at the time in this would have been the influential sociologist Erving Goffman. The psychiatrist Russell Barton coined a whole new diagnosis of Institutional Neurosis for the long term effects on the individual of living in a total institution.

- Attempts to improve treatment with new therapies and care in the community driven by drug therapies pioneered from the fifties. This pharmaceutical revolution was what changed psychiatry from a completely behavioural and psychological process to the largely medical model which dominated (in partnership with psychology) today. The relevant UK legislation at the time Peter Smith was in The Village was the Mental Health Act of 1959, which in many ways was revolutionary. A further stream of improvement referred to in the show is the therapeutic community movement, which aimed to treat patients as people and stop mental health hospitals being a cross between a general hospital and a prison. Obviously this influence may have been subject to some twisting by The Village authorities!

- More extreme and hence more fringe innovations in psychiatry such as the wilder extremes of the therapeutic community movement, anti-psychiatry and LSD therapy. These were all ideas founded in a nexus between the counter culture and young psychiatrists of the day, in a setting of the increasing awareness of the problems with the institutions. One of the best known names for this in the UK was RD Laing who used LSD therapy in his private practice, although these experiments were also taking place in the NHS. Not a million miles from where I'm writing this, experiments in LSD therapy were taking place at Powick Hospital just outside Worcester. Anecdotally I have heard of whole groups of staff and patients dropping a tab together. I have actually worked with someone who trained at the hospital at that time but claimed to have no awareness or recollection of this. Strange, since the tales are all over the internet and the NHS has had to settle claims of patients plagued by the after effects. The influence of The Village can only be described as far-reaching.

Of course psychiatric services look a lot different fifty years later to how they did in the heady days of the 1960s so I have had to find a real life institution to compare The Village to. Fortuitously Arizona State Hospital's annual reports are uploaded on to Internet Archive and I have used a selection of them to make institutional comparisons to The Village. I have selected it merely because it is there online. Another institutional comparison, which the State of Massachusetts actually had banned because of its depiction of frank abuse is Titicut Follies. The linked interview with filmmaker Frederick Wiseman draws interesting parallels with The Prisoner of depersonalization and a theoretical connection to the idea of total institution by making connections to treatment of detainees in detention centres. Incidentally the patients seen in the background of One Flew Over the Cuckoo's Nest are not extras but actual patients at the Oregon State Hospital, where the film was made on a disused ward.

I will attempt to post for each of the seventeen episodes, however some are obviously richer than others in terms of comparing to a psychiatric institution. I will be using the production order of episodes because in that order they divide nicely into three groups:

Admission and orientation to the institution: Arrival, Free for All, Checkmate, Dance of the Dead, The Chimes of Big Ben.

Personality disorder and institutional or antisocial behaviour: Once Upon a Time, The Schizoid Man, It's Your Funeral, A Change of MInd, A B and C, The General, Hammer into Anvil, Many Happy Returns.

Psychosis and therapy: Do Not Forsake Me Oh My Darling, Living in Harmony, The Girl Who Was Death, Fall Out. (Order edited 25/5/22 because I mixed it up but it now conforms to the production order on the Unmutual website).

I am going to try to concentrate on a particular mental health subject of relevance to each episode but won't lay them out in advance because my provisional list changes every time I watch an episode!

The 'Where am I' Dialogue Insight

Free for All Beginning therapeutically

Dance of the Dead Institutional display and private workings

The Chimes of Big Ben Psychological experimentation, its significance and ethics as current in the sixties

A Change of Mind Psychosurgery and Seclusion

A B and C Abreaction and the Northfield experiments

An aside: The Hurt Mind Physical psychiatric treatments and the battle with the psychological approach

Many Happy Returns Detention under the Mental Health Act 1959

Do Not Forsake Me Oh My Darling A warning about the misuse of psychiatry, a therapeutic allegory, what happened to Seltzman and Smith's delusional network

The Girl Who Was Death Part 1 Various possible interpretations

The Girl Who Was Death Part 2 Symbolism