The Prisoner in the Asylum: Dance of the Dead 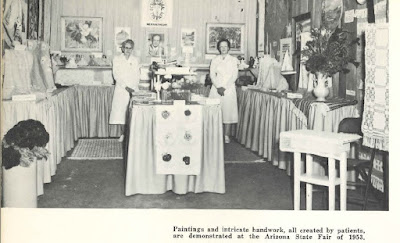 Dance of the Dead is another episode rish in material relevant to The Village's status as a hospital and commentary on contemporary psychiatry, so I will attempt to deal with it in the order it appears in the episode. The overriding theme is the public face of the institution and its private operation behind the scenes.

In my last post, about Checkmate, I commented on the way power was never as clearly hierarchical in the hospitals as it would appear to be, and how in The Village there would likely be a number of long-serving staff members who would resent Number 2. Sure enough, at the beginning of this one we see exactly this happening: Number 40 takes it upon himself to get the 'information' out of Smith without waiting for orders. In fact he expresses frustration at the length of time doing things under orders can take, and believes he knows better than his superiors. This is exactly the kind of thing I was referring to.

Smith continues his refusal to give in to the institution and maintains that he is not bound by the rules of The VIllage when asked about the cat. Ironically, of course, the cat belongs to Number 2, so if pets aren't allowed she isn't following the rules of her own hospital. Given that she also has staff who carry out experimental treatment without permission I can only see this particular institution ending in utter disarray! Smith in his intelligent fashion, wants to know how the supplies get to The Village, and he has concluded that they are delivered there at night when everyone is asleep.

This is also the occasion for Smith to make his comment that he has never seen a night in The Village. This is usually taken as an indication that he is brand new there. However I think it refers to a phenomenon that is well known among the staff of psychiatric hospitals and which I'm going to introduce you to if you don't know about it. The rituals in the evening in hospitals include the final drug round of the day and the patients will be given their regular medications. However most patients will also be prescribed medications on an as needed (the Latin medical jargon is pro re nata, abbreviated to PRN) if they can't sleep or if they need to be calmed down, or for any other need that isn't routine. There are some staff who will regularly PRN the patients at night, resulting in everyone sleeping (there was a nurse at Highcroft Hospital here in the second city known as 'PRN Tom' who never had anything other than a quiet night. I've changed the name.). I would suggest that the reason Smith has never seen a night in The Village is that all the patients are thoroughly tranquillised into a quiet night's sleep and so of course he never sees the supplies being delivered. I do not think that he is brand new at this point because who the hell gets involved in a dance on their first night in either a hospital or prison? In fact I think the medication explanation is a better one for this statement. The PRN medication is obviously in the drink he is given in his bedroom.

I find it very interesting that Number 2 makes a report in the evening. This is another totally classic example of things that are done in a hospital. Now that patients have individual notes it tends to be called handover as one shift hands over to the next, however previously anything of significance about the shift would be written in the report book and handed over to the next shift in a gathering called 'report'. Here is an example of an actual report book from Essex County Hospital (Image source): 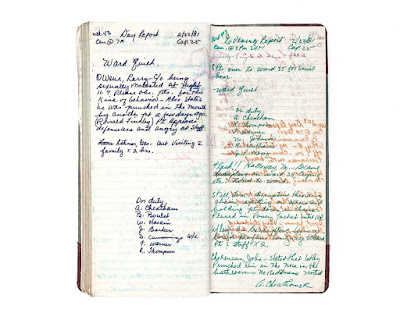 Surely by this stage Smith attempting to abscond must have been a regular event for the staff in the evening? Once again I think Rover is best considered as being Smith's own unwell perception of what is happening, as is the incident of the dead body. Because however you interpret The Village does anyone seriously think they would be so incompetent as to leave dead bodies lying around?

Smith's costume for the dance is his normal clothes rather than the institutional Village jacket he normally wears. I honestly don't think there can be a clearer demonstration that The Village authorities want him to be himself, or possibly return to his normal self. It is also a clear indication that The Village authorities want him to get better and leave - he isn't here for life.

Once again Smith has an 'observer' all to himself which Number 2 refers to being reserved for 'our more fractious children'. This is the psychiatric practice of specialing or observing for more risky patients which I have referred to as above. He is 'on obs' to use the jargon phrase. To use some more of the profession's jargon, the observing nurse isn't very good because he's notoriously a nightmare but she has managed to 'lose her ob'.

I would suggest that the carnival and ball are clear examples of the sort of dances and performances familiar to many total institutions of the past: in fact the Titicut Follies documentary is so named after a performance put on by the residents in the course of the documentary. It is likely that all of these performances are usually taken as an occasion for outsiders to the institution to be invited, for the institution to show itself under a good light, in other words in true institutional fashion they are really for the benefit of the institution rather than that of its residents, and of course it can come as no surprise that Goffman characterised these demonstrations as institutional display:

'Institutional display may also be directed to visitors in general, giving them an "appropriate" image of the establishment - this image being calculated to allay their vague dread about involuntary establishments. In the guise of being shown all, the visitors are of course likely to be shown only the more prepossessing, co-operative inmates and the more prepossessing parts of the establishment. In large mental hospitals, modern treatment such as psychodrama or dance therapy may come to play a special role in this regard, as already suggested, with the therapist and his crew of regular patients developing the kind of capacity to perform before strangers that comes from constant experience. Furthermore, a small group of pet inmates may for years handle the task of escorting visitors around the institution's Potemkin village.' Erving Goffman: Asylums. Garden City: Anchor Books, 1961, pp. 102 - 103.

When Smith escapes the dance and goes to a part of The Village that is obviously reserved for staff he changes he identity by putting on a white coat. Of course a white coat is a symbol of old fashioned psychiatric hospitals as well as scientists.

I suspect that this Number 2 is one of those sadistic types of leaders that you find in nursing and I would suggest that the kangaroo court at the dance was actually caused by Smith being confronted in some way for his possession of the radio or some other infringement of the radio. Obviously Number 2 wanted this to be seen by any visitors as an example of how she maintains order in The Village (although she doesn't), however I think once again we see it through the eyes of Smith and that's why it is so bizarre.

Dance of the Dead is in my opinion one of the better episodes for an interpretation of the series where The Village is a hoospital and Smith is a patient. This is largely because The Village behaves in an institutional way and makes several references which are relevant to mental health.