The Prisoner in the Asylum: Arrival Part 1

Since Arrival is ours and our Prisoner Peter Smith's first introduction to The Village, there is a wealth of material and I will deal with it across two posts. This one, the first, will deal with the nature of The Village itself in the light of the psychiatry and criticism leading up to the end of the sixties, and the second will deal with Smith's admission to the hospital, the significance of his admission and will reinforce some of the points made in the first post. 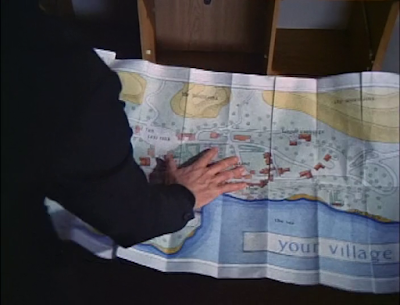 The show immediately draws our attention to The Village, even before it starts to explain anything about Smith. Cafe, taxis, shop, map, Village - this is the order the show introduces the Village. The map indicates that there is nothing outside The Village and I would suggest that that is because The Village is a particular sort of institution called a total institution. At the time the identification and criticism of these was much associated with the sociologist Erving Goffman:

'A basic social arrangement in modern society is that the individual tends to sleep, play and work in different places, with different co-participants, under different authorities, and without an over-all rational plan. The central feature of total institutions can be described as a breakdown of the barriers ordinarily separating these three spheres of life. First, all aspects of life are conducted in the same place and under the same single authority. Second, each phase of the member's daily activity is carried on in the immediate company of a large batch of others, all of whom are treated alike and required to do the same thing together. Third, all phases of the day's activities are tightly scheduled, with one activitiy leading at a prearranged time into the next, the whole sequence of activities being imposed from above by a system of explicity formal rulings and a body of officials. Finally, the various enforced activities are brought together into a single rational plan purportedly designed to fulfill the official aims of the institution.' Erving Goffman: Asylums. Garden City: Anchor Books, 1961, pp. 5 - 6.

Goffman saw the huge asylums as one of several types of total institution; significantly prisons are another typical type of total institution. It is important to situate this identification and criticism within the historical context where the asylums were already facing criticism for the institutional rather than therapeutic nature of their care. As far back as 1930 the law was changed in Britain to allow the idea of voluntary admission to hospitals for treatment; incredibly, previously you had to be certified to go into one of the old asylums. From the second world war there were ongoing moves to focus the patients' care on the world outside rather than staying in the asylums. A recurring feature of this change is that care of the individual should be about the individual rather than about the rules and needs of the institution - the relevance of this to The Prisoner is of course immediately obvious.

I would suggest that The Village is clearly a total institution of the type identified by Goffman. All aspects of life are clearly lived in the same place and under the same authority, in the company of a large number of others, with all activities tightly scheduled and controlled, and these things are designed to fulfil the aims of the institution rather than any of the residents.

Because like the Village, the old hospitals were total institutions and you didn't go outside, they also contained everything you needed. That The Village is totally sufficient for anything you could need life long is stressed with a sledgehammer lack of subtlety by the funeral we see in Arrival. Not only is a resident not returned to their family for their funeral, but the funeral is conducted in the style of The Village.You are here for life, and The Village will provide all your needs, including food. Many of the big asylums were designed to be as self-sufficient as possible, including having farms that the patients would work on (Arizona State Hospital is certainly an example of a hospital that had a farm, although The Village obviously doesn't and in fact later on in the series Smith wants to know how food and other supplies get to The Village).

The tour Number 2 takes Smith on is presumably designed to emphasise the totality of The Village, and I will take the liberty of comparing aspects of the tour to pictures in a number of Arizona State Hospital's annual reports to show the similarity between The Village's and other hospitals' pride in their institutional facilities:

'Quite a beautiful place, almost a world on its own. [...] We have everything here.' 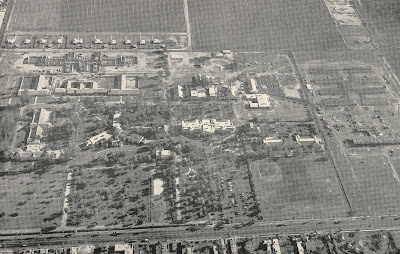 'There's the council building. We have our own council, democratically elected. We also use it for public meetings, amateur theatricals...' 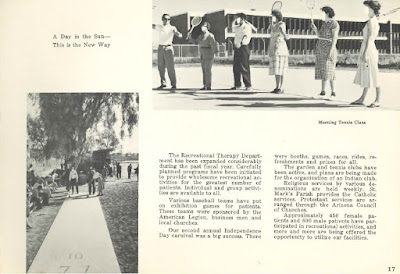 'Did you know we have our own little newspaper?' 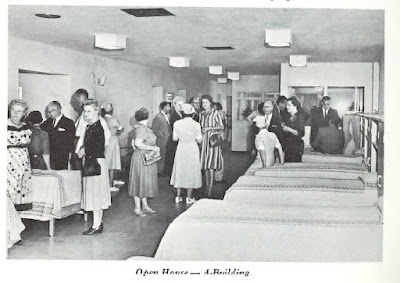 'You'd be more interested in our social club, I think.' 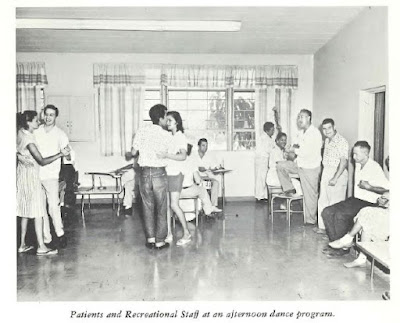 'If you have any problems, there's our Citizens Advice Bureau.' 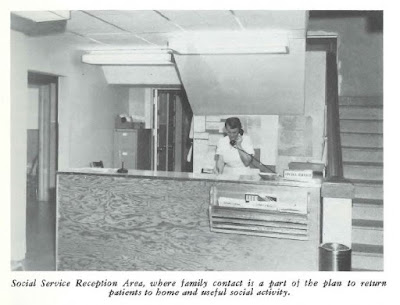 'They're the senior citizens, of course they have every comfort. You see, you get looked after here.' 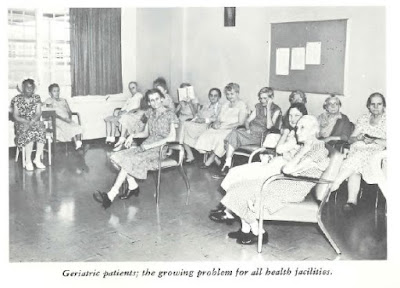 How do we know that this is a psychiatric clinic rather than anything else? There are many features specific to psychiatric hospitals although I would argue that we are seeing everything that happens through Smith's eyes and some of what we see in this episode is influenced more by his mental state than by objective reality.

The woman with the men who pick him up on the beach after his absconsion attempt is clearly a nurse, as is the 'maid' sent by the labour exchange and I would argue the men on the beach are as well. The fact there is a separate clinic for unwell patients does not detract from The Village being a psychiatric hospital of the old sort: in reality when you spent decades in a hospital you wouldn't be equally ill for all that time and the huge hospitals had separate areas for patients with poor physical health as well as variations in mental health - specifically separate wards for rehabiltation and ones which used to be called Disturbed. The system of alerts will be familiar to anyone who has set foot in a psychiatric hospital where the staff will always have means to raise an alarm or summon help. Of course, hospitals are among the places you are given a number - I would guess they are used rather than names in The Village because of the likely high profile nature of the patients. The piped music is very reminiscent of the music played by Nurse Ratched in One Flew Over the Cuckoo's Nest. I would suggest that the slow speed of the 'tractors' the electrician uses is a reflection of institutional time - you're not going anywhere and don't really have much to do so things are slowed down to fill up the available time.

The woman getting up from a rocking chair when he comes to in the hospital wing of the asylum introduces us to a trope of mental health care which isn't widely mentioned in the literature, but I'm going to introduce you to this character and it will certainly be familiar to anyone who has worked in mental health. She is the familiar character known as the barmy nursing assistant  - they are often characters who will have worked in the hospital for many years and if they weren't odd to start off with they will have been made so by the institution. When you look at these people you find yourself wondering what their own mental health is like but much of what they do can also be explained by institutionalisation. They are often characterised by carrying lots of unnecessary stuff about with them, often in a bum bag for some reason, refuse to use the patients' crockery and cutlery as if superstitious or schizophrenia is contagious, and frequently are noticeable for singing hymns to themselves. They are a strange mixture of loyalty to the institution in terms of keeping turning up and loving the place, and usually quite poor care mixed with being utterly sweet so that the patients love them and don't feel they can complain about them. This is ironically the exact type of loyalty referred to several times in this episode - of loyalty to your masters and the institution rather than to anything which is right, and kept staff loyal to the institution for decades, failing to see abuses and in fact participating in them.  These staff members should usually have been retired off years ago - in fact recently a former colleague was telling me about a woman in her late seventies continuing to do shifts. What the lady here is doing to explain why she is sitting with him is the intervention known in mental health care as observation or specialing (or sometimes high dependency observation) with a patient who is considered to be in a risk in some way so can't be left to their own devices.

I must just mention Rover by way of introducing the tack I will be taking to explain away  deal with any contradictions to my scenario. I have said that I think the series is seen through Smith's eyes and we must remember that he is mentally ill. Therefore some of what we see can be explained by us seeing things through his paranoid eyes. I would therefore suggest that Rover is simply what he obviously is, a weather balloon, and is misinterpreted by Smith as a murderous device of control because he is paranoid. It isn't possible for a weather balloon to go around killing people. His paranoia is further fuelled by the fact that he is being surveilled in the hospital - of course he is under observation, he is a new and potentially dangerous patient.

I think we can gauge the true nature of The Village as an institution by the way they are prefectly prepared to manipulate and lie to Smith about Cobb's pretended suicide as early as his first evening to find out what he has done with Seltzman's body. They're even using Smith's own defensive vocabulary of 'resigning' from his fantasy spy role to do so.

In Part 2 on Arrival I will consider Smith's actual admission to the total institution of The Village.