Showing posts from April, 2015
Show All

(Whatever Happened to the) Likely Lads: Second Impressions 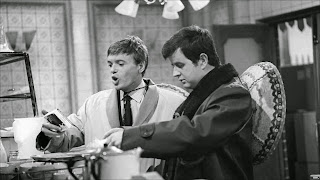 In my last post I came to some probably premature conclusions about seventies TV which could best be summarized in the phrase, 'rush back to the sixties'. That was fully my intention, until I spotted the boxed set of The Likely Lads in a charity shop. Since it was absurdly cheap & the Society of St Vincent de Paul used to visit our mother, I bought it, despite not having favourable memories of the 1970s return of the show. In my real/unreal division of TV shows, this one would definitely come into the real category. In fact it was the first public collaboration of two of the big names of British television: 'Taking a BBC course in directing for television, Dick Clement was tasked with making a short production using one studio and a £100 budget. Stuck for an idea, he turned to drinking companion Ian La Frenais, and the duo worked up a notion they'd originally conceived as a comedy skit for the BBC's in-house drama club, the Ariel Players. 'The result was a s
Post a Comment
Read more
More posts