Showing posts from March, 2021
Show All

By John - March 26, 2021
I have so far fought shy of writing about this series, purely because it is so huge, involves so many story arcs and is so variable. In various places it is definitely stonking good television, but in others represents the worst of 1970s TV. I intend, now that I have broken into it, to do a master post to try to get the show into some order in my head, but this post is about the Secret Weapon story, broadcast in February to March 1975 as the first four episodes of series 3. The series was well underway by now and the essential elements are in place: the next stage of human evolution 'breaking out' as Homo Superior, jaunting using the jaunting belts, etc. In many ways I would see this as the natural progression of the scientific interests frequently mentioned in the TV of the preceding decade, just with the added idea that humanity would progress enough to evolve to the next stage. In the seventies this probably wouldn't have been seen as wildly unrealistic. I do think ther
Post a Comment
Read more 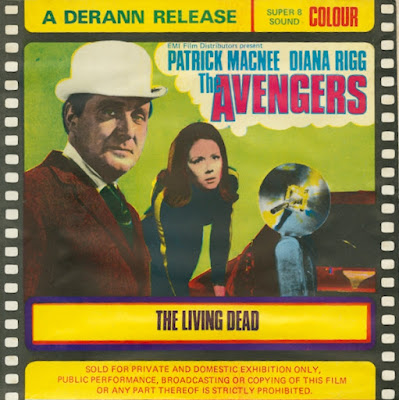 I love this episode, however have fought shy of writing about it because it manages to pack so much in, viz. 1. The Hammer style beginning. I actually think it is one of the nicest Avengers imitations of other genres. 2. Actually perhaps it's more in the style of Amicus because it is set in the present day and includes dialogue about the reality or otherwise of ghosts. I love the Avengeresque acronyms of the two ghost investigating groups, FOG and SMOG! 3. The episode is set against the noblesse oblige background of the Benedict estate. Very classic Avengers setting of the great and the good gone wrong. 4. The caricatured British setting is influenced by a very stereotypical foreigner. 5. It isn't explicitly mentioned but the noblesse oblige setting is not totally beneficent to the workers. The Benedict family not only formerly operated a mine, never a very safe or pleasant place to work, but the operation was brought to a close by an accident. However the dukes of Benedict are
2 comments
Read more
More posts