The Prisoner in the Asylum: A Change of Mind

How do you even begin with the sheer psychiatric richness of A Change of Mind? There is straightforward behaviour modification, which has already been mentioned in Checkmate and which I shall focus on when I get to Hammer into Anvil. The way the 'community' makes pretend decisions over other people is very much a caricature of the contemporary therapeutic communities movement, which I will focus on under The General. There is the whole thing about being disharmonious, which sounds about as much like having an Antisocial Personality Disorder as you could want, and which I'm going to focus on under Do Not Forsake Me Oh My Darling.

Which still leaves loads of stuff for A Change of Mind! It seems to me to reference two psychiatric treatments, both in vogue at the time, namely the whole collection of operations to the brain popularly known as lobotomy and more properly called psychosurgery, and the other intervention called seclusion. They are both still in use in the UK to the best of my knowledge, although seclusion is something which went very much out of fashion in the nineties with its associations with padded cells. It has been illegal to use compulsory treatment powers (more of them anon when we come to Many Happy Returns) for psychosurgery here since 1983, and since then a miniscule number of the operations have been carried out with consent.

I am going to have to say something very plainly again, which is that honestly it's a bit difficult to my mind to see how this episode models anything other than a psychiatric hospital of the time: you have a large captive audience on whom various pressures are exerted to conform. Eventually the majority are manoeuvred to exert pressure on the one person who stands out and he is scapegoated and treated as unmutual. Finally he is given a fake operation to make him conform or give them the 'information'. I should stress that this is exactly the set up in many of the old hospitals - the desperate people who would conform because they were terrified of punishment, the bullies who like to exert their meanness in the institution, the pretence that the community make decisions here. In my last post about It's Your Funeral, I mentioned that the stuck feeling of institutions can make you do desperate things because you have nothing to lose, and this episode more references the effect of conformity in institutions and the use of peer pressure to promote conformity. Finally please note the men in white coats. This is presented as a genuine medical procedure that could have actually been done to him to sever the frontal lobe but is a pretence - presumably because he is too precious or well-connected. I think the pretend nature of the operation is a plot weakness because who would think for an instant that Number 6 wouldn't notice that nothing had changed in his own head?

As I said above, I feel the whole process of being unmutual reflects the long psychiatric tradition of seclusion, time-out, quiet time, call it what you will. You either get someone to leave a situation or go into a different one for a discrete period of time. That's it, that's literally all there is to it. In its more developed form of seclusion you leave someone in a room which is set up so they can't hurt themselves and is very low stimulus and wait for them to calm down - because it isn't humanly possible to remain in one cycle of being wound up. Things like snoezelen rooms are also designed to do the same but with specifically calming stimuli. Anything which means going somewhere and modifying your emotions and hormonal system is basically out of the same stable. That's the treatment side, but what A Change of Mind more references is a misuse of seclusion and similar approaches as punishment or as behavioural change technique. It's basically the naughty step approach that we've all seen super nanny use. I am sure no mental health professional will deny that treatments have been misused and simply isolating someone is punishment pure and simple and doesn't have a therapeutic element at all. Nonetheless I feel like seclusion is referenced in this episode.

The fact that the version depicted here with ultrasound isn't actual treatment of any sort or even real, is reinforced by the strange time sequence around the point at which Smith becomes unmutual. It takes literally minutes, Number 2 threatens him with social conversion, and next thing they come for him to give him the social conversion. It is so obviously not real! Once again I feel that everything we see in the show is seen through Smith's eyes and filtered through his own mental state.

The way the social conversion is done is very akin to the way brand new pioneering treatments are shown off in the medical profession. Presumably what was new about it was the ultrasonic element to it and that was why it was displayed to all the resident medics. In fact by this time the idea wasn't new at all, and the leucotomy, the original form, was discovered in Portugal by a neurologist called Egas Moniz, and the first one was carried out in 1935 before the operation even had a name (the theory had been around for a long time and there had even been disastrous attempts to try to do it at the end of the nineteenth century).  Incidentally the only place I know of that has any number of staff psychiatrists resident and all ready to view operations, is a psychiatric hospital and nobody is going to change my mind!

While the treatment is referenced, it is clear that although psychosurgery was a proper treatment which although incredibly unsophisticated and destructive did make a minority of people calmer and less distressed, the main purpose here is behavioural. I am going to stick to my approach where the extraction of information is part of Smith's mental state and either misinterpreted or not real, because honestly, the man's solidly refused to give it up so far, how is pretending to give him an operation going to change anything? This is one of the situations where I think a psychiatric explanation helps to tidy up some of the loose ends of the show, and I think social conversion's purpose was actually to obtain the sort of passivity and compliance we see in other residents. In fact this was a function of actual psychosurgery. I have not been able to obtain the whole book but this is an illustration of a 'case' from Walter Freeman's book about his transorbital lobotomy procedure and as far as I can see all that changed was the poor woman stopped complaining about her eye: 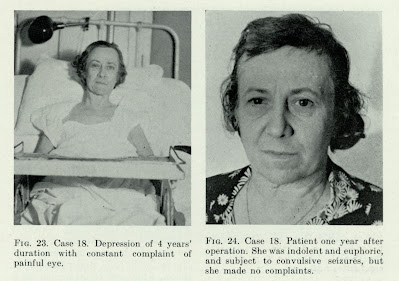 So that's alright then. No complaints is exactly what The Village is after.