I am indebted to Grant Goggans's ecxellent and thoughtful TV blog, firebreathingdimetrodon.wordpress.com, for bringing this show to my attention. I like Grant's style of writing about shows, one episode at a time, and of course his son also gets to comment on the shows. While the world of cult TV on the blogosphere may be a largely self-referential one, it pays off when we bring new shows to each other's attention. 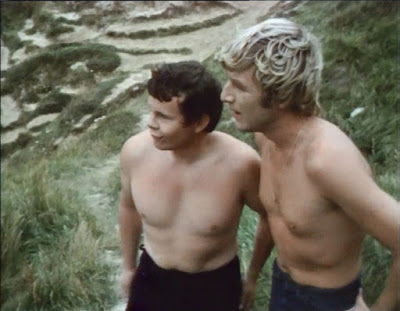 Now I know I have been thinking about accent quite a lot recently on here, largely through watching Murder She Wrote for the first time in many years. The question of accent isn't really one I comment on here a great deal, believing that viewers will understand the intended impression given by the chosen accent of a character. Come to think of it, if viewers of the TV series I write about here see the subtle nuances of class as exhibited in the various British accents differently from my own view, I don't think it really matters. A good TV show is understandable on all sorts of diffferent levels.
The point of this discursion into accent is that it is a very obvious indicator oh who is who at the beginning of this series of Freewheelers. I have the Series 6 DVDs, which are the only ones 'officially' released, although the other remaining series are available on the the internet at great expense. This series begins with two escapees from prison (Ryan and Burke, played by Richard Shaw and Michael Ripper). They are marked by their very obviously working class and ruffian accents. On the other hand, our heroes (here Sue and Mike, without Steve - Wendy Padbury, Adrian Wright, and Leonard Gregory respectively) are marked by their Received Pronunciation accents. In fact, I would go so far as to say that the marked distinction immediately puts us into Famous Five territory. Come to think of it, beyond the Famous Five's secure world of Our Sort of People, I would go even further and say that Freewheelers may even take us into a parody of the world of the Famous Five. I mean the sort of thing The Comic Strip did so well in Five Go Mad in Dorset.

Murder She Wrote: Sing a Song of Murder 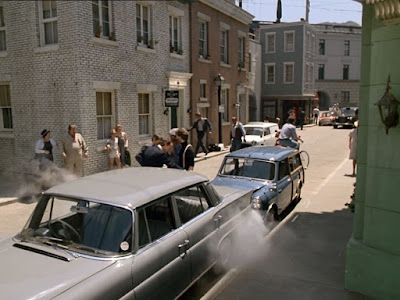 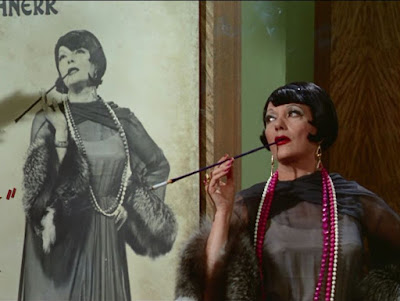 I thought I had already blogged about this episode but I'm damned if I can find it! Well even if I have I'm going to blog about it again because I like it so much, even though it seems as if the fans are rather divided about this one. I genuinely can't think why! Perhaps I had better say in advance of anything else that my thoughts on this one will be heavily influenced by the interview with Petunia Winegum included on the Optimum box set.
I have a feeling that the reason this one doesn't go down well is because of the huge number of great actors in it. I don't mind this myself - they are great enough that they don't distract me - but the sheer array of talent may distract from Steed and Mrs Peel for the fans. One of the things Petunia Winegum says in the interview is that this one was mooted to be turned into a feature film, which I think would probably have been a mistake because it both parodies the world of the silver screen and there's way too much unreality in it!
A TV script parodying the world of the silver screen is of course not really the material for a feature film. Much of the point of Epic is that it parodies real people and what we would now call 'tropes' of the world of film. This is only what so many other Avengers episodes do, but in the case of Epic virtually every aspect of the film world gets parodied at once. It is for this reason that I think this sort of script is so well-fitted to Peter Wyngarde's personality and acting style. He fits the sheer theatricality of it - it is as if he is actually playing an actor playing a vicar, for example - just as he fitted the character of Jason King so well because it was unreal.
Epic is, of course, the point at which the unreality of The Avengers becomes so postmodern and reflexive that it can begin to get confusing! Of course The Avengers is a series heavily built on unreality anyway, and the point is that in Epic everything is unreal. We start by seeing that Emma's flat is set in an area which is visibly not real (even before she later wakes up in the 'set' of her flat and then puts her hand through a wall). The action moves to a location scene which is obviously real country, but into the middle of this comes Petunia Winegum as a caricature of a vicar. The reality and the unreality can so mess with the viewer's head that it is impossible to know what is real. The arrival of the vicar into this pastoral (yet obviously dangerous) setting reminds me of nothing less than the world of Agatha Christie - a world of chocolate box villages where nothing ever happens and yet there are regular murders.
I suspect that this is the point at which Epic risks losing the fans - I remember when the film came out I was holidaying in Oxford. I saw it several evenings running in Oxford and then later saw it again in Birmingham. The audiences in the two places clearly took different approaches - the audience in Oxford approached the film as a bit of fun and roared with laughter, whereas in Birmingham there was a dead silence, and you just knew that these people were hard-core Avengers fans who were taking this travesty of their favourite TV series very seriously indeed. Epic's big weak point is that if you approach it too seriously it falls apart, and it wants not to be taken at all seriously.
And yet... And yet... while Epic carries on as a spoof of pretty well everything ever committed to film, the danger throughout is very real indeed, and the Avengers' suspicions of what is happening are aroused right from the start. Again shades of Agatha Christie's cosy world full of murderers. I think this is where a valid criticism of Epic can be made - Christie's world is cosy yet murderous. The world of Epic is parodic and yet murderous at the same time. I think that probably a lot of people would have a difficulty with these two things sitting together and would want Epic to be more clearly in one camp or the other.
All that said, Epic is one of my favourite Avengers episodes because the famous unreality peaks in this episode and thus it may actually be the best illustration of the world of The Avengers.
Posted by John 2 comments: