Orphaned Episodes: Some (More) Shows Worth Checking Out

I seem to have come to the end of the orphaned episodes I have for now, and this post is to gather together some shows that I think people might like but I don't think I can squeeze a whole post out of each one. I still have one separate post to publish with my reflections on this journey down the junked TV rabbit hole. 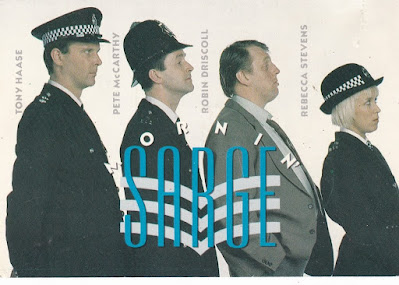 Mornin' Sarge (1989) is a single season comedy set in an incompetent police station and made by the team behind They Came from Somewhere Else. You can read the story behind this team here. Not to beat about the bush I think this show may be a bit Marmite, and online opinion seems to be divided between raving about it and a few people saying it wasn't much cop (geddit?). The pilot episode has got loose on the internet.

Mr Majeika is an almost legendary children's TV series about a wizard who has failed his exams seventeen times so is sent to earth to teach in a primary school. He's told not to do anything magical so of course we know how that is going to go. It is a gentle, sweet show much loved across generations. Unusually for the shows in this series of posts this show has most of its episodes (but not all, so it does count as an orphan) on YouTube. It is unlikely ever to have a commercial release because it was made by TVS who have featured in these posts before because their records have gone missing, meaning who owns what can't be proved so commercial release is wildly unlikely. Hey, it also means nobody has the commercial interest to remove whatever is already online.

There isn't a huge amount about it on the internet but Take Three Girls was the BBC's first colour drama in the sixties. It is about three girls sharing a flat in London and each episode focuses on events for one of them at a time. I think it probably accurately captures the real flavour of sixties London. But then they say if you can remember the sixties you weren't there, so it's probably just as well the cameras were running. It is a really orphaned show because many of its episodes are wiped but some of them have been uploaded to YouTube by one of the actresses. Another very sixties aspect is the theme which became a hit, and is a piece called Light Flight by the folk-rock band Pentangle:

There was a follow up series in the eighties called Take Three Women and there are also some of them online. I haven't seen them so can't say what they're like.

I'm not convinced it's strictly speaking orphaned but there are odd episodes of Rooms (1974 - 1977) online and it is showing on Talking Pictures TV. It appears on the wiped episodes boards but there is no clarity about what is present or missing, as far as I can see. It is in effect an anthology series about the residents of a rooming house in Kensington. There isn't much about it in the blogosphere and I think you would like it if you like studio based dramas. Each one comes in two episodes.

Harry Enfield's Television Programme (later changed to Harry Enfield and Chums) was the major 1990s vehicle for this hilarious comedian. The show is technically orphaned because while you can buy home made DVDs of it and some extracts on commercial VHS, planned commercial DVD releases have been cancelled and it has been removed from streaming services. As I write this I'm just watching a sketch in which Mr Cholmondley-Warner is talking about what social clarss Mr Hitler belongs to.

A snobbish, upper-crust 1930s newsreel presenter (played by Jon Glover). Miles Cholmondley-Warner ( /ˈtʃʌmli/), with his manservant Greyson (Enfield), would expound on various issues of the day and attempt to uphold the British Empire's values. In the second series this gave way to a series of public information films that would advise, amongst other things, that women refrain from driving and participating in complex conversations (as this would lead to insanity) or that babies be given gin to ensure a good night's sleep. Source

Surely I can be forgiven for mentioning one of the more eccentric parts of my childhood? Rentaghost was a long running children's show about an agency which rents out ghosts for various purposes. Probably this show could only have been made in the seventies! It meets my orphaned definition because while some series have been released on VHS/DVD and some series are available for streaming, others are not. Much of the show was sold in the nineties but is said to be back in the BBC archives. A number of complete episodes are available on YouTube and I would particularly recommend the Christmas special. It's a sweet souffle of a show.

Whack-O! (Elsewhere Whacko!) was a show broadcast at the end of the fifties which returned in the early seventies. To be honest a show with a decade's break in the middle which can't even decide how to spell its own name was always going to be a contender for the Orphaned Episodes list. It starred the legendary Jimmy Edwards:

Edwards took the part of Professor James Edwards, M.A., the drunken, gambling, devious, cane-swishing headmaster who tyrannised staff and children at Chiselbury public school (described in the opening titles as "for the sons of Gentlefolk"). The Edwards character bore more than a passing resemblance to Sergeant Bilko as he tried to swindle the children out of their pocket money to finance his many schemes. Source

There are some odd episodes online. There was a 1959 spin off film called Bottoms Up! and there was also a radio series. The repeated themes of bottoms and canings in the fifties version (absent in the seventies version after the sexual revolution) mean that this is a series which will come across as all sorts of wrong now.

Another indicator of how TV has changed since the fifties can be found in the ATV Midlands show Lunchbox (full episode here). It's like a radio request programme and is about as low budget as you can get.

Barriers is a 1981 series intended for children about a young man who only discovers after the death of his adoptive parents that he has been adopted and ends up going across Europe in a search for the truth. It was written by William Corlett which means quality writing with no looking down on the young people. There is a lot of fondness for this series on the internet but be warned there is also a lot of confusion. It's orphaned because series one is on YouTube but series two isn't.

Telford's Change was a single series show in 1979 with the familiar theme of the time of a senior manager in a bank doing what we would now call downsizing to get away from the rat race. At the time apparently Mary Whitehouse said it was sexy but said she liked it. Such damning praise which means it wasn't sexy. There are several episodes available on a single YouTube channel and they're all called episode 1, so good luck if you give this one a go.

Despite The Newcomers being the BBC's most popular soap opera until EastEnders (Source) I had somehow managed never to hear of this late sixties show created in direct competition to Corrie. There is relatively little online about it and it's not out of the weird sixties stable. In fact it reminds me of nothing more than.... Coronation Street! There's a whole episode on YouTube.

I remember it fondly, but that is probably because I was a kid and didn't know any better. For this reason I was delighted to find there is a number of whole episodes of Triangle on YouTube (the 1981 to 1983 show, not the later show of the same name). It is frequently described as the worst TV programme ever made although it did garner some fans:

Triangle writer David Quantick says: “I think Triangle was actually East Germany’s number one soap opera when it got transferred to the BBC by accident. I don’t know what was on the other two channels to make Triangle so popular. They must’ve been showing footage of brick walls. Or beatings.” Source

The Love Boat it is not and I do wonder whether Triangle was an inspiration for Acorn Antiques:

The Borderers was a 1968 to 1970 historical drama following the conflict between England and Scotland, and the reformation with reference to one particular family on the border with Scotland in the sixteenth century. Nearly half the episodes have been wiped but it gets consistently good reviews and there are some episodes on YouTube.

I'm gutted that there isn't a whole episode left because the whole thing was junked but there are surviving clips of the music spots on the seminal series Ready Steady Go! These again only survive because of one person wanting them:

The show was cancelled late in 1966. Michael Lindsay-Hogg, one of the directors, once said, “Most of the shows were wiped because tape was so expensive, so stuff like the James Brown special and The Who special are gone forever. I took home £37 a week but, every so often, I’d buy a video tape and preserve it. It cost me £1 a minute, but the only reason any shows survive is because I did that.” Source

There is a documentary about the show and I think readers will recognize some graphics similarities to The Avengers:

A Kick Up The Eighties is another alternative 1980s alternative comedy show. It's the one where Rik Mayall notably plays Kevin Turvy, from Redditch, and is credited as Turvy, not himself. Some episodes have got loose on the internet.

The Expert was a police procedural series broadcast from 1968. It was about a forensic scientist and his part in investigations. I have read both that it was the first or among the first colour series, although that, its technical proficiency and popularity at the time didn't save much of it from being wiped. There are a few episodes on YouTube. The only reason I'm not doing a whole post on one of them is that one of my few failings is that I can't get into police procedurals or courtroom dramas and they just send me to sleep.

I'm not about to do a whole post on one because you'll think Derrida has taken over the blog if I start posting about orphaned episodes of a show about TV shows! But I know that if you are reading this you will love Clive James on TV, in which he talks about some of the wilder frontiers of television internationally.

I think there's a US show with the same name but there are also some orphaned episodes on YouTube of the long running funny magazine show That's Life. And incidentally that means I have to introduce you to my favourite interviewee on the show:

At this point I discover to my shock that the US version of Candid Camera ran on and off from 1948 to 2014. There are some episodes of the UK version online and as ridiculous as ever.

And finally some links to shows I've previously blogged about which would meet my definition of orphaned episodes: