Dial M for Murder: The Contract 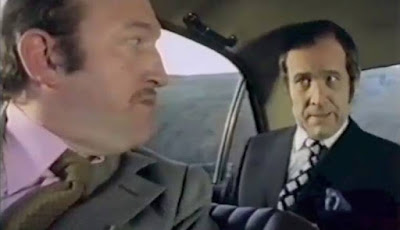 It turns out there are at least a couple of films and TV series called Dial M for Murder, but this post is about this show. It was a 1974 series of mysteries whose common feature was that they involved a phone. As far as I can see the show has never been issued for home viewing and seems largely to have vanished completely except for this one episode which the Ian Hendry website have kindly uploaded to YouTube. You can watch it here. The show has a number of reviews on imbd, including from under 25s and I can't think how people have seen it unless they are reviewing this episode or reviewing one of the other Dial M by mistake.

And it is at this point I can't guarantee that the rest of this review won't turn hysterical because Ian Hendry and Robert Lang play a gay couple who murder people on contract. - Pause for laughter- I'm not going to lie, my very first impression is that this show must have been wildly racy for 1974. It wasn't long since the Sexual Offences Act of 1967 had legalised sexual acts between men over the age of 21 in private. So a mere seven years before the couple depicted would have been breaking the law. I am sure this legalisation was not welcomed by a large part of the population, and I can't think of many shows of the age that don't crack jokes about the gays. So a show which showed that gays could be normal murderers must have made a few heads explode.

I think the show has actually bitten off more than it can chew - the situation would probably still provoke headlines if broadcast today and it feels like this is a show trying to do two things, and you're either going to focus on the relationship or the contract killing, but both together is a bit too much.

Lang and Hendry actually manage to do the relationship bit perfectly. Both show the sheer versatility of their acting - I hadn't heard of Lang but he was a Shakespearean great. You know when you're around a couple and they just let enough of their relationship out that you know they're sort of bickering but you know it could turn into passionate sex at any moment? That is exactly where Hendry and Lang pitch it. I mean, there are loads of people on the internet who think Steed and Mrs Peel were an item, on much less evidence. I feel that Hendry relishes the role much more - authentically overdoing the gay thing as it should be. At home he is all chest hair in an open cardigan (and how much hair can one man carry - how come he got it all and I got none?) and I love the fur coat and wig he wears out.

The real irony is that one of the straight characters is played by Roland Curram, who I would have thought was gay, actually did later come out as gay. Gosh this gets complex. I honestly wonder whether this episode wouldn't prevent future commercial releases of the show, because it can come across as very stereotypical and could feed into a narrative that gays have no morals and are criminals. The more I think about it the more I think this must have really upset people in the seventies!

The crime bit tends to be rather overshadowed by the magnificent spectacle of Lang and Hendry. I have watched it twice and feel the plot is perhaps rather complex. Without making this a spoiler there is a place where the ethics of what is happening are considered, or reconsidered and influence what happens in the rest of the show.

There is a major plot twist at the end which I didn't see coming at all.

In fact the complexity of the plot and multiple layers of the show leave me with the clear impression that TV and our ability to understand have deteriorated in the past 30 years. It has taken me a couple of viewings to get a clear impression of this show and that would have been even more difficult on a single viewing.

Highly recommended. The only thing which stops it being stonking good television is the complexity of the plot and some rather seventies stereotyping.