Virtual Murder. A Bone to Pick 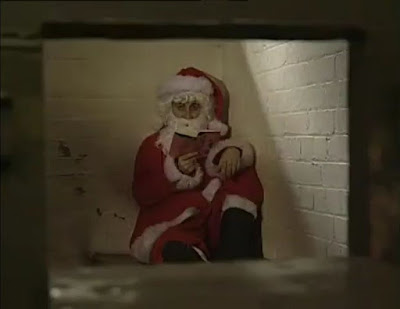 In my first post about Virtual Murder I said that it had picked up the gauntlet laid down by The Avengers. This episode is about a man, Roger Smith, who turns up to a police station on a bicycle and empties a bag of human bones over the desk. If I say that this man is dressed as Father Christmas (and played by Tony Robinson as guest star) you may be inclined to say that the show has blown up the gauntlet and turned it into a whoppie cushion and I'll tell you right now, it's glorious.

I particularly like when Smith uses his one phone call to ring Cornelius and dramatically play out that the police have attached electrodes to his tongue. This is the truly bat shit crazy world of English eccentricity (which is of course completely untrue, in no way are we eccentric) and it displays a procession of eccentrics for us. We're beyond eccentricity though because Smith has been a research project because he has pseudologica fantastica, and just lies continually. Psychologically very interesting condition, and I can see that it would be a tricky one to use in an entertainment programme. Most shows might have habitual liars but not apply such a clinical word to them. If you can overcome that discomfort it's magnificent. He pretends to be a member of the Scandinavian Secret Service, and that this has previously worked as a cover until Imelda Marcos recognised him. He claims to know Rupert Murdoch. He can't do Tuesdays because of his appointment with the CIA. He later appears on the TV pretending to be one of the leading forensic scientists in the world and says that he once reconstructed a murder victim from her lipstick and one eyelash.

The show turns this comedy on its head by then correctly identifying the reason Smith compulsively lies and it's pretty sad. This is the kind of emotional shock only really good TV gives you, and leaves you in a place where you feel so sorry for him but want to laugh at him as well. We also see his bedroom, which is that of the compulsive collector, and it's rather sad. This kind of discomfort and emotional complexity unfortunately doesn't make for popular television, and watching this episode in detail is giving me an inkling of why the show was never that popular.

Of course it's a bit difficult to investigate a crime when your first witness is a compulsive liar with a bag of bones. On the other hand as a suspect Smith has the advantage that he will confess to any crime you care to mention. The show then cleverly presents the bag of bones as if it is purely about a fantasy of Smith's and there is an innocent explanation, until he comes to the attention of some actual criminals. Then of course the investigation becomes much more serious.

I suppose this is a show which you will either love or hate but if I have a criticism it is that while I can only praise it for running with the authentic atmosphere of The Avengers it does get two things wrong. The first is that it misses out on the sexual chemistry of The Avengers, because the relationship between the two leads is more combative than to make you think they might leap into bed at any moment. The second is that this plot might be slightly too complicated for its comedic treatment and need more explanation of what is actually going on in places. For example we don't really know what the baddies are about for some of the episode. This is not to say that this show is not a good shot at carrying on from where the sixties left off; I think it would probably have settled down and really improved if it had made it past one series.

My absolute favourite bit is where Smith appears at the denouement dragged up as Dolly Parton.

I am going to say this and you will see how much I rate this show: this show is the best shot I have seen at the recipe which makes the great shows of the sixties so successful. There are also shades of Adam Adamant Lives here. They don't always quite get it right, but this is excellent, quality television, only slightly spoiled by not using a simple plot and so spoiling us with its riches.