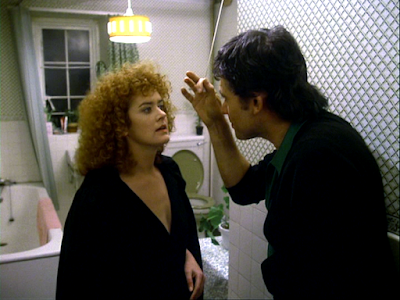 About nine months ago I mentioned a plan I had to write blog posts on each episode of the TV series Hammer House of Horror, and of course it seems perfect in the run up to Halloween.

In truth I'm a bit unsure about it because it is a series which is already extraordinarily well chewed over online (I am especially indebted to this website) and I wonder whether I will be able to make that much of a post out of each episode. Nonetheless I'll set off and see what happens.

Hammer House of Horror (1980) is an anthology series made in collaboration with ITC of fictional stories featuring anything vaguely strange, such as ghosts and Diana Dors (just kidding). It is one of those seminal TV series and deeply ingrained into our national consciousness, and so another reason to go through the show is that we are actually now living through it.

First up we have Witching Time. There are a number of very good synopses of the plot online and of course also a number of reviews so without further ado I can say what I feel like saying, knowing that you can get the sensible information elsewhere if you haven't watched it.

This show is incredibly layered and full of all sorts of weird stuff - these shows really were about anything horror and didn't focus specifically on one aspect.

If I have to decide what I think this show is about I would have to settle on it being a ghost story.

There is a strong moral element, because it is largely about David Winter, a composer, and his wife Mary, who is having an affair with their family doctor. So we are set up to see David as an innocent figure

The show draws heavily on the idea of the witch figure in the shape of Lucinda the 300 year dead witch who appears back in her old home suddenly. It makes an interesting use of the witch figure, which is far from a straightforward evil witch depiction: she has already been innocently killed so we feel sympathy for her, however she also does a number of things to David which are a clear depiction of the classic evil witch. She seduces David so that we continue to see him as innocent.

The ghostly element of the plot is rather subtle. The point is repeatedly made that Lucinda has died three centuries ago, but this is far from your standard ghost story and she's not your standard ghost. The fact that she makes David have sex with her (try not to think about the idea of sex with someone who has been dead 300 years) draws on the idea of the succubus, a female spirit who seduces men.

There is also a lot about women and a feminist reading of this show would be interesting. At the time this was written, although they were never academically accepted, a lot of popular ideas about the 'witches' killed in the witch hunts were circulating in second wave feminism and in the neo-Pagan movement. There isn't a hint of the idea that the witches killed in the witch hunts were part of a previous ancient Pagan religion, so the feminist interpretation fits better. In this interpretation the 'witches' were seen as an embodiment of female power (and particularly female healing) and so the witch hunts were seen as specifically a patriarchal persecution of women's power. In this show this is twisted slightly because what we see is two women in conflict, and the one who isn't the witch wins. The woman who models duplicity wins and the one who has already been innocently killed, despite the ambivalence, loses again. Lucinda does enchant David to have sex with her, so in a feminist reading, the patriarchal point being made is that women are seducers and temptresses who can't be trusted. This is even seen in the two scenes where David locks up Mary and Lucinda - the man is taking control of the woman's dangerous power to seduce. David as much as says to Mary that she is the one who should have been burned, but even this is the result of Lucinda's spell.

This show is genuinely so layered. You might question that it is mixing and changing so many different

There are two questions I have about the plot, though. The first may of course be intentional and it is that it is never explained really why or how Lucinda has come forward in time. There are several suggestions that it is because of Mary's affair, however this leads to my next question about the plot, which is that despite this inference, there is a sort of moral failure because far from being avenged, Mary actually 'kills' Lucinda, so in fact the person having the affair has 'won' and there is no apparent moral reason for the witch to appear. This is even without the question that she is, actually, dead, and can appear and disappear apparently at will, which makes all she does slightly difficult to envision practically.

Nonetheless this is a solid introduction to the series. What I particularly love about it is the wealth of seventies hot topics twisted slightly and moved to the eighties. 1980 exactly, admittedly, but it's noticeable that this show looks quite a lot different from the porridge colours found in early seventies TV. In true seventies style there is LOADS of sex and nudity - only the vicar manages to keep his clothes on, and as you know I love a show with sex and nudity.

My absolutely favourite bit is where Lucinda says 'I was born in this house in the year 1627.' - I know exactly how she feels.