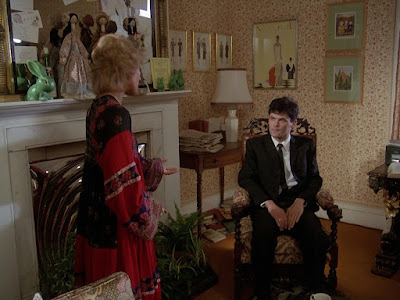 Rather mixed reviews on the internet for this one, mainly good. It seems to be one which you either love or loathe, and there are several poor reviews which say that it seems to go on too long and is boring. I think that that might partly be because this is the only show of the series which isn't about anything supernatural.

I commented in my previous post about the first episode of this show, that it had a possible feminist interpretation, and that is even more so in this one. For a start it's about the diet industry, which is of course overwhelmingly aimed at women, and is about Ruth Cairns, a female reporter, who is assigned to the dieting report even though she hates being on the women's page and believes that women are worth more than fashion shows.

This is some snappy story telling, using some magical omniscience. Ruth hears that her date has died, puts the phone down, is then at the funeral without wasting time explaining how she found out about it, and then the undertaker is confiding to her without wasting time explaining how he knows she's a journalist. It's when he confides what yhe's worrying about to Ruth that the story suddenly flips into a tale about a horrifying mystery. And it's an excellent mystery! It's a plot which would have worked well as an Avengers, and I would love to see Mrs Pee in the diet clinic pretending to be a journalist.

Cleverly, we are completely distracted by Ruth leaping to the wrong conclusion about the mystery. It also ends in a way which doesn't solve the problem but leaves us suitably horrified.

The two criticisms I have seen are that it is too slow and nothing happens, and on the other hand that you can see what is happening if you really think about it. I'm not convinced that these are objectively true. My own opinion is that the show manages to p ack enough in to maintain interest and because we are set up to expect the wrong solution to the mystery the correct solution isn't necessarily that obvious.

My absolutely favourite aspect is the seventies/eighties perfection of the Laura Ashley decor of Ruth's flat.