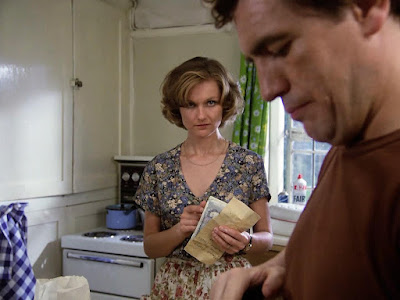 As you all know I like to read round what other people have to say about a show before I start rambling about it here, and my reading round the reviews on this one has been interesting. Basically every review is a)claustrophobia b)Peter Cushing c) Brian Cox and d) sadism. Which interests me because while nobody else is interpreting this episode in the way I always have, it does confirm that I have hit on the sadism element which everyone else has noticed, andwhat we would now call coercion and control.

I have thought long and carefully about whether to post this, mainly in case anyone would think that I was kinky, but I've decided I'm going to. Up until I saw the word 'sadism' in every review I thought it might be the result of watching too much porn, but I do think I#m onto something here. You see what nobody else is saying and which I have always thought, is that this show is incredibly sexual. Not sexy in any way that anyone without a specific, really weird fetish would chime with, but if you're one twisted fuck, this is exactly how you probably fantasise your sex life to be. And I do mean from both sides: there are people out there who like being dominated as much as there are dominatrixes and so on.

The reason I say this is easily answered by some other questions: what kind of weirdo has a whole set up built in the back of his pet shop to torture someone? What kind of weirdo keeps a private zoo of exotic animals? What kind of weirdo seeks out a specific prisoner to try this on? A kinky one. That is a level of obsession and devotion to a particular person which has to be a kind of twisted sexual thing. This is a Josef Fritzl level of wrong (the guy who kept his own daughter prisoner for twenty years and made her pregnant seven times. Fritzl and his wife brought up some of the daughter's babies as their own, so I don't think the fact the girlfriend is also imprisoned need make it any less sexual.

Are you heaving yet?

What do you mean, I'm not supposed to think of real life parallels to this show to accentuate that it could happen in reality?

Not only is there this solid undertone of a power dynamic which is just wrong in all sorts of ways, the show then accentuates it by making Cushing's character a former concentration camp guard, having built us and Spillers up to expect him to be a concentration camp survivor. This is one sick and twisted tale and I just know y'all love it.

The ending is particularly effective.

I've tried very hard to think of any criticism and I don't think I really have one. Just don't try to leave the room as you watch this. <Gulp>