Round the Twist: Know All 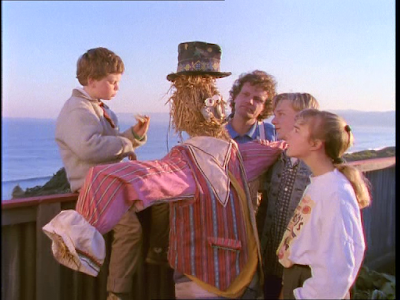 I think Round the Twist might be only the second Australian TV show I've featured here, but it's DEFinitely just the article for TV in a Time of Strife. I suspect the reason I haven't featured it yet is that I'm slightly embarrassed about my great fondness for such a batshit crazy children's TV show, which I did watch on its first UK broadcast, even though I was obviously older than it was intended for at the time.

I literally cannot praise this show highly enough, and it has all the hallmarks of quality television. The first thing it did which makes it real quality is the writers actually asked (after the first two series) the kids performing on it what they would like to see themselves. The result is not TV for children as adults think it should be, no matter how good that can be. The result is that we get TV actually featuring the weird unfiltered fantasies of kids and it is far more than you would expect from any other children's TV show about a family living in a lighthouse. I suspect mainly the suggestions for the show came from the boys rather than the girls, as will become apparent from the nature of some of the episodes. We have the one where Bronson swallows a 'whirling derfish' and as a reult develops a whirly willy. What boy hasn't dreamed of having a whirly willy? And Bronson of course finds that now he has a natural propeller his swimming is much improved. We have the one with the haunted dunny, where the ghost just wants to tell them where a portrait is hidden. We have the one where Pete has magic underwear that shrink and he spends basically the whole episode naked. The one with the spaghetti eating competition where the competition ends in vomited spaghetti all over the audience. The one where Bronson picks his nose after using superglue with predictable results. The one where Pete pees on a tree and gets pregnant as a result. It's like they got into the head of any random boy and just broadcast the contents unfiltered, but perhaps I'm revealing too much about my own inner world. To be fair my own inner world hasn't changed much in the intervening years anyway.

I have chosen this episode because it best demonstrates the quality of this show in that it can be understood on several different levels and never ever talks down to the kids. It's about a trunk of haunted circus costumes they find on the beach, and the effect these costumes have on the various members of the family. Does this or does this not sound like a classic ghost story? That's the other genius thing the show did, of combining the young person mentation with classic tropes of ghost stories and others. It can tend to put adults off because of the childish side, but it definitely has a deeper side to be appreciated.

It manages to distill the essence of multiple ghost and horror stories and films into one short TV programme. That's quite something. The first two series were based on short stories by Australian children's author Paul Jennings, and all I can say is this guy is a genius. Apparently the suitability of his stories for children has been questioned, and that in itself should tell you that children lap them up like nobody's business. If you read this Paul Jennings, you're obviously one twisted individual and your audience worldwide love you for it.

The first mysteriious element is of course the trunk being washed up on the beach outside the Twists' lighthouse. This in itself presses the scary buttons, because an old trunk like that must have got lost in a long-ago tragedy at sea. We just know that it's going to be mysterious, magical, or terrifying.

So of course the Twists have to put on the antique circus clothes they find in the trunk. Surely I don't need to say that the circus automatically spells freaks, weirdness and is the perfect twist (geddit?) on the already high level of weirdness. Of course they do actually turn out to have magical powers and give their abilities to the wearer. This is resolved without an actual disaster - this is of course a children's TV show.

The other thing which draws on horror films is the way the Twists' scarecrow comes to life. I was thinking that there was *a* film in which a scarecrow came to life and was dead scary. Naively, in retrospect, because I discovered when I checked that this is genuinely a regular horror trope and has been going at least since The Legend of Sleepy Hollow. The scarecrow is the only actually scary bit of this (and apparently comes to life because they dress him in some of the clothes out the trunk) - cleverly so, because he is of course the only 'character' who couldn't really do the scary things he does in real life.

The other scarecrow image I have in mind is a television one and is the way in The League of Gentleman an adulterer is punished by being set up in a field as a scarecrow. The two scary little girls keep talking to him until one day he manages to talk to them and ask them to rescue him. At which they tell them they know what he's done and cover his head back up again. That programme is really freaky.

Not to give too much away, the scarecrow's behaviour starts to give some problems...

So like you do the Twists resolve this by putting clothes on a mannequin and the clothes bring that to life as well so that the scarecrow has someone to love. And that's where I started sobbing.

We end it with the scarecrow and the mannequin in love and the Twists otherwise still in possession of the clothes from the trunk and thus of the various magical abilities they bring. Also with me sobbing.

If this is the kind of weirdness you need in your life, in a very ethical move, perhaps influenced by the series being publicly funded, all four series are officially available on YouTube.

But that's not the best thing I have to say. Oh no, that's coming. The original website for the show, in all its c. 2000 glory, is still up and if you want to see it you still can at www.roundthetwist.com

How good is that?

You will be delighted to know that all of the UK's problems are over and finally we have a candidate for leader who speaks sense and whose meowfesto is rock solid (the wonderful Don't Panic are behind this): 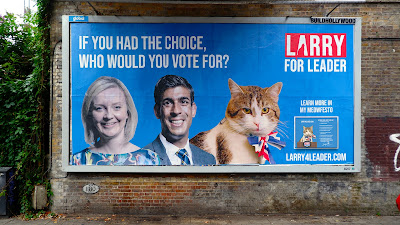 80s TV Round the Twist Television for a Time of Strife