The X-Files: Mulder and Scully Meet the Were-Monster 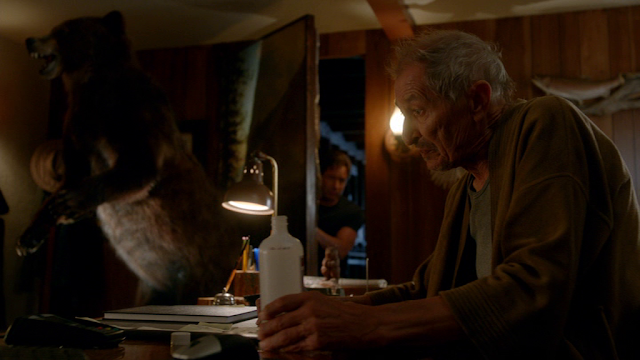 Surely the FBI is on the minds of the whole world this week? It's no use, us setting the collapse of our banana republic government to the chase music from Benny Hill doesn't compare, and obviously we're going to have to have a General Strike (click the link in the menu to join the resistance).

So what else was I going to move straight on to but a bit of X-Files. I've chosen this one for a rather idiosyncratic reason which is that I like the particular sequence set in the hotel, and in fact have found that I'm tending to find these Series 10 episodes rather difficult to get my head round. I have identified a couple of reasons for this: they have complex, layered plots, and tend to be very self-referential to the previous history of The X-Files. Which is fine, obviously. What makes it difficult is that this season frequently pokes fun at the growth of conspiracy theories and increase in people believing utter nonsense since the original show aired. Since 2020 this has seemed far more deadly and the consequences of people believing rubbish have become much clearer.

I was a bit daunted when I started reading round this episode to find that it has something like sixty reviews on IMDB, at least that is until I read them and found that despite having overall high ratings everywhere, the reviews are divided between people who extravagantly praise the self-reflexive fun poking of this episode and a solid phalanx of people who really don't like it. So either you will like or hate the way this episode contains mutliple references to previous episodes. I particularly like that there are tomb stones with the names of previous directors on them.

The episode also interestingly references Kolchak: Night Stalker, which was one of the main inspirations for the show in the first place. In fact this episode started off life as a script intended for that show. I have seen Kolchak in the past and liked it - the only reason you didn't read about it here is that I didn't feel like I had anything sensible to say about it that hadn't already been said. For me personally The X-Files feels like a much sassier take on the subject, and would certainly be my preference.

So I'm three paragraphs in and I've already talked about a bunch of stuff referenced by this episode and that of course is probably why people either love it or loath it. The two episodes before this one in the series were much more serious in tone, and did the usual X-Files things of referring to paranormal events as if they were true while also saying they didn't happen and having us see them happen on the screen in front of us. They featured aliens heavily rather than the - I suppose you would call it cryptozoology but I'm not sure that's the right word - subject matter of the lizard man. This will sound absolutely barmy but it makes sense in my head - the alien subject matter seems more serious and sensible than the lizard man subject matter of this one (even though I don't believe in aliens), which places this episode firmly in humorous territory while disconcertingly using some of the same techniques on the audience to create a sense of reality.

I haven't seen anyone else mention it, so this blog post's sole original contribution to the discussion may be my idea that the opening scene with the stoners references (lol) Scooby Doo - they talk like Shaggy, dude, and are stoned off their tits. Like Shaggy. And what show is so closely related to the X-Files as Scooby Doo?

What initially tickled me about this one was the sequence set in the hotel filled with too-big taxidermy, hiding peep holes for the pervy owner. There was a previous episode of The X-Files where a peeping tom used mirrors to spy on women in the bathroom, so it references that. Significantly, when Mulder discovers the hidden passage revealed by a fallen taxidermy head, he goes along and removes the eyes in another taxidermy head to spy on Scully asleep. So it references Mulder's previous reputation for being a bit of a perv. Well, everyone has to have a hobby, and I can respect him for that.

But of course you've got it that there's a secret passage and heads with removable eyes so you can see through, and more to the point, this episode is referencing pretty much every old dark house film in history. This is the bit which drew me in. I love a secret passage.

So we have a non-mythology X-Files episode, except that it is largely about the X-Files and references so much stuff that I haven't even touched on most of it. So you;re best just sitting back and enjoying it, because it's not intended to be taken too seriously. 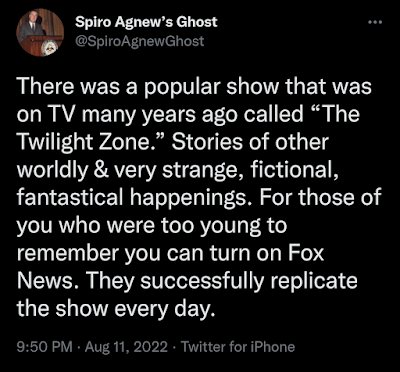 (Edited to remove flippant references to the GOP made before I learned about the man opening fire on the FBI office).
If you would like to support me and this blog you can buy me a coffee (or a box set) here.
2010s TV The X-Files