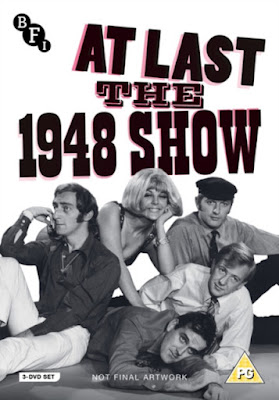 I have been looking around for what to do next since as you know I find that themed posts seem to suit me quite well and so the current theme is Television for a Time of Strife. Heaven knows we're in a time of strife and television was always intended to be entertaining so for a while from now I am solely going to focus on shows that we can watch as re-creation in a world which is crashing and burning.

In case the title of this post seems unusually detailed, indeed accurate, that's because I've copied it straight from the handy booklet that comes from the BFI box set of what remains on this show, and that's what the episode is actually called.

In fact you really ought to get the box set this instant and also really don't need me to explain it to you. In case you haven't heard of this show, despite its restoration and publication being trumpeted all over the classic TV internet, I'll list some names and you'll see why it needs no justification:

And in a slightly supporting role but a legend of a different sort:

Mother of God, what can you say once you've named those names? Literally all legends. This is one of those occasions when I would be very happy if you closed the browser now and went away and watched it, because your life would be better spent that way. At Last the 1948 show, with the slightly later Do Not Adjust Your Set, was the connection between the earlier humour of the Cambridge Footlights Revue, Monty Python, and subsequent comedians. I say subsequent comedians, because even if you haven't seen this show it's very familiar. Some of the actual sketches (notably the four Yorkshiremen) went on to be used by Monty Python and other comedians, which is why it seems very familiar.

But there's something different about it from subsequent shows which is what I like best about it. There is a certain lack of polish about At Last the 1948 Show which to my mind makes it even better. I like comedy which the performer finds funny, I like laughing with people, and in this show you feel as if you're in the live audience laughing with the cast.

Another thing I like in comparison to Monty Python (which I'm not knocking, I should say) is that this show does relatively longer sketches. Often in TV when you lengthen scenes or reduce changes in shot it merely slows the whole thing down, but that isn't the effect here at all, it allows the narrative to be developed further.

I love the sketch where John Cleese plays a railway inspector who has had to investigate 40,000 complaints against Marty Feldman a driver. It's the details of what has happened to Cleese's life as a result and the details of taking the London to Brighton cattle train to Manchester which make it perfect. The intervention of the Bishop of Manchester and what the driver was doing in the cathedral transept with the cows was also quite something.

But my favourite is of course the sketch where the policemen dress up in drag to be plain clothes police women to do a raid on a night club. I looove the way Graham Chapman isn't happy with his assigned female name and wants to change it to 'Burial'! And of course there is the difficulty of what to do if the punters get too fresh because of the coppers' female wiles. This sketch also encapsulates the less polished ethos of this show because they can't help themselves laughing. This is exactly the sort of thing I like. If you can say it without laughing, it's not funny.

My only criticism is I preferred the box design the didn't use (pictured).

If you want to watch this show and are short of cash there are older box sets available which have fewer episodes before the current status of all but two recovered was achieved. There are also some episodes and key sketches on youtube. I am offering no guarantee as to whether the episode titles on there bear any resemblance to any other release.

If you would like to support me and this blog you can buy me a coffee (or a box set) here.
60s TV At Last the 1948 Show Comedy Orphaned Episodes Television for a Time of Strife