The Saint: The World Beater 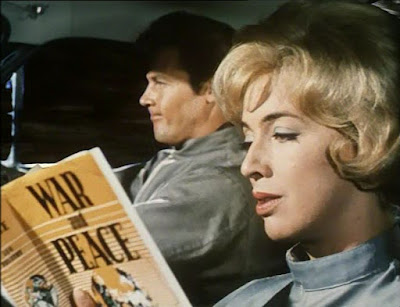 I started off watching this show thinking that it had been a long time since I had watched some ITC (I also have Randall and Hopkirk Deceased lined up to rewatch) before realising some time in that I have just finished a lengthy series of posts about probably the best known ITC series of all time. I wasn't sure about why I don't automatically think of The Prisoner as being an ITC series - although I think it doesn't have the things which I think are characteristic of ITC series. These would of course be the Avengersland setting, the cast of the exact same circle of actors who appear in all these shows, and a certain ITC colour palette. I'm not sure if it's Eastman, identical to the Eastman effect, or if I'm just being affected by rambling on about film. You can also usually rely on ITC to have some romance (I use that word to tone down what I actually mean) which was never on the agenda in The Prisoner. Anyway, I have only just noticed that I perceive a marked difference between The Prisoner and the rest of ITC shows which I had never noticed before.

I think the matter of worthiness and seriousness is also noteworthy. The Prisoner clearly had a very serious agenda, whereas (without wishing to imply that they are in any way inferior) the other ITC shows tend to be big on the entertainment and you'd be hard pressed to get major philosophical or political points out of them, beyond the way you can in any situation in life.

Take The World Beater, for example. It's a show basically full of boys' toys (and what boys' toys they are) about motor racing, with an element of a family feud, sabotage and a possible love interest for Templar. There are also the boys' toys represented by Kay Collingwood's gadgets.

The other thing that I tend to forget is that throughout his lengthy career Templar was a very ambivalent figure, veering from being a criminal to being a hero. In this one he is definitely on the side of being a hero for the owners of the cars because he sabotages the sabotage and wins the race. But even if you'd never seen it you knew that he was going to win the race didn't you. Here he also shows himself in Great Lover mode, and it is apparent that he and Kay have been cosy in the past because she goes straight into kissing him on their first meeting in the episode. Not to beat about the bush, their relationship as the episode progresses is incredibly sexual (at least for an ITC show) and you just know that as a couple they would be positively kinky with their power dynamic. Also the sheer amount of innuendo they fit in is quite something.

Beyond the element of sabotage this show draws on the always reliable race trope, which of course goes as far back in human history as Aesop. It even uses the traditional slapstick device of the car getting stuck and the passenger having to get out to push, getting muddy in the process. On reflection I think the defining factor of ITC shows that I have been groping for is that they tend to be rather cosy and reassuring. Even though their subjects nearly always include spying and other dangerous activities, as in this show they end in  a way which isn't disturbing. Nobody watches The Prisoner to be made comfortable or be distracted from their normal life.

I wonder whether one of the reasons ITC shows feel cosy is because of the recurring actors they use - there are just endless familiar faces in this show. This isn't criticising in this case - perhaps I'm mellowing in my old age. I don't really have a major criticism of this show.

This is an accomplished, straightforward show with a dependable racing plot with the twists as said above.