The Prisoner in the Asylum: The Girl Who Was Death Part 1 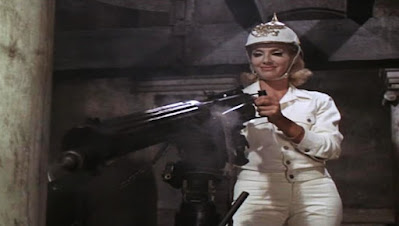 Warning: this post includes mention of traumatic experiences which some readers may find distressing.

There are a number of ways of taking The Girl Who Was Death (at least for the purposes of this blog post) and I will touch on all of them during this post so I'll have to begin by listing them in the hope that readers will have some map for where I'm going. They are that: (1) Number 6 is psychotic and hallucinating all this without the aid of psychedelics; (2) Number 6 is paranoid; (3) Number 6 is still stoned on LSD from Living in Harmony and this is a hallucination which may form part of LSD therapy; (4) this is a story (which may or may not tell the ongoing story of the dangers of the Village); (5) the episode may represent a therapy session where Number 6 talks about a number of traumas; (6) the episode may represent a number of symbols which give clues to the meaning of the show and are designed to prod the viewer's mind into thinking about the key themes of the show. Phew. Let's deal with them in order.

Although I have kept suggesting psychosis as a possible diagnosis for Smith/Number 6, I am also very aware that there is a lack of that sort of mental health problem in the show. It is a very old fashioned distinction now, but psychiatrists used to separate mental disorders into neurotic (which are exaggerated and disabling normal experiences, such as anxiety) and psychotic (which are not normal experiences, such as seeing things which aren't there or having some very strange beliefs which are not normal in your own culture). There is a special case for Borderline Personality Disorder, because it used to mystify psychiatrists: people would get psychotic experiences without the full blown syndrome of a psychotic illness. So the borderline it's positioned on is the borderline between neurosis and psychosis, because most people who have it are significantly bothered by the characteristic emotional instability as well, which you don't get in schizophrenia.

The problem with seeing things in The Prisoner as psychotic experiences is that a psychotic illness screws up your whole life, you don't just have voices and get on with your life. With untreated psychosis after a time you certainly wouldn't be in a position to function as well as Number 6 does, you wouldn't have the penetrating intelligence or his very strong personality.

While I think nobody can really deny that Number 6 does experience things which aren't happening in this show, I don't think it is therefore caused by psychosis, and I don't think the events of this episode are caused by psychosis. When he does experience things which aren't necessarily happening, well, frankly that can happen to anyone. Particularly under stress and if your mental health isn't that good, we can all think that things are happening which aren't, for example you might think people are talking about you. What separates this from a true psychosis would be that you are prepared to entertain the idea that these things aren't happening. If you have the personality set up of a personality disorder you are pre-programmed to interpret things wrongly and think everyone is out to get you.

Nonetheless I wouldn't go to the stake to defend this and I think you could very well interpret this episode as meaning that Number 6 is experiencing paranoid psychosis and this is his very scary internal world. The fact that it doesn't strike us as being actually completely possible wouldn't stop it in the world of paranoid psychosis.

The Girl Who Was Death follows on directly from Living in Harmony, where it is explicitly said the events were caused by hallucinogenic drugs, and it is possible this is too, just with the story book used as the setting rather than the Harmony set (I mean set as in a theatre set, not set as in (mind) set and setting as used in the 1960s vocabulary of LSD use). It is even possible that this is another session of LSD therapy. In that case the symbols and possible life experiences referenced will take on an extra significance.

Although it's presented as Number 6 telling the story of how he saved London from the mad scientist, we are, after all, talking about The Prisoner and it's doubtful it's as straightforward as a bedtime story! That said if you want it to be a story it incorporates Number 6's fantasy or cover story for his murder, that he is a secret agent.

(5) Talking about trauma in therapy

This is one of the explanations which I find most interesting from a psychiatric point of view. Specifically the bizarre scene where Sonia speaks lovingly to Number 6 while trying to kill him. To me this speaks of trauma, and the twisted way an abuser talks to his victim. I love you, but I'll still do this, and it's your fault, and it's so special you can't tell anyone or you'll get in trouble, type of thing. It is particularly telling that she speaks to him in probably the most sexual way anyone ever speaks to anyone else in the show here, and at the same time is trying to kill him!

Parents have tended to feel terribly blamed in psychiatry. I can't think why, since parenthood is one of nature's little tricks of humanity - you're on a date and suddenly find you're married with a  family, the bastards aren't going anywhere until they're eighteen and you have literally no idea what to do with them. I suppose you could interpret this scene as referring to the sort of inconsistent parenting which does cause people to have personality disorders. The fact that Sonia is talking to Number 6 in such a sexual way is part and parcel of utterly nad parenting, and incest of course will lead to pretty well guaranteed mental health problems.

The other crucial thing of course for mental health and our ability to function is our attachment style as developed in childhood. Number 6 has an avoidant attachment style and if we read this episode as representative of his childhood, I think we can see why!