The Prisoner in the Asylum: The General

The main problem with The General is that it makes absolutely no sense whatsoever on the face of it. A three year degree put indiscriminately into the minds of the entire Village population under the reluctant tutelage of a professor who has to be brought back from escaping?

Even in the heady days of education in 1968 that would have been wild!

What is going on is clearly not an education in the sense of a university degree because it doesn't feature the sort of intellectual experiences of finding things out, arguing, marshalling facts, getting incredibly drunk, and weighing up evidence which are the real point of a first degree. Rather, I would like to draw your attention to the actual nature of what is being taught, and I think the 'education' here is about society and how to live in society, with the key note being conformity.

So far so Prisoner, but I must also just point out the titles which are given to The General and The Professor - far from being the numbers normally given in the Village, they are functions. As I have stated before I don't think The Prisoner was intended to have one single interpretation beyond the themes of concern about authoritarianism, control, internationalism and secrecy. Again as previously stated I do think that psychiatry is one of the subjects which dovetail very nicely with these themes and I think that Speedlearn and the way roles rather than numbers are given for the professor and the general suggest a possible reference to a particular sociological school, namely structural functionalism. It is about how the larger structures in society work and with an accent on duty and responsibility for the individual, and significantly for this series of posts, structural functionalism has been very influential in health care. In true Village fashion of course these structures also require conformity. It is also interesting how frequently the language of psychiatry is used in some of the primary sources on structural functionalism; in fact, it is almost as if The Prisoner were written with one eye to an essay on (significantly) Psychoanalysis and the Social Structure written by the structural functionalist sociologist:

From the psychological point of view, institutionalized roles seem to have two primary functions. The first is the structuring of the reality situation for the action of the individual. They define the expectations of behavior which are generalized in the attitude patterns of other individuals with whom he may come into contact. They tell him what the probable consequences of various alternative forms of action are likely to be. Second, they structure the "superego content" for the individual. It is fundamentally the patterns institutionalized in role structure which constitute the moral standards which are introjected in the process of socialization and become an important part of the personality structure of the individual himself, whether he conforms to them or not. It may be stated as a fundamental theorem of social science that one measure of the integration of a social system is the coincidence of the patterns which are introjected in the average superego of those occupying the relevant social statuses with the functional needs of the social system which has that particular structure. Talcott Parsons: Psychoanalysis and the Social Structure, in Essays in Sociological Theory. The Free Press, New York, 1954, p. 520.

Parsons is about as easy to understand as Laing is, but that short passage is so reminiscent of The Village's activities and makes clear the connection between his school of sociology and psychiatry. Given the use of role titles rather than numbers or names, I would suggest that what is going on in this episode is not the sort of education which makes people think but the sort of education which makes people conform, which is why they all repeat the same lessons parrot fashion. This needn't be a contradiction of my asylum theory - a lot of the criticism of psychiatry is that it forces conformity on people who are in some way 'different' from the rest of society, and if that isn't embodied in this episode I don't know what is. Here, being well and getting discharged, is contingent on being shaped into your role in society and thinking the right things. The Village's approach to medicine is exactly that of Parsons because he saw medicine as having a role in controlling deviance and that is why the psychiatry reading fits well into the concerns of The Prisoner:

[...] Parsons [makes] the important point that medicine is a major institution for controlling deviance in modern societies. It is not just a benign institution based on scientific care, but acts to check the deviant tendencies of individuals, who otherwise might try to escape their social roles. Parsons argues that the strains of modern life may be so great as to drive people into the sick role to escape their normal responsibilities, and this tendency needs to be checked. So while he has a more favourable perspective on medicine than the Marxist, he still sees it as performing a social function that is beyond its claim to be the purely scientifis treatment of disease. Parsons' analysis shows how the medical profession acts to control motivated deviance and provides an account of illness as a response to social strain. Kevin White: An Introduction to the Sociology of Health and Illness. Sage Publications, London, 2002, p. 8. 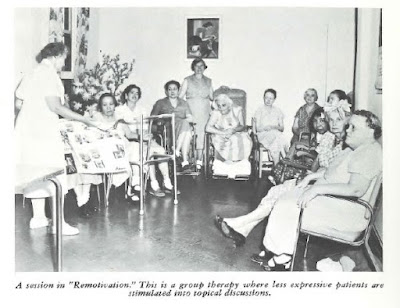 And this isn't as unrelated to therapy as it may seem. Nowadays we tend to think of 'therapy' as much more directly aimed at a distressing experience or a particular problem, such as anxiety, and usually means strategies to deal with it. However therapy isn't always that far distanced from education because it means learning and developing. Additionally we much not forget that as recently as the sixties psychiatry looked very different and many therapies were in use which would look distinctly odd to us today. For example I would draw your attention to the picture of 'remotivation therapy' from my collection of pictures from Arizona State Hospital: That's right, the old hospitals institutionalised you to the point where you were toallly unmotivated and then had to do remotivation therapy on you! On the subject of oddness, if a bunch of otherwise intelligent people ringing each other up and repeating random facts parrot fashion isn't  odd, I don't know what is.

A final, indirect relevance of Parsons to the psychiatric approach to The Prisoner is in his writings (all health professionals' hearts will sink at this point) about the rights and obligations of the sick person and the society he lives in. He formulated a specific sociology of the 'sick role'. Society only gives you a break from your obligations as long as you are actually unwell (such as being admitted to hospital for an operation) and you have to do all you can to get better, such as attending appointments and taking medication. If you don't you're a malingerer. It should be stressed that because of his sociological approach his approach really doesn't work very well for chronic disabling conditions such as the longer-term and more disabling mental health conditions such as schizophrenia. 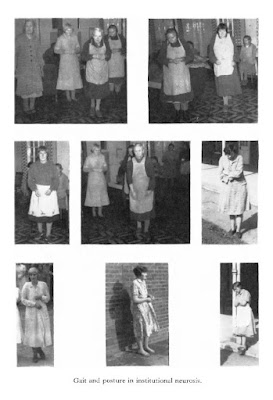 While writing this series of posts I have had nagging at the back of my mind that it would be negligent of me to omit to mention the phenomenon of institutional neurosis, since it was very topical at the time the series was made. I couldn't find an immediate suggestion of it, but this is a suitable place to mention it because it is related to motivation, the longer-term effects of living in an institution and the way these effects comromise your ability to live outside the institution. The psychiatrist Russell Barton elevated the effect of institutional living to a mental disorder in its own right and brilliantly saw it applying to the staff as well as the patients:

Institutional neurosis is a disease characterized by apathy, lack of initiative, loss of interest more marked in things and events not immediately personal or present, submissiveness, and sometimes no expression of feelings of resentment at harsh or unfair orders. There is also a lack of interest in the future and an apparent inability to make practical plans for it, a deterioration in personal habits, toilet, and standards generally, a loss of individuality, and a resigned acceptance that things will go on as they are - unchangingly, inevitably, and indefinitely.

These signs vary in severity from the mute stuporose patient who sits in the same chair day after day, through the ward worker who has without protest surrendered the rest of her existence to the institution, to the active cheerful patient who enjoys the facilities available, often does some handicraft during the day, but shows no desire to leave the hospital, shows no interest in plans for a future outside gospital, and raises numerous difficulties and objections when anyone tries to help her to be discharged. Russell Barton: Institutional Neurosis (Second Edition). John Wright and Sons Ltd, Bristol, 1966, p. 14.

So really, this episode is about society, structural functional theory and conforming as a way to make society function. These are issues which are of more relevance to psychiatry that may appear at first glance, and I would argue that the connection between psychiatry and society is being used here with a bit of social engineering.