The Prisoner in the Asylum: The 'Where am I' Dialogue

We are about to encounter the 'Where am I?...In the village' dialogue for the first time and I think it is so important to the theme of the series, and its importance indicated by being repeated, that it deserves a post on its own.

I would suggest that this dialogue is a conversation of the sort familiar to anyone who has worked in mental health at any level, where a service user doesn't consider they need the service they are reluctantly receiving and disputes the need for this service on their own terms with the professionals. Consider as another example, this extract from a longer conversation in the Titicut Follies documentary, which again has the same characteristics of two people at different tangents and is a real conversation in a real psychiatric hospital:

The ability or otherwise to see things the psychiatrist's way is such an important aspect of mental health that it is usually part of assessment and is given the jargon term insight:

'The clinical assessment of a patient's capacity to understand the nature, significance, and severity of his or her own illness has been called  insight. There is current interest in describing its characteristics and establishing how it correlates with other measures of illness. The attitude of patients towards their illness has clear clinical implications, and the assessment of insight tried to investigate the patient's awareness concerning the impact their illness has, and their capacity to adapt to the changes brought about by illness. The patient's awareness of illness and the extent to which it is interfering with function affects compliance for prescribed treatment. David has proposed that insight implies the ability to relabel unusual mental events as pathological, the recognition that one has mental illness, and compliance with treatment. Some parallels have been drawn between the loss of insight in psychiatric patients and the denial of disease or loss of function that occurs in certain neurological conditions.' Andrew Sims: 'Descriptive Phenomenology' in Michael Gelder et al: New Oxford Textbook of Psychiatry (Second Edition). Oxford University Press, Oxford, 2009, p. 56

Now, you may object at this point that Smith isn't talking about not needing to be in The Village or about being mentally ill, both he and Number 2 are talking about information. And I would venture to suggest that this is because the conversation is as seen through Smith's eyes and he isn't very well at all. It can't be overstated that if you assume he is mentally ill and seeing things through his own paranoid interpretive lens, everything in the series begins to look much different. It is possible that he simply isn't hearing what Number 2 is saying at all - this conversation is exactly like a psychiatrist saying to someone unwilling to hear it that he is very mentally ill, and the natural reaction of the patient. If someone tells you something you just don't accept you naturally understand it through your own interpretive filter. Here, I would suggest that Number 2 is telling Smith that he is mentally ill and in hospital for treatment, but what we are hearing is Smith's rationalising of this conversation which doesn't make sense, using his own defence that he is there to have information extracted from him. This is also why, to be frank, the dialogue doesn't exactly run like a sensible conversation - what I mean is that is somebody asks you who Number 1 is, you don't answer by saying that the questioner is Number 6. In a conversation in polite society you either tell them who Number 1 is or explain why you can't tell them. In other words, what we are hearing isn't real.

Unfortunately the only opportunities we get to hear Number 2's side of these conversations are the notes he records where he talks about Smith's resistence and inability to settle in.

I mentioned previously that I think The Prisoner references a famous psychiatrist of the time, namely RD Laing, and I think it specifically references his best selling work of 1960, The Divided Self, in which he examines how people become unwell and posits a different understanding from the medical one of the meaning of psychosis. Laing's work, and particularly The Divided Self, was hugely popular in the sixties, and I think is clearly referenced in The Prisoner by its reference to people being divided or duplicated and the use of the word schizoid, which is a jargon word frequently used by Laing. He doesn't use it in the common slang way of meaning a person who is actually divided in himself, which is more how it is used in the show.  Of relevance to this dialogue is perhaps the most famous passage of the book where Laing reexamines a dialogue with a patient published by Kraepelin, the psychiatrist who defined schizophrenia, in 1905:

'"The patient I will show you today has almost to be carried into the rooms as he walks in a straddling fashion on the outside of his feet. On coming in, he throws off his slippers, sings a hymn loudly, and then cries twice (in English), 'My father, my real father!' [...] When asked where he is, he says, 'You want to know that too? I tell you who is being measured and is measured and shall be measured. I know all that, and could tell you but I do not want to.' When asked his name, he screams, 'What is your name? What does he shut? He shuts his eyes. What does he hear? He does not understand; he understands not. How? Who? Where? When? What does he mean? When I tell him to look he does not look properly. You there, just look! WHat is it? What is the matter? Attend: he attends not. I say, what is it then? Why do you give me no answer? Are you getting impudent again? How can you be so impudent? I'm coming! I'll show you! You don't whore for me. You mustn't be smart either; you're an impudent, lousy fellow, such an impudent, lousy fellow I've never met with. Is he beginning again? You understand nothing at all, nothing at all; nothing at all does he understand. If you follow now, he won't follow, will not follow. Are you getting still more impudent? Are you getting impudent still more? How they attend, they do attend,' and so on. At the end, he scolds in quite inarticulate sounds."

'Kraepelin notes here among other things the patient's 'inaccessibility':

'"Although he undoubtedly understood all the questions, he has not given us a single piece of useful information. His talk was...only a series of disconnected sentences having no relation whatever to the general situation.' Quoted in RD Laing: The Divided Self, 1960. Pelican Books, London, 1970,  pp. 29 - 30.

I would like to suggest that in addition to being inspired by every conversation ever between a mental health professional and a service user who lacks insight, the Where am I dialogue is likely inspired by this actual exchange in Kraepelin and the most likely source of this for McGoohan would be RD Laing's book which is my own source for it. The passage even includes a reference to information!

I have treated the dialogue as a straightforward clash between one person who is mentally ill and another who isn't, and in fact that is seen by Laing as a valid way to see the discrepancy between the two views:

'Each has his own autonomous sense of identity and his own definition of who and what he is. You are expected to be able to recognize me. That is, I am accustomed to expect that the person you take me to be, and the identity that I reckon myself to have, will coincide by and large: let us say simply 'by and large', since there is obviously room for considerable discrepancies.

'However, if there are discrepancies of a sufficiently radical kind remaining after attempts to align them have failed, there is no alternative but that one of us must be insane.

'I suggest, therefore, that sanity or psychosis is tested by the degree of conjunction or disjunction between two persons where the one is sane by common consent.

'The critical test of whether or not a patient is psychotic is a lack of congruity, an incongruity, a clash, between him and me.

'The "psychotic" is the name we have for the other person in a disjunctive relationship of a particular kind.' (RD Laing, op. cit, p. 36)

For Laing this disjunction is better understood by reinterpreting the patient's psychosis as a function of his existence. For Laing psychosis essentially always makes sense. I think it is entirely valid to interpret the Where am I dialogue as not making sense and being a straightforward clash between a psychiatrist and his patient. Not going to lie, I don't like Laing's psychiatry but I think his real vocation as an interior designer was missed! It's not my fault if he didn't have the insight to understand that! 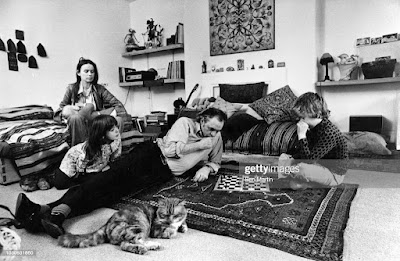 I think that the Where am I dialogue indicates that the show is about mental health because it is the archetypal conversation between a mental health professional and a patient, and I think it was very likely inspired by Laing's book and specifically the interview he quotes from Kraepelin.