The Prisoner in the Asylum: Arrival Part 2

In my last post about Arrival I considered the nature of The Village as a total institution and as a psychiatric hospital. In this post I will turn to our 'Prisoner'/patient, Peter Smith, and the processes which make him part of the total institution.

Nobody, surely nobody, talks about hospital without mentioning being 'admitted' to hospital, and Goffman once again has a reason for why people are admitted to a total institution rather than just moving in like you would into a flat:

'The inmate, then, finds certain roles are lost to him by virtue of the barrier that separates him from the outside world. The process of entrance typically brings other kinds of loss and mortification as well. We very generally find staff employing what are called admission procedures, such as taking a life history, photographing, weighing, fingerprinting, assigning numbers, searching, listing personal possessions for storage, undressing, bathing, disinfecting, haircutting, issuing institutional clothing, instructing as to rules, and assigning to quarters. Admission procedures might better be called "trimming" or "programming" because in thus being squared away the new arrival allows himself to be shaped and coded into an object that can be fed into the administrative machinery of the establishment, to be worked on smoothly by routine operations. Many of these procedures depend upon attributes such as weight or fingerprints that the individual possesses merely because he is a member of the largest and most abstract of social categories, that of human being. Action taken on the basis of such attributes necessarily ignores most of his previous bases of self-identification.'  Erving Goffman: Asylums. Garden City: Anchor Books, 1961, p. 16.

By these processes the outsider becomes an inmate of the institution, they are literally changed. Goffman draws a fascinating parallel with the monk in the Rule of St Benedict being given a habit and a new name as he begins his monastic life. In fact the admission process is so important to the institution that Arizona State Hospital presented a whole drama about it to the public on an open day: 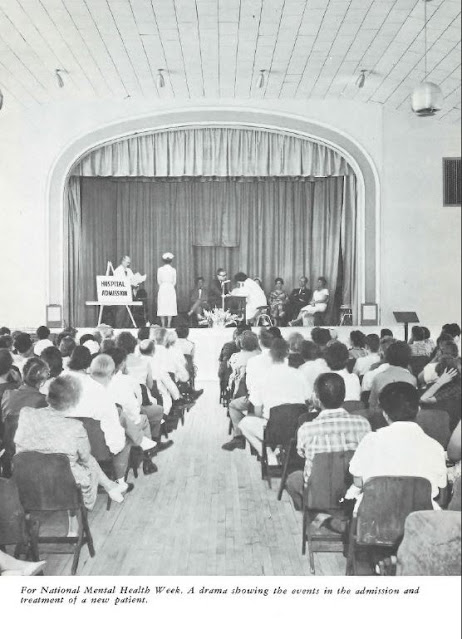 We see these processes perfectly in Arrival. When Smith awakes he has already been assigned to his quarters at Number 6. He is, of course, also assigned the same number himself. (I would suggest that the reason the staff of the hospital have numbers as well is to grant them a degree of anonymity, protect them from the dangers presented by some of their more dangerous residents, and to give the appearance of them being on the same footing as the patients; I think the hospital has been forced to use some sort of code names for its patients because of their frequent notoriety and has chosen numbers instead.) He is told various rules of The Village at various points. He is shown around the hospital. The aptitude test and questionnaire at the labour exchange represents many of the measurements Goffman mentions. He has a medical in the hospital and is given new clothes. Incidentally, we all know that the date of birth given by the prisoner/patient is the same as McGoohan's own, and I would suggest that is psychiatrically significant in terms of the then fashionable jargon of the divided self, of which more in future posts.

As Goffman states, the purpose of all of this is to manoeuvre Smith to engage in seeing himself in a different way - or rather, attempt to do so.

Number 2, in the role of admitting doctor, explains why Smith is in hospital - using the defence, that he has resigned, that Smith has built up in his own head because of what he has done to Seltzman - Smith is a very vulnerable and yet dangerous man and so there is no point unnecessarily antagonizing him on first meeting. He then ups the stakes somewhat by showing Smith that he cannot just do what he wants in The Village, because he cannot just walk out of Number 2's room; he also acquaints Smith with the comprehensive records that have been kept on him. It is a measure of how unwell Smith is that he seems surprised by this - in reality of course he has been known to justice and psychiatric services for years, but even in his own delusional world view, if you think you are a secret agent you expect there to be full investigation of your background.

The record keeping on Smith which is introduced in this the first episode, strikes me as one of the clearest indications that The Village is a hospital. In fact the 'medical' nature of the various Number 2s' notes about Smith has always struck me. I think the clearest illustration of this likeness is an actual patient record from 1975 found in the abandoned Essex County Hospital in New York. I think you will agree that the likeness with the records made by the Number 2s is absolutely striking (Source): 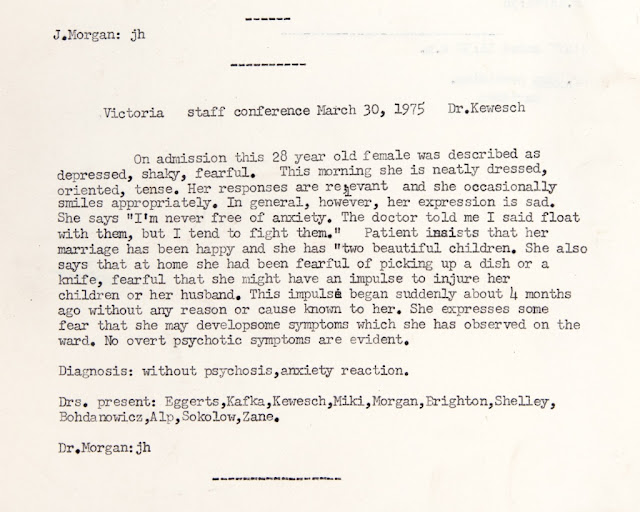 (The fact it took the presence of no fewer than eleven doctors to diagnose anxiety, the most common mental health condition which really can be diagnosed in primary care, also indicates the leisure and misuse of resources in the old hospitals).

I would just like to mention the possible diagnoses I have suggested for Smith because they will help to illuminate much of what happens in the succeeding episodes of the show. The first I suggested is Antisocial (also called Dissocial) Personality Disorder:

Personality disorder characterized by disregard for social obligations, and callous unconcern for the feelings of others. There is gross disparity between behaviour and the prevailing social norms. Behaviour is not readily modifiable by adverse experience, including punishment. There is a low tolerance to frustration and a low threshold for discharge of aggression, including violence; there is a tendency to blame others, or to offer plausible rationalizations for the behaviour bringing the patient into conflict with society. Source

The other possible diagnosis I suggested was Paranoid Psychosis (which is a bit of a grassroots term among mental health professionals so here is a definition of delusional disorder which is the best fit in the World Health Organisation's ICD 10):

Delusional disorder, previously called paranoid disorder, is a type of serious mental illness called a psychotic disorder. People who have it can’t tell what’s real from what is imagined.

Delusions are the main symptom of delusional disorder. They’re unshakable beliefs in something that isn’t true or based on reality. But that doesn’t mean they’re completely unrealistic. Delusional disorder involves delusions that aren’t bizarre, having to do with situations that could happen in real life, like being followed, poisoned, deceived, conspired against, or loved from a distance. These delusions usually involve mistaken perceptions or experiences. But in reality, the situations are either not true at all or highly exaggerated.

A bizarre delusion, by contrast, is something that could never happen in real life, such as being cloned by aliens or having your thoughts broadcast on TV. A person who has such thoughts might be considered delusional with bizarre-type delusions.

People with delusional disorder often can continue to socialize and function normally, apart from the subject of their delusion, and generally do not behave in an obviously odd or bizarre manner. This is unlike people with other psychotic disorders, who also might have delusions as a symptom of their disorder. But in some cases, people with delusional disorder might become so preoccupied with their delusions that their lives are disrupted. Source

Given that the word shizoid is used in an episode title it may seem natural to use Schizoid Personality Disorder but a glance at the link will show that that mental health condition doesn't fit Smith at all. I think the word schizoid is used later in the series in its common sense of a divided person and I think it references a well known work by a psychiatrist of the time.

I think a personality disorder diagnosis could go a long way towards explaining why Smith is continually at loggerheads with the world, is considered antisocial by others, and has done something violent to a man called Seltzman. A psychotic diagnosis would go a long way to explaining why he thinks the world is against him, although it isn't really. Usually in the show this is read as meaning that the system is set up against the individual, but to read the show in mental health terms this is reversed: I propose that Smith thinks everything is against him but this isn't real (this is the definition of psychosis or delusion) - he is really in a hospital which basically wants him to get better and get on with other people. My reading of The Prisoner as being about a patient essentially turns the whole point of The Prisoner on its head: he's not a free man, and what stops him being free is inside his own head.

I don't think I can over-estimate that the events of the rest of the series must be seen through the filter of assuming that Smith has one or both of these mental health conditions. Now that he has been admitted he can start therapy.