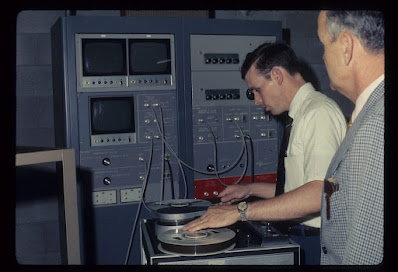 The introduction to this series of posts can be found here.
I see I began these posts on January 16th, and had no idea they would occupy me for the next four months. 42 blog posts about 58 TV shows later we have come to the end for now.

Now that I have reached the end of this unexpectedly long series of posts I am in a position to document some of the reflections these posts have occasioned in me. These reflections were intended to be attached to the last post but have become rather unwieldy. I have tried to make them as snappy as possible.

The first is about wiping shows, which is the main reason is that these shows were split up. I find it absolutely bizarre that early TV (in fact up to the seventies) was influenced by the culture of the theatre so that each show was a one-off and never to be repeated. There are complete runs of fifties radio shows extant and while most film before the forties has been lost, that was because of the instability of the medium, not deliberate.

Secondly, these posts have made me be sceptical about the financial reason given for wiping shows, that the tape was just so expensive that it had to be reused. Despite my scepticism, according to the Wikipedia page linked below in the early days of colour TV one Quadruplex tape cost the equivalent of £1,000 in current values. Ouch.

In fact even on the Wikipedia page about lost TV shows other reasons than financial are given for wiping videotapes. The most telling is that videotape was not thought to be a permanent archival medium at first. Others include: junking monochrome shows because it was thought they wouldn't be watched after colour came in; the old tapes couldn't be used for colour; not all shows were deemed suitable for overseas sales (can you hear me banging my head against the wall as I say that those that were deemed suitable were preserved by being recorded on film rather than the expensive videotape?); what archives there were filled up quickly, and finally the BBC had no archiving policy until 1978.

That's ridiculous and reinforces what I said above: if you have no policy about archiving what you produce, that indicates archiving is of no importance to you so what caused junking was culture and attitude, which in a context of an expensive medium created the perfect environment for several decades of TV output to go down the drain.

So with a pervasive culture that TV should not be archived and no policy in place to decide what was archived we come to the painful bit and this is about keeping (I'm counting this as my fourth point) shows. Having seen more of the material recorded at home and since uploaded to YouTube I have found I am more sympathetic to the idea of wiping shows after one viewing and clearly since the eighties a lot of material has survived which would have been better being lost.

I think this explains why my jaunt through orphaned TV episodes became an emotional rollercoaster. I found myself veering from being so upset that a whole series which sounded great was wiped, to wondering what on earth anyone was thinking keeping some of the things they have.

While preparing this post I came across an article about Why so little remains of the early internet which interested me because of the contrast with the attitude to the preservation of the completely new medium of the internet. To cut to the chase, nobody thought to preserve it until the Internet Archive came along. It's an interesting parallel because there is the same perception of the medium as disposable.

The fifth thing which struck me repeatedly in my journey into the world of partially-unavailable TV is the lack of competent record-keeping, remarkable for a medium which is only a century old. Over and over again on the missing episodes boards I found Kaleidoscope and others had different accounts of what was wiped and what was kept. Record keeping would have taken the thrill out of the chance discovery of Dr Who episodes but would make life much easier. That this is not a result of a contemporary lack of record keeping culture is shown by a comparison with army records: historians have comprehensive records of army manoeuvres throughout the television time period which allow a clear picture. That could have been done for TV and again I think it was the attitude to TV and I don't think the medium was seen as important.

If this was a PowerPoint presentation you'd all be asleep or gagging for a fag (you may be anyway) but my sixth reflection is that I have often wondered whether the rather eccentric TV I like was ever representative of broadcasting and this run through orphaned episodes has reinforced to me that my taste in TV probably wasn't representative. I think my taste in TV is literally cult and not representative at all.

To be frank watching these shows has reinforced my opinion that only streaming media is a mistake and you are always better downloading stuff. In fact this is the advice given on the missing episodes boards. The fact a show is online is no guarantee it will remain there or what will happen to any copies, and the more copies there are of rare shows, the better the chance of survival.

I have really enjoyed doing this and making the acquaintance of some shows I hadn't heard of. I was going to list what I particularly enjoyed but I really liked all of them so it was difficult to pick out favourites. Some highlights of shows that I would love to see but are confirmed missing are the 1950s dramatisation of the Albert Campion mysteries by Margery Allingham, An Enemy of the State (1965), It's Murder but is it Art? (1972), and Rat Catchers (1967 - there are some audio recordings of this show on YouTube). Personally I doubt that much will now be found in 'official' locations. I can highly recommend this site for information about little known shows of the past.

I am sure that more orphaned episodes will appear here in the future but for now this has been an interesting but distressing and exhausting, journey into TV history.