Orphaned Episodes: The Man with the Power (The Mind Beyond) 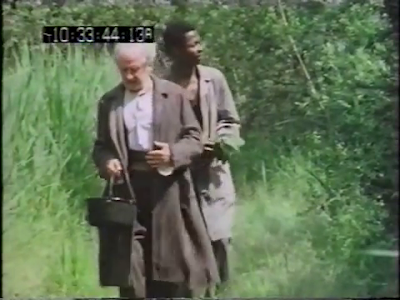 I think I have reached the end of these posts for now, so this will be the last post in the orphaned episodes series, just except for a post dealing with some odd shows that I won't do full posts about, and some reflections.

This is the second episode of this show i have posted about, and the whole series must have been fascinating if these two odd episodes are anything to go by. As is so often the case with these shows there is another with the same name, but this post is about this one not this one, which really does sound odd.

This is about an ordinary man who quite suddenly finds himself with supernatural powers, and the full implications of this for his life. After he feels an accident his colleague has, in the manner of the time the hospital his colleague goes to sends round a parapsychologist, wonderfully played by Geoffrey Bayldon. Boysie, the guy with the gifts, ultimately sends him away and starts behaving oddly. Not working or doing anything, just generally being out of character.

He doesn't even feel like sex with his girlfriend. With the best will in the world she's something of a harridan and frankly you can see why. He says he can't have sex with her any more, and gives a rather lengthy spiritual explanation for why.

I'm not going to beat about the bush, there is vanishingly little about this show online, and most of what there is isn't exactly positive. I can see the point that the acting is overdone, although I wouldn't go so far as to describe it as scenery chewing, which is one description applied to it!

I think the events of the play are intended to come across as incredible, and it's a bit difficult to go straight from that starting to sounding like Mulder saying 'Another classic demon fetal harvest'. It is deliberately intended that strange spiritual gifts are contrasted with the normal workaday world.

Boysie wanders off and meets another empath. Together they bear a passing resemblance to Tom o' Bedlam and I do think this show draws on the archetype of the wandering fool who is wise. It's therefore in an ancient tradition.

The problem of course is that when you have powers you're also scary. I love the bit where he tells the woman about the empty room in her house which she doesn't let and describes it to her!

Of course it isn't ultimately easy for him having these gifts and he ends up wrestling with the devil. I find this rather an unsatisfying resolution as the gifts appear for no reason as does the devil. He has a lucky escape though, when it turns out the girlfriend has had his baby but is marrying someone else. The show ends with him meeting the colleague who had the accident again. He had previously been sceptical about Boysie's gifts but unaccountably wishes him good luck.

A rather dissatisfying end, but nonetheless an atmospheric and sensitive drama.

If you can vote in the UK don't forget the locals on Thursday.