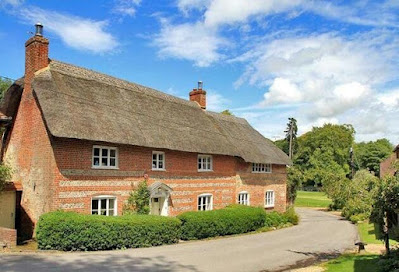 Nether Wallop is a village in Hampshire, which in the 2011 census had a population of 876 (surely everybody reading this recognises that cottage in the village), and it was here that in 1984 the First Nether Wallop International Arts Festival was held. And it is at this point I become hysterical.

I'm not going to say stop reading this and go and watch the show because together we have to appreciate how the festival happened first.

The festival was intended to be an answer to the Edinburgh Festival and was completely for charity. What made it unique (and produced some unique television) was that they asked celebrities to take part in the festival. And do you know, they did? And performed for free for charity in a tiny village where it wasn't even advertised and even for the tiny audience they didn't have a big enough hall (it was filmed in the scout but) and the acts had to be screened in the pub as well. The result is unique performances in a setting where professionals perform with amateurs and luckily Channel 4 were there to record it as a documentary.

The Women's Royal Voluntary Lesbians Against Hitler were the group of raving lesbians supposedly being collected for and played by Peter Cook and Mel Smith.

Bamber Gascoigne hosted a quiz where the locals beat some of the greatest minds of the age.

We get a glimpse of the Sunday service in the village church and the vicar greeting the congregation afterwards.

Stephen Fry and Hugh Laurie (fresh from his triumphant Bottom) did a Shakespeare master class. ('That's on page 33 of your New Penguins').

Bill Whyman somehow manages to do a skit with Stanley Unwin.

Sadly neither Real Madrid nor Liverpool could get a side together for the football match.

This programme is in several places online and is another show which, like Detectives on the Edge of a Nervous Breakdown, is perfect viewing to a time of strife. But I will leave the last word to Stanley Unwin:

Edit: That was going to be the last word but something wonderful happened today. I have been quite negative recently and this is from the BBC Twitter to show how TV has the power to make people feel more optimistic. This is magnificent. Apart from anything else I would want to share this with you for the looks on the government's (around Boris Johnson) faces!