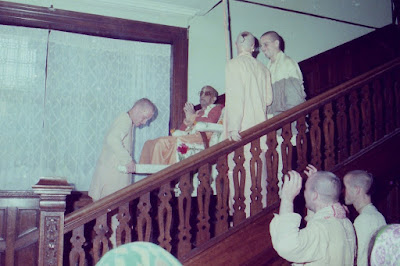 I was pleased to come across a religious documentary because most of the remaining orphaned episodes I have are plays and I felt like a change. I know for a fact that Credo was a series because this show actually says at the beginning that it is one of a series on cults (although Credo sounds more like a general religious TV programme) but it has left remarkably little trace of itself: I have been unable to find any reference to it on the internet apart from this one show on the actual Hare Krishna YouTube channel, not even on IMDb. This is probably the most orphaned episode I will cover. It's also recent enough (1980s) to have benefited from preservation via VHS.

I came across this because I was reading a book about what happened in the Hare Krishna movement after the guru died (TL:DR the difficulties of predominantly young adherents and adaptations made to the tradition by Prabhupada created huge conflicts and some people went completely off the rails right up to committing murder as well as the usual sex scandals). This was brought home to me with a bang when the Watford temple leader was interviewed and I'm afraid I immediately thought he was too young. I could tear my own eyes out. In fact I don't think any of the devotees in the show were much older than 30. The main impression you get is how these young adults were giving themselves to a sparse religious life.

I'm also going to have to be very frank about a rather strange impression but about this time I was at school and reading any outlandish religious literature I could lay my hands on. My reading introduced me to the contemporary literature on 'cults' and none of it is as favourable as this show. Most of the literature was driven by fear of Jonestown style deaths, Moonie weddings and the idea of deprogramming. In comparison this show feels like a bit of a public relations exercise! Incidentally my discovering Calvinism was a turning point in the life of my RE teacher at my Catholic school and just to help they were forced to make me head boy because I was one of only two boys in the sixth form and the other was never there.

Strangely this incredibly positive report came after very negative reporting about Hare Krishnas in the sixties and seventies. When Prabhupada landed in the states his ancient tradition met the counter culture and that was never going to be that respectable. I'm completely at a loss as to how this is so positive in the light of the academic approaches of the time and previous reporting.

Much of the show revolves around one devotee, Tim Webster. I have tried and failed to find anything about him and his career since, but if he's still a Hare Krishna they use the names they receive on initiation and they don't use that in the show. He comes across as a very serious man who has always had an interest in religion, and I do wonder whether he was chosen as the example of a respectable devotee. The show even shows his parents in their respectable working class life at home. Webster is a far cry from some of the earlier devotees drawn from the 1960s counter culture.

I think my summary of this show would be that it's a very good sensitive depiction of a new religious movement. But as a piece of journalism it's frankly rather rubbish because it's a broadcast on behalf of the International Society of Krishna Consciousness. If you spend five minutes searching now it is apparent that the movement has been racked by controversy, dissension and repeat scandal over its history. It's split into two or three groups, and there are several websites giving varied accounts of what goes on behind the scenes. Even before the internet, given the contemporary approach to what were then called cults you would expect some critical questioning to happen.

So interesting, but with a major fault in its journalism. Without the other programmes in the series it's impossible to know if they all took the same approach.