Orphaned Episodes: Stronger than the Sun (Play for Today) 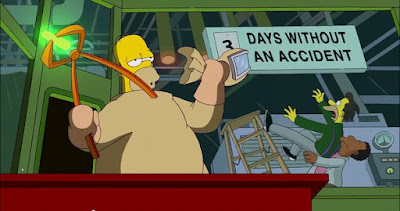 Play for Today was another long-running anthology series which broadcast from 1970 to 1984. Although some of its plays have been released in various formats, it has not been released in its entirety and since I don't think this one has been released commercially it meets the criteria for an orphaned episode I cunningly set originally.

I have just discovered to my shock that I have been blogging here for eight and a half years and don't think I have so much as mentioned that nuclear disasters are one of my little obsessions. How have I managed not to mention this? I'm particularly obsessed with the disastrous 'cleanup' at Enewatak Atoll and there was a time when I was younger when I could give you a blow by blow account of the events of 26th April 1986 in the number 4 reactor at Chernobyl and had to be prevented from calling our cat Windscale. I have no idea why this has always fascinated me, I'm not even anti nuclear power!

Anyway in this show I have finally found a TV show which is largely about nuclear power. It's also one that is quite widely discussed online so I don't have to do much in the way of description and can go straight into opining. I particularly like this review, from which I see that Stronger than the Sun is based on the case of Karen Silkwood's attempts to blow the whistle on lack of safety at the Cimarron Fuel Fabrication Site, as is the film Silkwood, which I'm ashamed to say I have never seen.

In the manner of so much of the TV of the sixties and seventies this play is taken to be a warning about the danger of nuclear power. This was certainly the burgeoning view at the time. But I don't think there are a few other things going on here which tend not to get commented on so much, so I'll try to focus more on them.

The first aspect is institutional, or rather organizational behaviour at the nuclear reactor. I have never worked in a nuclear reactor but I would certainly predict that you would run the risk of becoming rather blasé about the risks. In true seventies style there is supposedly a cover up of an accident in the reactor, which is of course an organizational behaviour in itself. In the scene where Kate, the protagonist, talks with the boss it becomes plain that there is a mechanism to report concerns (which seems incredibly go ahead for the seventies), it is stopped by the official secrets act and implied threats if you step out of line. So we have the deadly combination of normal human attitude to risk and the organizational inertia which together ironically lead to disaster.

She even tells her boyfriend Alan, who also works there, about this and his reaction encapsulates the poor safety and security culture of the plant. Suffice to say he doesn't raise this with management so that she can be suspended and prevented from entering the plant.

The second major theme in addition to actual nuclear power is the poor security at the plant because she does manage to get some plutonium out. I just think what a nightmare situation she is in - it is very clear that security at the plant looks good but is pretty rubbish really and people wander around where they want, so she obviously would have good reason to blow the whistle anyway. The security is not helped by her having signed the official secrets act, which is used as a threat in a way which ironically weakens the security of the plant.

As you all know my opinion is that it's humans that are the really dangerous things in the world, and I think that should be the real warning here. Everything that goes wrong in this show was due to human behaviour which should have been predicted and managed in advance. That was also the case at Chernobyl. Despite all the evidence to the contrary, we humans continue to assume that other humans will behave and follow the rules. It's absolutely weird.

We also tend to be cautious at the wrong time. There is a scene where the boss of the plant says 'We can't be too careful, working here'. At that point he has already threatened her with the official secrets act, and as a result the plutonium has already left the plant, and that's too late.

A third theme extraneous to nuclear power is one of paranoia. Kate acts in an increasingly deranged manner as the show goes on. I'm sounding like a 1970s union rep in this post, but she was clearly under a huge strain which should have been recognized and looked after by the plant. Instead they closed her down and gave her no support. There is an effective dramatic theme of dirt and cleanliness running through the show - the dirt obviously being equated to nuclear power - and I would think it likely that the work would bring its own specific stresses.

Where the play goes wrong in my opinion, is that you can't really be worried about the safety of a nuclear reactor and also be plotting to smuggle plutonium out of the reactor to show how lax security is. These two things are mutually exclusive, although I must comment that I keep seeing this contradiction explained by her being under so much stress that she is not acting rationally. For me personally this rather messes up this play because the whole point of being against nuclear power is you think it is dangerous so you wouldn't really walk around with radioactive material.

I would have a further criticism which is that while I'm no chemist and stand to be corrected, the inside of the nuclear reactor doesn't look like any other pictures I've seen and I'm not convinced that the effect of the plutonium on Kate is realistic. I suspect it would be more characteristic of polonium poisoning.

A real feature is the location shooting in the Yorkshire town of Whitby, where I have never been but is gorgeous and is on my bucket list.