Orphaned Episodes: Stones (The Mind Beyond) 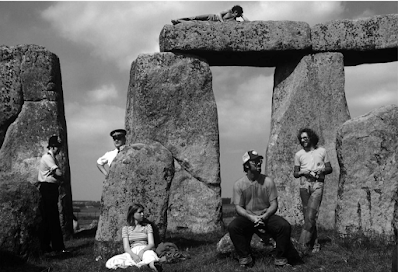 We're in totally classic seventies territory here, with standing stones and so on. I was surprised to find that ley lines weren't mentioned! The Mind Beyond was a distinct segment of shows within the long running BBC2 Playhouse series of dramas. I have not been able to find whether the whole of BBC2 Playhouse survives (unlikely) but have found confirmation that the whole of The Mind Beyond exists. That link also unfortunately confirms that it is unlikely ever to be commercially released because of a sequence in the episode Meriol the Ghost Girl, involving child nudity and what is described as a 'prurient' description of the child's body which has previously made the show be considered unsuitable for release. There are some episodes loose on YouTube (same link again). All I can say is the BBC must have been a weird place in the seventies.

What is clear is that this series is highly sought after and loved. Even though it does meet my definition of orphaned episodes there is therefore a lot about this show online and I would particularly recommend this site for description and intelligent analysis. This means that I can do my usual trick of not bothering to tell you what's going on but rush straight into expressing my opinions.

Perhaps I'm just being obtuse or difficult but for me the point of this play doesn't lie in the stones which are its subject. I think it's much more about some other things. One would be amateur learning versus the ordered, evidenced learning of the academy. In the seventies higher education was just beginning to be accessible to more people than it used to be. This show is set very much in academia and rather than the lecture based learning of the newer universities it has the feel of the seminar based learning of Oxbridge. Much of the discussion of Stonehenge takes place at a dinner party and I just couldn't escape the feeling that this felt like hoi polloi being allowed to observe the clever historians talking.

While the feel is of academia the learning isn't. I have tried and failed to find out what were the predominant theories in the early 1970s for the purpose of Stonehenge. Failed because there are simply so many. I gather the current predominant academic consensus is that Stonehenge was a religious structure built around the path of the sun and that's it. In fact I think I can presume to summarize Ronald Hutton's entire work on pagan Britain as being that it's impossible to say anything about paganism in Britain with much certainty at all.

So the learning looks rather out of kilter but that's because I think it's much more about the sort of amateur learning which is free from the conventions of the academy - indeed as soon as you start making out that rocks have an ability to affect your behaviour the academy has left you far behind. Of course in reality this is the older sort of learning. Hesiod's Histories is what would now be considered a collection of anecdotes with no sources that would give them any academic standing. We can easily forget that our modern ideas of plagiarism only date from the Enlightenment and in the ancient world sources and authorship were approached considerably differently from now.

The key moment in the show which embodies the triumph of amateur learning over academic learning is a very iconoclastic one.

The incident is cleverly contrasted with a government proposal to move Stonehenge completely to London for security reasons (bizarre idea) and to make it easier for tourists to get at. Nicholas Reeve, the protagonist, is dead against this plan, saying that Stonehenge only 'works' where it is and otherwise would just be a collection of stones. And yet, as he becomes drawn deeper into the mystery, presumably under the influence of the stones, he gets banned from the British Museum for ripping the cover off a unique book about Stonehenge to see the annotations inside the cover.

If the BM represents the academy, Reeve's vandalism of the book is the triumph here of unorthodox learning to solve the question. He would not have been able to do that by just reading the book.

This unorthodox reading of this show is further supported by much discussion in the show about language, the ability to understand and other things related to power. This is ultimately again turned over by the mute power of the stones.

I think there are yet other ways you could read this.

I'm not going to beat about the bush, this show is far from immune to criticism. It's the only one of this series I've seen so far but I keep reading on the internet that it is the best of the ones available. This perturbs me a bit because I found it confusing, chatty and too long at one hour. I have now watched it four times and still feel confused about all the ins and outs. I feel it was probably over ambitious - I think the script could have been a film with better resources and less talk.

The points I make about the portrayal of academia mean that I think it's probably pitched just wrong for many people. Anyone who's been to university would be able to see that these academics are talking like sixth formers who are keen but haven't yet learned the conventions. Any auto-didact with an interest in history will also not be taken in. It's a bit difficult to see who on earth this is being pitched at. Actually the approach to learning and evidence feels very much like that in the episode of Worlds Beyond I wrote about so perhaps it's aimed at anyone caught up in the uncritical seventies craze for weird stuff, right up to Stonehenge influencing thoughts and behaviour.

And yet... The strangest thing happened. Remember how I said another episode of this show had problematic child nudity which wouldn't be broadcast here? The show has clearly had an influence on me and affected me. I initially illustrated this post with a different picture, a colour one of hippyish people partying at Stonehenge. It was a lovely picture, with people dancing and wild clothes. I set up the post and scheduled it for publication, then luckily I checked through it again because even though I had read it and previewed it several times I had completely failed to notice that bang in the middle of the picture was.... a penis. Hanging right there attached to a naked man and I hadn't even noticed.

So it seems watching The Mind Beyond does affect your behaviour and cause you unwittingly to spread nudity all over the internet. And this is a family friendly blog!

Although seriously if someone can tell me what the name is for the type of t-shirt the man in the cap is wearing with the mesh lower half, I'd be very grateful. I've always wanted one.