Orphaned Episodes: For Whom the Jingle Bells Toll (The Dick Emery Show) 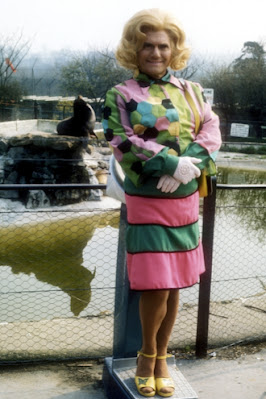 It is April and the weather is just warming up for the Easter weekend as I write this, so of course that's the perfect occasion to blog about the Dick Emery Show Christmas special broadcast in 1980. This may seem an odd choice, but then in common with Dame Hilda Bracket, I have always been very happy being me.

Unfortunately that is not something which can be said for many comedians. Their interior world can often be described as tortured, which is caused by and causes external instability. Spike Milligan is the example that springs to mind, but Dick Emery is no exception (his life really was extraordinary):

Dick Emery seemed destined to become an entertainer from the moment in 1915 when his mother went into labour after staggering off the stage of the London Palladium. His parents Laurie Emery and Bertha Callen performed together in a music hall double act and Bertha’s advanced pregnancy had not been considered a sufficient enough reason to stop the daily performances of their routine. [...] in 1938 he was offered operatic coaching in Milan by the legendary soprano Luisa Tetrazzini. Sadly for Dick though, Benito Mussolini and his various right wing friends seemed keen that the world should be denied the operatic warblings of Dick Emery and so the little matter of the Second World War was organised [...] The Dick Emery Show launched in July 1963 and was a massive hit, running for an impressive 18 years.  Dick Emery remained an odd contradiction though, despite that success. He was a bundle of nerves and neuroses, unsure of his talents and constantly seeking assurances. Five marriages and numerous affairs bear testimony to those insecurities and doubts. Uncomfortable being himself, like many comedians he sought refuge in playing characters and The Dick Emery Show provided him with more than his fair share of grotesque aliases and disguises. [...] In truth many of the jokes and silliness are baffling to a modern ear. Emery’s material is hard to track down now and seldom seen on major TV channels. The 166 editions of his BBC show seem to have been archived away and forgotten about since Emery’s death, possibly to protect us from innuendo, possibly just to save us from being baffled. Source

And this seems to have carried through even into his successful later career: he moved between BBC and ITV a couple of times, meaning that identifying what is what online is a total nightmare. There is a single Best Of DVD release in the BBC Classic Comedy series, but generally much more of his ITV work has been released, as far as I can see. Which is bizarre because the Dick Emery Show carried on at the BBC for literally years. I have not been able to track down how much of it still exists, but a lot is likely to have been wiped. Some episodes and odd extracts of the show online.

I have picked this one for several reasons. Principally because I like it and it is the best preserved of what is available. In typical orphaned episodes style you will find it under the title I have given it and also just as the Christmas special. If IMDb is to be trusted, this is the Christmas special broadcast in 1980. It is also given a date of 1975 in various places in the net, and I think the 1975 Christmas special may have been a different programme completely (this one which has a different cast), although I haven't been able to find it so like so much in orphaned episodes, don't rely on that.

You wouldn't believe how little there is about this show on the internet - I'm surprised because it literally has a star studded cast. I was so relieved to find this brief description because it means I can get on with my usual chat about what takes my fancy. I'll copy it here, though, because you won't find a description anywhere else:

Dick Emery stars as a London gangland boss who has invited two rival London gangs to gather for a Christmas Party in the house of Sir Henry Jarvis Brooke, who whilst spending time in the South of France is blissfully unaware of the goings on.

However the unlikely idea of top London gang rivals enjoying a festive knees up has sinister undertones.  Murder is on the menu as two hitmen have been hired to bump off the two rival gangs.  Unwittingly classic characters Bovver Boy and his Dad find themselves mistaken for the hitmen… Source

As you can see I'm not subjecting you to a Christmas themed Christmas special but to an entertaining murder mystery, which happens to be set at Christmas and is filtered through a Dick Emery lens. Although strictly speaking it is the build up stage of a murder mystery, since nobody actually dies.

This is the second time in this series of posts that the cast of big names has (unusually) been a major draw for me. Seriously this is literally a star-studded cast. I particularly like the gusto with which June Whitfield plays the gangster's moll, and her comment that their afternoon 'naps' are exhausting. Harry H Corbett is the name often mentioned as a surprise star guest. We also have Glynn Edwards (the barman in Minder, Roy Kinnear, Bill Treacher, and Iain Cuthbertson. Even though Emery tends not to show up much in the cult TV world, I think this cast will show what esteem he was held in.

The plot is a fairly standard country house enclosed setting murder story, which has been Emerified by being entirely populated by the two criminal gangs. It's like Agatha Christie set a mystery in prohibition Chicago. All the indications that these are violent people are played purely for laughs, though.

At one point a father and son who have just got sacked from their job as Father Christmas and an elf for stuffing Ronnie Corbett down a well, arrive and are mistaken for the hired assassins. It was the Ronnie Corbett bit which made it for me. The father is played by Roy Kinnear and the son by Emery himself in one of his trademark roles as well the son who messes everything up.

In addition to a mistaken visitor we also, like all country house mysteries, have an unexpected visitor in the shape of the village bobby. He toasts the company with 'Here's to crime'. And it's from there on it all goes horribly wrong with charming results!

This is available in VHS quality in several places on the internet and if you don't want a pretend Christie or a Christmas themed show there are other BBC Emery shows on YouTube as well.

Just a warning that one of the reasons his comedy has been largely buried may be that it frequently reflects attitudes of a past age which may be distressing.