Randall and Hopkirk Deceased: The Best Years of Your Death 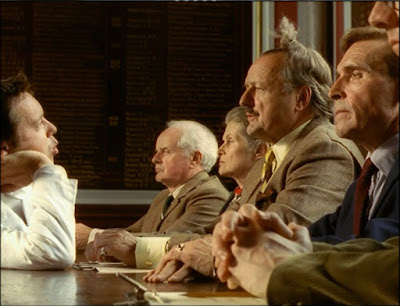 I haven't tended to do tributes to actors from shows which feature here. I have always wanted it to be about the show and have always soft pedalled the actors. When a famous actor dies there will be loads of tributes and I've always tried not to reproduce the material you can read all over the internet.  That said while I have always aimed to blog about what I am viewing, and as it happens the legendary Peter Bowles has died and I happened to have an urge to watch through the remake of Randall and Hopkirk (Deceased) and he appears in this episode, so hence this post by way of a tribute.

Spoiler alert: I'm going to give away the ending.

Of course both this and the original series had a very light touch but Bowles's role as the headmaster of a distinctly odd school is an absolute gift. I'm no actor but I would think the role could be quite difficult because it's both serious and wildly humorous. Bowles plays the total power crazed (and more than a little deranged) bastard to perfection, and in the midst of the chaos that Randall, Jeanie and Hopkirk bring. It is obvious that the school is very far from a happy place and the staff far from professional. It is also obvious that Bowles enjoyed playing this role because, well, you would, wouldn't you?

The show sets up the sadistic private school perfectly. But actual murder? It's an incredibly tricky subject that the humorous element could have turned into a failure but it's handled perfectly.

I love that Randall is so obviously a fake in the middle of the school - even the boys can see he doesn't know his subject of history and he's not exactly knowledgeable about cricket. I love that the even more deranged matron is behind the murders.The full horror of the boy-hating matron thinking that she's their mother and killing those she thinks betray them is really a Freudian nightmare and a place you really don't want to go. While this show is humorous there's a terrifying mother at the heart of it.

The usual tropes are of course present. I love the opening scene where Randall's replies to the unseen Hopkirk sound like he's making a pass at the man on the bench. The ongoing trope of Randall obviously fancying Jeannie is played out at length but not overdone. This is genuinely a masterpiece of storytelling.

But I think what I like best about Randall and Hopkirk in both its iterations is that it isn't real. If a headteacher finds the school matron in the chapel surrounded by the boys chanting that they're dirty with the disembodied heads of vanished members of staff in Pyrex jars, he doesn't just tell the boys to go back to bed. Probably he only would in this show and The Avengers.

In true Avengers style there is also a possible criticism here of our 'ruling' class who are a total mess, and for whom it is more important who you know, where you went to school, and how many backhanders you can give, for example: