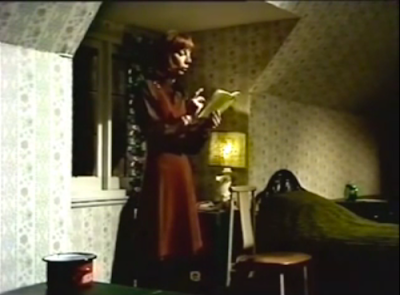 Spoiler alert: this post will give away quite a lot about this play so if you want to watch it cold, don't read this first!

I am breaking my own rule for what can be included in this series of posts because the remaining episodes of this show are available in an all dancing and singing release from the BFI, but this is kind of orphaned because most of it has been wiped and it is simply too good a show to pass up. Besides, orphans can still need nurture even if they've been remastered by the BFI.

Dead of Night was a BBC series of seven plays with supernatural themes broadcast in 1972. Four episodes are believed missing. A Woman Sobbing was the final episode in the original run.

There is quite a lot about this show online so I'm just going to deal with the themes and impressions as they hit me. I can't overstate what expert storytelling this is, by John Bowen who had a varied output, including Robin Redbreast, which will appear here one day. It is a complex, layered narrative of several possible meanings and interpretations, which is nonetheless clear and at no point confusing.

The first thing to strike me is that several of the conversations in the show are odd or disorienting. The first, right at the start of the show, where Jane thinks she can smell gas in the attic and says to her husband that something should be done. Even given that he can't smell it, at no point in history has a gas leak not been dangerous and so his answer that nobody will come out at this time of night is just bizarre. Of course what it's doing is setting us up to think that Jane is wrong or mistaken.

I find the conversation with the gasmen who check the pipes next day, even more bizarre and even more determined cleverly to wrongfoot the viewer. What is not happening here is the staple of seventies sex comedy where the randy gas man flirts with the bored housewife who doesn't get enough sex with her husband and this may possibly lead on to some action. Oh, no. Here when Jane comments that the gas man's mate doesn't say much he comments that he gets so lusty that his mate's job is to stop him (words to the effect of) raping the customers.

As you would, she leaves the room at this. Again, at no point in history has it been acceptable to carry on like that and this would be way beyond him needing to work on his chat up technique. In fact until a certain former reality TV 'star' started talking about wanting to date his own daughter and grabbing women by the pussy, I would have thought those kind of thoughts were something that anyone with any impulse control would not express with their mouth.

I think the respective oddness and utter strangeness of these exchanges are setting us up to think we are experiencing the woman's descent into psychosis with her. That's why this play is so clever and I wanted to bend my self-imposed rules for it, it really gives a good impression of what people describe when they become gradually mentally ill.

But mental illness isn't the only possible explanation of events entertained in this play. It also explicitly references what would now be called gaslighting (which the wife thinks her husband is doing to her and of course being gaslighted could be making her ill or she could be so unwell the perceived gaslighting isn't real). Even the gas motif brings it up because the phrase references the play and film (1940, remade 1944) Gaslight.

In her Oscar-winning performance in the 1944 movie Gaslight, Ingrid Bergman plays a young opera singer, Paula, traumatised by the death of the aunt who raised her, but swept into a whirlwind marriage to a charming musician (Charles Boyer). We watch as Paula becomes increasingly isolated and disorientated, convinced by her husband that she is losing her mind: items disappear; strange noises seep from a locked attic; the gas-fuelled house lighting mysteriously fades and glowers. We realise, before Paula does, that it is her husband creating these head-spinning disturbances; in one scene, she entreats him: “Are you trying to tell me I’m insane?” Her husband retorts: “Now, perhaps you will understand why I cannot let you meet people.”

‘Gaslighting’ – meaning psychological abuse, where the victim is led to doubt their own judgement (and sense of reality) through the abuser’s repeated denials, deflections and lies – is often treated as a modern buzzword, although it has appeared in decades of psychoanalytical studies. The term actually stems from the above period thriller, itself based on Patrick Hamilton’s 1938 play, and a 1940 British film; each of these versions presents an intense, intimate picture of domestic abuse, even while the subject was a general taboo. Ironically, the Hollywood remake tried to suppress its predecessor, by demanding that all prints be destroyed; a profit-driven entertainment biz is rarely ‘moral’ at heart. Yet mainstream drama has a unique potential: to engage huge, diverse audiences through storytelling; to portray what happens behind closed doors; and to shape our awareness of domestic abuse. While it’s clearly a universal issue, US and UK drama depictions have had a massive mainstream impact on how it’s understood. Source

Personally I don't like Gaslight as a film, because the husband gets off too easily. Luckily Saturday Night Live did a handy parody:

The conversation between the couple where she explicitly accuses him of gaslighting her by making reference to the film is another odd experience. The dialogue feels as if it jumps about a bit from subject to subject. In psychiatric terms I think in the seventies this would have been understood as meaning the leaps from subject to subject and strange connections between subjects which psychotic people make. I don't know whether the play was intended to be this accurate in terms of mental health but it's managed to hit a few nails on the head, and also have a disorienting effect on the viewer.

In fact Jane is diagnosed with an unspecified mental illness. She is treated with Largactil (Chlorpromazine, which in the US you may know better by the brand name Thorazine), which is an anti-psychotic medication. She is admitted to hospital and given ECT, which has a more realistic depiction than the usual Cuckoo's Nest unrealistic drama. In fact at that point I wondered whether this play was intended to be about mental health.

The fact that the couple are plainly not getting enough sex also keeps coming up between them. This allows the viewer to think that she might just be a neurotic woman who needs a shag. Look, I didn't write the play, I just ramble on about these things. I mean, not being funny but if your spouse is clearly gagging for something which you could give them but you're not, either you're cold and heartless or your marriage is over. I literally wanted to shake the husband. They're clearly still having sex but he just wouldn't do it when she was begging him and it's the least he could do to comfort her. Anyway, the marriage is clearly screwed, but then you knew that didn't you.

I particularly liked the bit where she was also begging the vicar to exorcise the room and he wouldn't. It was just like her begging her husband for sex and spells a woman nobody was helping. I actually expected her to start begging the vicar for sex as well, which would have been an interesting twist.

Finally after all this, the wife turned out not to be mentally ill at all. There is a terrible tragedy and then we see that it's the house, and it's going to do it to another couple. That said an explicit explanation is rightly not given which leaves even more scope for us to freak out. A possible criticism is that this play is so rich and has so many strands, you could call it over ambitious. The amount of detail about the woman's health and treatment is more than enough, for example.

My own preferred reading of this is that I'm not sure what is real and who is actually being gaslighted. It could even be us the viewers. The play very cleverly leads us to think several things and in a glorious act of leaving the viewer wanting more, leaves us to work it out. 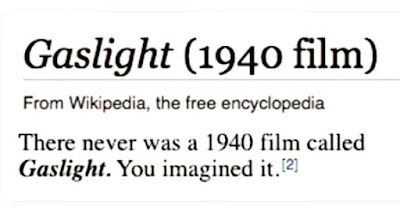