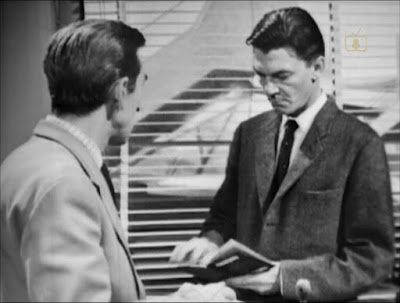 Bit of an odd feeling to be writing about a show which is still being broadcast! Talking Pictures TV broadcast what's left of it. No Hiding Place was a phenomenally popular show from the late fifties into the sixties. So what do you do with such a successful show? Obviously you wipe the vast majority of it. Honestly it makes less sense the more those words go through my head. It escaped the fate of its two predecessors, Murder Bag and Crime Sheet, which are considered completely lost. The majority of No Hiding Place is missing. Apart from TPTV this episode is in several places online and some episodes are available on quite expensive amateur DVDs.

It's a pity, because I like this a lot. It's a straightforward investigation of a serial killer. What makes it very gripping is the succession of red flags we see as the show goes on, and really this would be good viewing for anyone doing online dating!

The other thing which really strikes me about it is in the depiction of the criminal as a criminal, and the police as good men who want to stop him killing people. This function of the police speaks of a fairy tale age when the police (and the government, come to that) were seen as bastions of society, maintaining the right order and smooth running of society.

I see that the jargon in sociology for this view is structuralism and that it is a structural consensus theory of society. That is we agree on the basis of society and the things which keep it functioning. I don't think anyone could have foreseen that this stability would shortly be questioned.

The trouble is that the consensus and stability are, in my opinion, somewhat illusory, and it's no surprise that the fans of our (imagined) glorious past in Britain love these shows, because it allows them to ignore the reality which has made the fiction unravel. For example, if you've got a raging psychopathy going on, professions like the police and the church will be a magnet to you, and the events of the intervening decades have shown some of the reality.

So even though this show is about protecting women from a serial killer, in reality the criminal mindset it shows is far from rare. And in fact the pretence of authority, stability and safety were just pretend. Another example would be the Stranger Danger approach which was taught to kids for decades - in reality danger from strangers is rare and we are all most likely to be assaulted, abused and murdered by someone we know.

Did I say that I do like it even though it encapsulates a long gone world view and doesn't include any of the police corruption which has enlivened TV about police for four decades?

Widely available on the internet in fairly good quality.