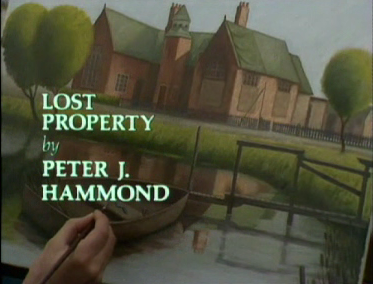 Unnatural Causes was a 1980s series made right here in the centre of the entire universe by Central Television. It was all about unusual deaths and if I say that writers included Nigel Kneale, Beryl Bainbridge and Lynda la Plante, you already know this is going to be some quality television. It is honestly bizarre that a series with writers of that calibre (pronounced calEYEber à la Tony Hancock) should be so little known and never having had a commercial release. I personally only learned of it last week.

This one is, as you can see, by the legendary Peter J Hammond, and he poured into it all the weirdness of the universe which was left over after Sapphire and Steel finished filming. Like all good TV it can be read on several levels and most of the commentary online rather tends to focus on notional supernatural aspects. I haven't seen the others but apparently this is the only one of the series which can be read as having a supernatural element.

Another reading could be around the relationship of the couple at the centre of this drama, and the viewer is drawn in to speculation about the events which have led the couple and the school where they are. Rightly it doesn't answer all the questions, leaving you with things unanswered but there's something very wrong with the school and with the couple who buy it (using money she has come into).

The school is fire damaged, but what is wrong is that all the contents of the school is intact. Desks, textbooks, you name it, you could just walk in and live an elaborate school fantasy. Apparently it was a private school owned by 'two old dears' who were under insured and couldn't afford the repairs after the fire so had to sell. Not a good omen.

The complete school set up means that someone could just walk in and have a whole school fantasy, which is exactly the situation at the start of the episode. And that is exactly what has happened. The woman has bought the school and clearly has a school fantasy going on. This cleverly sets up the situation to be all sorts of wrong. Anybody can get themselves into a business and later make discoveries about the reality that make it unattractive. I read once about a woman who set up a pottery. She had no idea what hard work throwing pots all day was and was unprepared for the damaged joints, numb leg, and so on. However we have all been to school and we all know that we were little shits, so surely beyond calling the register to a line of dining chairs, running a school is not a fantasy or a dream.

In fact the only people who have a fantasy school are the sort of ladies who dress up business men as school boys and tell them they've been very naughty, and sure enough there's something very wrong in the relationship of the couple who have bought the school, as I said above. As a married couple they are over, let's put it like that. Yet they've been at the school a couple of years, camping out in the school building which does not have living facilities. The woman is the one with the school fantasy but she treats him as if he's the handyman. He becomes verbally abusive to her when she tries to make him stay and he throws her pretence and the reality in her face. She also gets in some violence when she hits him round the head with a cane.

There's all kinds of wrong here and no direct answers. They clearly haven't had sex for a long time but he announces he's leaving and then ties her up in the cloakroom for sex play. He has previously told her that he won't try anything, but is also clearly gagging for it. Once again it's all wrong, we're talking about a woman who plays a record of children singing in assembly because she wants to run a school.

Both of these roles must have been such hard work for the two main actors. The levels of fantasy, relationship, sexual violence, reminiscence and some obvious unnamed other trauma make this so rich.

It is at the point the husband/boyfriend mentions sex play that the deaths occur. I don't think you can find a description of what happens online and I'm not going to spoil it here because it introduces another mystery which isn't explained. As I said there is a whole other supernatural understanding of this show which I haven't touched on at all.