Orphaned Episodes. It's a Square World 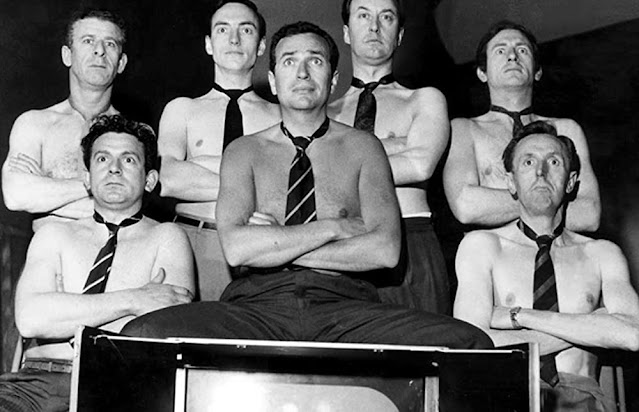 Tip of the hat to Joppy for letting me know this show existed. There is one whole episode of this show here and I see a record was released which is available on Amazon. Honestly it's like being back in the sixties with the post-broadcast availability of these shows. I had forgotten what it was like, although I have so far resisted buying any of the available novelisations of shows I can't track down. That would be being a bit too faithful to period.

Joppy rightly commented that you couldn't make this show now and as soon as I discovered that a real robbery took place at Television Centre and the staff just assumed it was yet another stunt by Michael Bentine for this show and so just waved the robbers in (Source), I knew I would love it. There are of course other ways in which you couldn't make this show now - some of the racial typing is right off - but in every other way it is an absolute joy.

It was highly esteemed at the time and Bentine won a BAFTA for it; it even won a prize at the Montreux Festival. It had a crowd of famous faces including Derek Guyler and Clive Dunn. Not distractingly well known faces though - you notice them but the actual show takes priority. So obviously what you do with such a successful show is decimate its episodes. According to IMDb 11 of its 56 episodes are missing so it's not completely gone.

And it's a delight. In fact it's so good I'm going to borrow someone else's description of what goes on because I can't better it:

As you'd expect from one of the founders of 'The Goon Show', the show was rich in inspired lunacy, employing animation, puppets and Visual Effects, in sketches such as 'What Goes On In A Singer's Mind' ( little animated men running around inside a man's head ), a B.B.C. reporter interviewing a sexy French film-star loses his composure and tries to kiss her, a Chinese junk sails up the Thames and fires at The Houses Of Parliament, the source of the Thames turns out to be a giant dripping tap, a spy disclosing stolen rocket secrets over a public phone is astonished when the box takes off like a rocket, the B.B.C. T.V. centre is attacked by cowboys and Indians and, in a later episode, is shot into space. Many believe this to have been a major influence on later flights of fancy such as 'Monty Python's Flying Circus' and 'The Goodies'. Source

I have watched this episode several times for the purpose of writing this blog post and I literally just have to say that I am in awe. It is giving out one of the best signs of quality television to my mind: not only does it not get stale with repeated viewing but I am noticing new layers of meaning and things I missed the first time. Such work on a show destined to be seen once!

Quite a lot of this episode (or show?) takes place in the village of Doomsbury which exactly divides north and south England, including a hilarious conflict between the power companies of the north and the south culminating in a dispute about installing heating in the town hall. I also particularly like the scene where Guyler tries to get Bentine to shoot him to try out his bullet proof vest but Bentine can't because he likes him too much. 'Couldn't you go off me a bit?'

I don't have any criticism and would recommend this show very highly.

Finally there are also other odd clips around of the show and here are a couple: