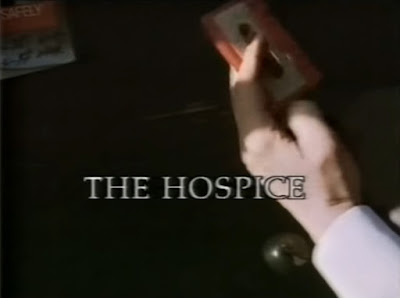 This poor orphan is as much of a Dickensian orphan in television terms as you could wish. Made by the now defunct ITV franchise HTV West, Night Voices was a collaboration intended to be broadcast in Europe as well as here. Many of the episodes were written by prolific author and conservationist Robert Aickman who specialised in strange stories and edited many anthologies. It was produced by Patrick Dromgoole, who has so many legendary 1970s TV shows to his credit.

The series was apparently made in 1987. I say apparently, because this is where it all starts to go wrong. It is not entirely clear why the series was apparently not broadcast until 1993. Not clear because it seems to have dropped off the face of the earth. Hell, at one point even Kaleidoscope couldn't find out when it was broadcast and most of its episodes weren't even on IMDb. To this day IMDb has this down as a movie - and it isn't. So we know it was broadcast in 1993, as to what then happened and whether it got broadcast in Europe, I honestly couldn't say.

Needless to say it's become one of those series that people want to see, and internet message boards are full of people who want to see it. I've even found messages from the original cast wanting to see it because they never have! This one episode is loose on the internet and if this is anything to go by the series would have been a humdinger.

I have allowed myself the indulgence of expatiating above because normally I would rush on without describing what happens in the show, on to analysing it and giving my jaundiced opinion. But in this case, while I'm still not going to describe it, I'm not going to do much in the way of analysis. The reason for that is this story needs to impact the viewer with its own impact. So haven't read it but apparently the story this is based on takes the reader through the events of the story in a very stark way, making you wonder what the hell is coming next, just as this adaptation does, and I honestly wouldn't like to spoil it.

I would however particularly refer people to this excellent analysis which has more detail on adaptation and Aickman. I kept thinking that the show reminded me of something and was thinking about Cold Comfort Farm but was delighted to find this wonderful description here:

Jack Shepherd gets lost in the countryside and eventually, after passing a statue that resembles Christ which turns its head in the direction he takes, he runs out of petrol and ends up at a country house. He's invited in and finds himself part of a large dinner party whose members resemble OAP versions of the cast of the movies of David Lynch, John Waters and The Rocky Horror Picture Show.

There's possibly also a bit of Pete Walker but don't worry, the show doesn't have quite the shock value found in Waters's work. Actually perhaps the mode of transportation by which Shepherd leaves the hospice at the end may be slightly John Waters.

The last thing I saw Shepherd in was Ready When You Are Mr McGill, where he is gloriously deranged so I was ready for him to be odd in his role of the only sane person in the weird place who begins to lose it - or rather has to go along with the lunacy. Jonathan Cecil is excellent as the distinctly odd man he has to share a room with - an interesting twist on his urbane act as Hastings in some productions of Poirot stories.

So basically we have the normal person ends up in a strange place and it goes weird paradigm, and The Hospice doesn't over explain. In fact at the end it hasn't answered pretty well every question and to over-analyse would spoil it.

This is stonking good quality television and I have joined the ranks of people who hope the full series can be released.