Orphaned Episodes: Take Off Your Clothes and Live (Man Alive) 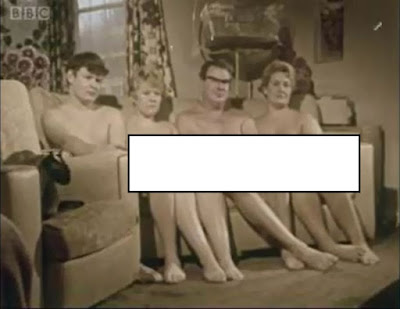 I commented before that I wasn't expecting writing these posts to become an emotional rollercoaster but it has. In addition to the sense of loss I mentioned before, I am finding this bringing out some very strange reactions, particularly when you find yourself on the missing episodes forums. My main constant thought is that despite television having been a medium of several decades, its record keeping is oddly all over the place. You would think that commercial TV would keep records of what it broadcasts, but in reality the records are a nightmare. On the missing episodes forums you find contradictory accounts of what is broadcast when and what remains in archives. I wonder whether this simply reflects the early approach to television as a disposable medium and also possibly different contemporary approaches to record keeping? I really don't know!

Then I find I am reacting strangely to the preservation status of some shows. I look at some clips uploaded to YouTube and I just think that I can perfectly see why the show would be wiped: some of this is personal taste but there are obviously some shows which had a relevance to a specific time and place. Local news and magazine programmes, for example, have a very specific appeal and I can see why you might wipe them.

It doesn't always make sense and I frequently wonder what stations were thinking. It's not even as if what survives is necessarily the best. So I find I alternate between agreeing with wiping stuff and wondering what they were thinking. An awful lot of 1980s children's TV is uploaded to YouTube, and beyond nostalgia for the time an awful lot of it is utter dross. Meanwhile classic children's TV series like The Wind in the Willows survive patchily or in sub-archive quality. How on earth has a medium which only goes back a century managed to leave such patchy history? It's wild.

You will tell from the above that I have found more gems on YouTube for these posts and also some shows that I didn't know existed and am glad I have discovered. I will continue to be driven by the principle that I will only blog about shows which interest me - this blog is not an academic exercise and it is not an exercise in preservation, so my own rather arbitrary taste will govern what appears here. And so we continue.

Man Alive was a long running UK documentary show. To clarify, I mean this show and not this US show which has the same name and was also a documentary show. I have picked this episode about nudism because it tickled me and have walked straight into another confusion because there was a 1963 film about nudism also called Take Off Your Clothes and Live - it's almost like they're all being confusing to spite me. There are a number of this show on YouTube and even on the BBC iPlayer if you want them in better quality. According to IMDb this show didn't hesitate to do fearless journalism and I am not sure whether the ones currently on the internet are representative of its whole output.

Take Off Your Clothes and Live is a documentary giving the naturists' side of what naturism is about, and doing it very well without a single titter. If I have a criticism it is that the show avoids the reality that while naturism is not sexual for naturists its main problem is exactly that other people do see it as sexual. While reading round for this post I have read that the pictures used in naturist publications will usually highlight models rather than normal people and that the same pictures will also be used in explicitly erotic publications. In the show there is an interview with the editor of Health and Efficiency but I feel the reality that it was always on the top shelf is rather avoided.

What I found most impressive about the journalism was that it exactly raised the thoughts I had. At various points you see nude people digging out a tree stump, using a band saw and around a boiling kettle and I found all of these shots terrifying. In fact my main impression was how dangerous it could be! At one point a man is interviewed who comments that cooking sausages could be dangerous for a nudist, which is of course true, but to my mind using an axe without ones wobbly bits being contained by clothes is making an unnecessary point. There was also a mention of sun tanning as one of the aims and of course it is very dangerous to have too much sun exposure. The naturists make the point that nudity is feared and made unnecessarily rude, but I really don't think nudism is the answer. And I'm the guy who tends not to wear a shirt! I don't think the health argument for naturism holds water and is indicative of its origin in a previous age of sun bathing as a health fad. The same age gave birth to the long gone open air schools.

I am more convinced by what the naturists have to say about being with like minded people and I wonder whether nudism is by way of a symbol attracting like minded people. Interestingly part of the show is set at a naturist club called Spielplatz, which according to this page was the meeting place of Ross Nichols and Gerald Gardner, founders respectively of Wicca and the Order of Bards, Ovates and Druids, which indicates its importance in the twentieth century counterculture.

Ultimately this documentary doesn't convince me about naturism but is an excellent piece of journalism which allows the views of its subjects to stand and is a fine example of how to do it. I can see that more intensive questions would have made it too confrontational. One of the things I like best is that the narrator has the most frightfully far back accent. She pronounces brown as brine and it's marvellous.