Orphaned Episodes: The Murder on the Bluebell Line (QED) 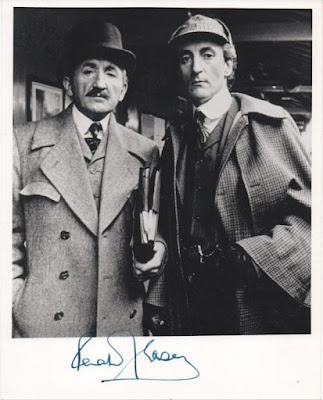 QED was a long running series of popular science documentaries made by the BBC (as so often on this blog the majority of shows in this series of posts have been made by independent television).

Murder on the Bluebell Line is a dramatisation of the Piltdown Man hoax, so although it looks and sounds confusingly like a murder mystery it is well within QED's remit of popular scientific documentary. It takes the form of Sherlock Holmes and Dr Watson doing a live investigation of the evidence: the reason they are used is that Sir Arthur Conan Doyle was suspected to have been involved in the deception; as Watson rightly says, if Doyle would make that up even Holmes and Watson could be fictional!

As a documentary it proves remarkably revealing: not least because of the clever juxtaposition of fiction and reality, but in its revelations of human attitude. Having read round a bit for this and having watched the show a couple of times I am very struck by one place where Holmes comments that the Piltdown hoax could shake people's faith in science. Of course empirical science doesn't need people to believe in it, it observes repeatable facts with measurable controlled measures and is quite happy to have a particular thesis refuted. As happens whenever the fear of technology comes up here the problems only start when people start misunderstanding the results. Reading around this I have discovered that many in the scientific community were suspicious of Piltdown but didn't blow the whistle on it because it was the best evidence at the time for the theory of evolution, which they did believe in. It is also possible that other scientists added other hoaxes to ridicule the main one by way of pointing out unsubtly (but unprofessionally and unscientific) that the Piltdown fossils were fake. In reality hard science is better leaving gaps if there is no evidence, although I do love the Aldabra rail bird which became extinct about 100,000 years ago and has evolved back into existence again. What a legend.

The best example of pervasive scientific fakery is the bone tool found separately at Piltdown shaped like a cricket bat - how obvious is it that it's a hoax when 'the earliest Englishman' is found with a proto-cricket bat! Murder on the Bluebell Line also brings out the competition between British and other scientists to find the missing key of evolution. Ultimately all this competition and politicking was not what proved the bones were a fraud- it was cold hard science in the shape of technology and imaging in the 1950s which dated the bones and showed how the fraud had been put together. I particularly love the bit where Holmes and Watson visit the 1950s.

Is it just the influence of the twenty first century or do I keep returning to the subject of how humans wreck everything?

Much of the show takes place on a steam train, depicting Holmes and Watson talking about Piltdown Man. The titular Bluebell line refers to the old railway line down towards the coast from London which runs through Sussex, which is where Dawson claimed to have found the fossils. It is currently a heritage line so I expect the show was shot on the actual Bluebell line. The murder of the title refers to the murder of the fictional Holmes and Watson if their creator were to lose his credibility as a result of participating in the hoax. To be frank I think this would be the biggest criticism of this show, that its concept and title are very clever but perhaps a bit too clever for their own good and the title is misleading.

The show is however gloriously atmospheric and does what it aims to do. Hugh Fraser and Ronald Fraser are particularly well suited to the roles. I didn't know that they are (or were) father and son - possibly the age gap is unfaithful to canonical Holmes and Watson. Hugh excels in the condescending intellect stakes while this does actually make me wish they had done a straight Holmes and Watson. The show is in several places on the internet in VHS quality.