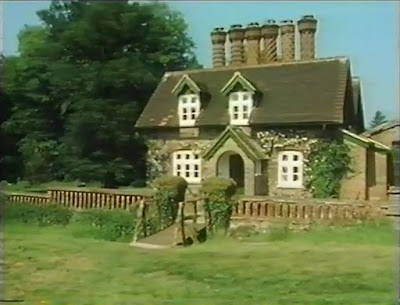 I will not be posting about much children's TV in this series of posts. Not for lack of material - there is a shedload of 1980s children's TV which has survived because of VHS and much of it isn't of the quality that I like to grace this blog. There is also a lot of TV for schools, and while I favour quality, I have always gone for entertainment on this blog rather than too much history or commentary, or anything too didactic. Interference was made by the ITV schools TV series.

There are a number of reasons Interference is appearing here, predominantly that it is a great story, which while obviously intended for kids can also be appreciated by different audiences in different ways. This is of course always the sign of quality, complex plotted, drama.

You could for example watch it for its countrified setting without mains electricity. Personally I'm a city person and the idea horrifies me (I used to stay in a village just outside Worcester and could never sleep because it was too quiet) but apparently there are a lot of people who like the idea of an idyllic country cottage. Incidentally - as usual veering off the subject - the Countrycide [sic] episode of Torchwood pretty much sums up my attitude to the country.

Another aspect is the very obvious fact that the parents' marriage is proper f***ed and probably has been since day one. Dad is, well, I'm not sure how to describe him, but let's say he's the kind of man who tends to get murdered by his wife who then gets off because of the severe provocation. It is interesting to see how this really bad relationship filters through the kids and how they react.

However this programme is much better known as a ghost story, and in fact has managed to appear on the Wyrd Britain blog (do have a look, it's a much more sensible blog than this one) where Ian summarizes it as seemingly

Mum and three kids head to a house in the country and after a relaxing first night in front of the fire loathsome shouty dickhead dad follows along behind. When he gets there and turns the generator on they discover that the lights don't work properly and there's an old lady crying on the TV, radio, telephone and hi fi (even over Iron Maiden's Aces High).  As tensions escalate the kids begin to take matters into their own hands in an emotionally bruising third act.

I was going to summarize but that is so much better than what I would have done. I see it is also mentioned in the second volume of the Scarred for Life books about our traumatic British media.

The effect of the woman wailing through every appliance is bloody scary and is perfectly juxtaposed with the totally messed up family where every conversation starts and ends as a row.

There comes a point where the dad actually leaves and we all get to heave a sigh of relief, not least because it is after that the mother makes the change which stops the wailing. There isn't an obvious supernatural explanation given for why the woman was crying or why it stops but the natural inference is that it was related to the parents'bad relationship.

The show is on YouTube in VHS quality, with all three episodes together and it's a cracker.

My favourite line is where the son comments that a woman is just crying on the TV and the sister replies that it must be one of those foreign films where nobody says anything.