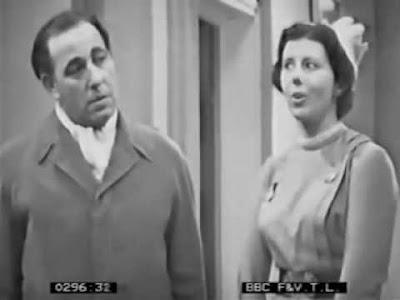 Comedy Playhouse was a comedy anthology series which ran from 1961 to 1975 and which showed many episodes which became pilots for later series (per Wikipedia) including Steptoe and Son, Meet the Wife, Till Death Us Do Part, All Gas and Gaiters, Up Pompeii!, Not in Front of the Children, Me Mammy, That's Your Funeral, The Liver Birds, Are You Being Served? and Last of the Summer Wine. Pretty televisually and comedically seminal, then. It also had a revival for three episodes in 2017. There are a number of episodes online but this one is a second series episode written by Galton and Simpson which already shows we are in quality light entertainment territory.

The Handyman has a very simple plot. Basically an unemployed man gets a job as a handyman at a so-called health farm where the customers are on tiny diets, winds up feeding them against the rules and eventually comes to an understanding with the owner of how they will alternately feed and starve the customers and make it profitable.

On one level the show could be a commentary on diet culture and rip off health farms. We are in a better position now to know that diets a) don't work and b) make you put weight on, than we probably were in the early sixties but this show is devastatingly accurate in its portrayal (only slightly caricaturing) of health farms. 'Food is bad' is the motto. However it becomes clear that the customers go to the health farm to get away from their families and the awful food is a downside for them. There's even an acknowledgement that people who go there return to eating what they like when they leave. All a bit pointless but with being fed and starved alternately everyone gets what they want and the place keeps it's reputation.

In a change to my usual practice a lot of the joy of this is the familiar faces in the cast (I have never claimed to be consistent). The handyman character is played by Alfred Marks. And reading up on him is how I found that he, like many a comedian, had his start at The Windmill Theatre in London. I had no idea they had comedy acts there because it is much more famous for its nude acts where the girls didn't move. This was because the owner got this past the Lord Chamberlain by pointing out that nude statues weren't rude so nudity was allowed but the girls couldn't move. Wild, isn't it.

Actor Kenneth Moore's first job in the theatre was at the Windmill and he recollected how they would deal with potential troublemakers:

“We had a little peephole covered by a small piece of dark velvet.  I would lift this velvet and look into the auditorium without anyone in the audience knowing I was doing so…  Middle-aged men, usually wearing raincoats, would place the Evening News and The Times on their laps…  and do the same thing when the tableaux was in progress… This sort of behaviour could be embarrassing to other members of the audience, and also might result in our licence being revoked if anyone complained to the police about it.

I was told to keep a lookout for these undesirable activities and I had a simple code with the front office when I spotted anything.  I would pick up the house telephone and say: ‘A4, Wanker, Times. C17, Daily Mail.’

The commissionaire would then stride down the aisle to Seat A4, and then to C17, tap the man on the shoulder, and say, ‘The manager wishes to see you in his office.’

The commissionaire, an old soldier, was under strict instructions not to say ‘Stop wanking’, or some other more forthright comment, in case there had been a misunderstanding, or the client denied the charge.  His defence could be, ‘I was just scratching myself’ but always the men concerned realised that they had been rumbled, buttoned up their flies and left quietly.”

The doctor who owns the clinic is played by Anthony Sharp, whose urbane tones I love whatever he appears in. Famously he is in Clockwork Orange, however for an unusual role for him you have to see him as the homicidal priest in the Pete Walker film House of Mortal Sin (1975).  He also had a wide range of TV roles and even appeared in The Young Ones. The third familiar face is the labour exchange worker played by Frank Williams, who was the vicar in Dad's Army. Ironically he was cast as a vicar in several subsequent shows.

I have veered off the subject even further than usual so let me wrench myself back. This episode is available in quite poor quality in several places online. It doesn't pretend to be anything other than what it is - an entertainment - and is well worth watching to be entertained. I have a couple of others from this series which I haven't watched yet but may appear here at some point.