Orphaned Episodes: Facts of Life (Our Man at St Mark's) and Two Appeals 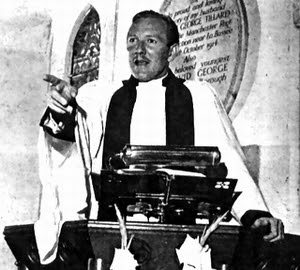 Our Man at St Mark's was a sitcom which ran from 1963 to 1966 about the Vicar of Felgate, initially played by Leslie Phillips and then by Donald Sinden. Only four episodes are known to survive and Facts of Life is the only one I have been able to track down online. In a change to my normal policy, I should make clear that the two acting greats who play the key characters are much of the reason to see this and they're both great. In fact I think to say watch this show starring Leslie Phillips as a vicar and Joan Hickson as his housekeeper, is enough recommendation.

Actually the best bit is seeing Leslie Phillips in a role far removed from his normal rather louche roles. Sitcoms as such don't tend to do much for me but this is worth watching simply for the scene where the vicar talks to a little girl who has gone to see him because she thinks she is pregnant. This scene is so sweet!  He also has a man to man chat with the notional father and honestly both scenes are wonderful. Joan Hickson as Mrs Price is an interesting very fiery character who can manoeuvre the vicar like nobody's business and joins in with his girlfriend in her campaign to stop him wearing his dog collar to a party.

I have one very idiosyncratic criticism, which is that I find it implausible that the housekeeper would address the vicar as Reverend. At the time you would address a priest of our national church as Mr Parker or more commonly by his job title of  Vicar (or Rector, the difference is here). I'm going to stop nit-picking now.

The show is largely studio- bound and well visible despite not being restored. It moves at the pace you would expect for a sitcom of this age, without frequent changes of scene.

I have two things to ask you my wonderful readers. The first is from a reader of the blog to help identify a 1970s British TV series:

I have been desperately trying to find an episode of a British ghost series I saw as a kid in the 70s It had a group of people trying to trap a ghost. First trying to tie it up in rope and there was a cool little practical effect of rope looking it was tied around an invisible figure. Then the try covering it in plaster, which slowly cracks letting the entity escape. It was definitely British, shot on video and showed up in the US the same time as "One Deadly Owner" played here on Television as a stand alone late night movie. Thanks for any insight.

This is a sketch of what he remembers: 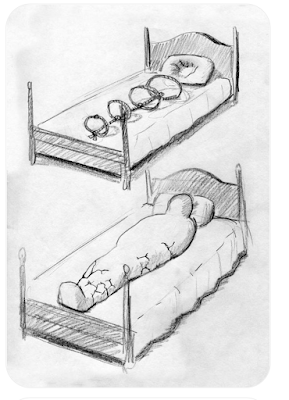 Secondly, if anyone can identify the episode of The Rockford Files from which this scene comes I would be grateful (you can leave a comment). It looks absolutely bizarre! 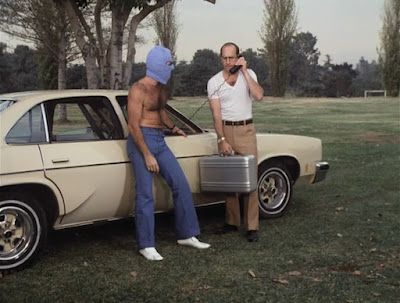