Leap in the Dark is a confusing series which takes some understanding, which may explain why it isn't exactly all over the cult TV blogosphere. It picked up on the trend in the seventies for all things supernatural and a total of twenty episodes were broadcast in four series between 1973 and 1980. What makes it confusing was a couple of abrupt changes in what it did. Series 1 is straightforward documentary, series 2 is dramatisations of documented cases and the last two series are just plain fictional dramas with no claim to have happened in reality. You would be right to think that this would be a recipe for gaining and alienating audiences with the likely result that people would just give up. However the show also made up for this by attracting some serious big names so it's not all bad. Apart from the pilot the first series is missing believed wiped, and unfortunately the way they are labelled on the internet doesn't make it clear what series each episode belongs to, but IMDb has a complete and clear list of episodes so we press on regardless. I have also seen DVD sets online presumably made by fans.

I have chosen The Vandy Case because it is a second series one with an element of documentary. In fact it is very clearly a straightforward dramatisation of a case from the annals of psychic phenomena, and you can read the account here, but to cut a long story short, the brothers of a drowned man had some questions about what happened and went to several psychics, taking steps to conceal their identity, and this show is about what happened. 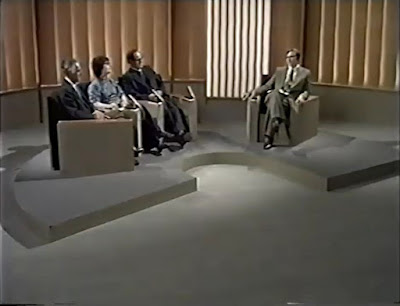 The show is tightly scripted and tells a complex story without unnecessary complications. The period settings and details are perfect. It also doesn't take a prosyletising approach: it tells the story as in the account I've linked above and lets it stand. I can see there would be lots of discussion among viewers after this one. I prefer this show to Worlds Beyond (dealt with in the introductory post linked at the beginning of this post) because it doesn't have the dogmatic assertions that psychic research is a science  and doesn't have the mentions, almost sponsorship, of the Society for Psychical Research. There is a segment of the show where a panel talks about it, including a representative of the SPR (who interestingly thinks the case isn't good evidence for survival) with a psychologist and a psychiatrist. The discussion gives a slightly mixed feel to the show and you may think that dramatizing the brothers' story is unnecessary, however it also provides an interesting counter to the dramatisation. It is particularly valuable that the discussion questions the value of the psychics' statements and they suggest explanations for what they are saying which do not include the dead Edgar Vandy talking to them. It is absolutely fascinating.

I am not sure how this got onto the internet as it is better than VHS quality to my mind. It is very intelligent television and I highly recommend it. If you don't like the dramatisation and discussion format, the third and fourth series episodes are very good dramas in themselves.