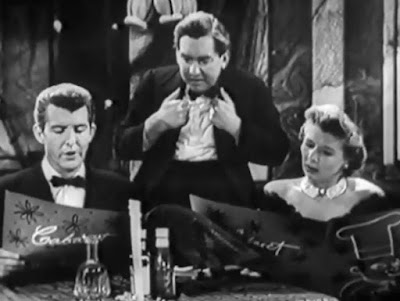 I didn't know this show existed until yesterday but am delighted to have found it. It is Hancock's first venture into television after his previous successful radio series.

After achieving massive success with his BBC radio show, Tony Hancock's first television series was not for the BBC, but for Associated-Rediffusion's Jack Hylton Presents strand. Hancock seemed a little lost without his radio writers, Galton and Simpson, in what was a rather variable series, but with the help of scriptwriter Eric Sykes, he managed to get into his stride, aided by the excellent June Whitfield (Hattie Jacques in one episode), and other regulars Clive Dunn and John Vere. Hancock's visual and verbal ability to be himself, everyman, while partly in character, helped offset some weaker material, and the auction sketch in episode 6, with its spontaneous Mr Punch routine, is close to his best.

We are constantly reminded that this is live TV: apart from inevitable fluffs, and some mistimed interventions, there are deliberate and knowing collusions with the viewing audience: rivals BBC get fun poked at them, the Associated-Rediffusion camera and cameraman are involved in vision in one sketch, and the commercial break is directly referred to.

There are 'safe' older jokes (Arthur Askey was a veteran even in 1956) and allusions to older variety staples, but these are balanced with more topical items. There are even some quite risqué asides - notably Hancock auctioning off dancing girls for himself, and a Lady Chatterley reference. As ever with Hancock, pretensions and pomposity are pricked - modern art, for instance, and a dig at Jack Hylton's expense(s). The series generally follows a sketch format, although this wasn't his strength, with a comic dance routine (and a Whitfield song to cover Hancock's costume change) and some gems amid Hancock's unease. Source

This is an odd episode which has found its way onto the internet and can be seen here. I am delighted to say that although it is currently orphaned there will be a commercial release of series 1 next month. Series 2 is believed lost.

I actually find this fascinating as being Tony Hancock veering slightly from the sitcom format of his radio show into a more sketch based format, before his later TV shows settled back into the sitcom format. It's like watching a comedy genius experimenting in front of you! The show is spread across three sketches and Hancock is obviously developing from the radio show. There are spoof adverts in between done by Eric Sykes.

I love the guest stars here. He also has Clive Dunn playing an old man (to be honest he always played an old man, but sometimes you just have to do what you're good at and I see he was born in 1920 so wasn't even 40 when he did this). I love Hancock as the lawyer putting words into the mouth of Dunn the witness, in the court scene. I particularly like June Whitfield in the role played in the radio series by Hattie Jaques/Moira Lister. This show is a delight. I think I like him best as the owner, chef, waiter, orchestra and doorman of Chez Ancock, where of course he doesn't understand people ordering in French. 'Sorry I've been so long, I had to attend to the duke's wedding breakfast'.

To criticise would be churlish. This is stonking good television.