Well my planned series of posts on odd episodes of shows which are floating around the internet and have not been commercially released, has started incredibly badly! I started this with a good dozen episodes of shows which I thought would be eligible. Some turn out to be bits of films pretending to be TV shows, some have actually been released, one turned out to end abruptly ten minutes in when I actually watched it and some are just plain bad. But we press on. In the midst of this I have discovered the phrase 'aspirational television', which was used for one of the shows I have discarded. As far as I can tell this refers to shows like Howard's Way, where you watch rich people worrying about their rather different worries from those of ordinary people. I had no idea this concept existed and will not be inflicting it on you here.

The actual subject of this post is the show Perfect Scoundrels which is almost the exact opposite of aspirational television because it is about two con men. When I tell you one of them is uncharacteristically played by Peter Bowles it will be clear he's a very upper crust con man. I have bent my rule about not including shows which have been commercially released slightly, firstly because this has had a partial release on VHS years ago but not a complete one, and there is next to nothing about this show on the internet. This is exactly the kind of show I wanted these posts to be about. It will also not be released any time soon for the reason that it was made by TVS which changed hands several times, ironically ultimately being bought by Disney. There are contradictory accounts of the state of their archive but what is certain is they lost their records so the inability to prove who owns what will prevent a commercial release, sadly. There are many episodes on YouTube and there is a non-professional DVD set I have come across.

In this first episode Guy Buchanan (Bowles) meets the other con-man protagonist Harry Cassidy (Bryan Murray) at a funeral. The deceased is another con-man, Bertie Lazar (or possibly Luzar, I'm not sure) who killed himself in a high class brothel after being hounded and blackmailed by another con-man, Terry Parsons. The girls who run the brothel, who were as close to a family as Bertie had, have organized the funeral and get Buchanan and Cassidy together to carry out Bertie's planned revenge on Parsons, which is fraudulently to sell him some land in Ireland.

I'm going to say right now that I had never seen this show before and I really like it. I think it is important to remember that it stands as a comment on the yuppie culture of the 1980s, and in reality Parsons is a yuppie. Plotting is smooth, no time is wasted with unnecessary explanation and I think it is perfectly paced to give it a leisurely feel. One of the best things is the depiction of all things as they were at the end of the eighties and beginning of the nineties: the shoulder pads are huge, as are the mobile phones, and it perfectly depicts the opulence of the time. So perhaps it is actually a mirror image of aspirational television.

The episode ends with a wonderful twist. Great stuff.

I am going to look out more episodes to watch, which is always a good sign.

Below is a magazine article about the show I found on the internet (Source). 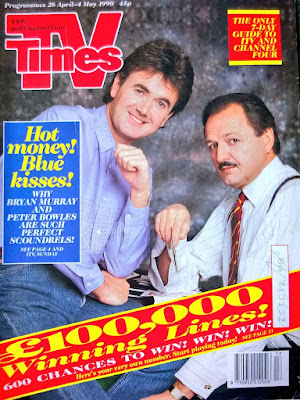 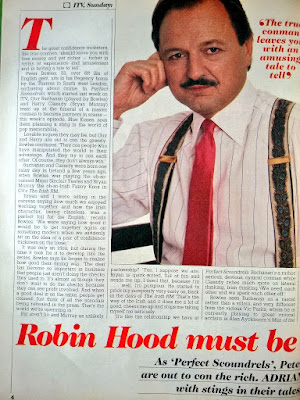 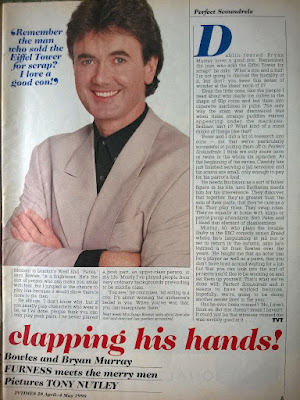