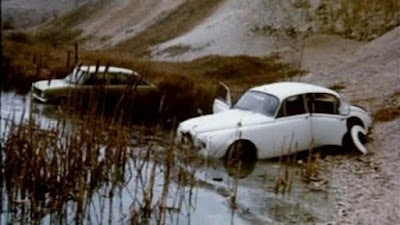 As you all know I have a policy that shows I think are absolute duds will not appear here, and for most of my first viewing of this show I was thinking that I would have to comment that Black Carrion wouldn't appear here if I wasn't going through the appearances of the famous white Jaguar.

In fact I have noticed that opinions about it on the internet tend to be very divided. Don't get me wrong, the majority opinion is very clearly that Black Carrion is utter dross. However there is also a solid phalanx of people who really appreciate it.

I think that may be because this show draws on the mythology and folklore of the possibly abandoned or cursed village where people don't go and if they do they don't come back. The village in this case is even believed not to exist, but there are many real life examples of this. Dode in Kent would be an example, Kuldhara in India would be another. Sometimes these villages, or their inhabitants, vanish completely, such as this one in China, a mythology borrowed for an episode of Department S. Little Storping in The Avengers episode Murdersville is out of the same stable, and I have written about another TV example in Randall and Hopkirk Deceased.

You've seen the snag here, haven't you, which is that the thing which has grabbed my interest is not the actual subject of the show, that sixties pop stars have vanished from public life and two journalists are trying to find them at the aforementioned village. The way he looks for them is interesting as a period piece in itself. The music to the show is also good and much-discussed on the internet, so the show really should hang together based on its ingredients.

I think where it fails is where the huge lorry is chasing the Austin Maxi. I think the tone of the show changes from that point, becoming much more bleak, and I think it is different enough that it is like there are two different shows sewn together. If I had to put my finger on a fault I think this is it and it rather wrong foots the viewer. Almost immediately after that scene the couple in the car start bickering and while we all know that being shaken up makes you argumentative, this couple are something else. Why the hell do people stay married to someone who just bickers and bickers, why stay with someone who obviously can't stand you and can't even be bothered to be vaguely civil or kind to you?

So I suppose I'm saying that the show looks like one story but becomes another, in an interesting but unexpected setting. Unfortunately not a recipe for success!

So of course what you do at this point is introduce another theme. Stop looking at me like that, it's not my fight. The theme is a bird theme or possibly one of the journalists has turned hysterical. Anyway what we see is her having some sort of turn while we see birds flapping. It is very much in the vein of The Owl Service, which may well have been an inspiration for the whole thing, now I come to think of it. The bird visuals recur elsewhere. If you have any awareness of what trauma looks like, from this point it is fairly obvious that the journalist is previously involved in the story and is engaging with this mystery in a traumatized way.

One of the more perplexing things is why the white Jaguar footage was used. Another white Jaguar was actually crashed for this show and we see it being pushed over the edge into a quarry, which is also done with other cars, which we also see. The footage is inserted at this point and is quite obviously of a different setting. Well we'll never know now.

I'm going to go right out on a limb and opine that I don't think this is at all a dud. I particularly like the explanation for the incredible number of mysteries that are set up. Of course its major shortcoming is that it crams in far too much stuff.

I would recommend this show for your viewing - just keep away from any deserted villages. And so my journey of watching a poor old Jaguar get destroyed over and over is complete. What I have noticed has been the broadly similar themes between ITC shows - which made Department S stand out even more!