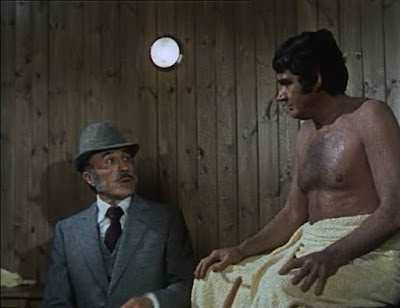 Another show I have rather avoided writing about here. I am going to be completely upfront with the reason, which is the rather superficial one that the actor Gene Barry plays the lead character, Gene Bradley. I have even had to check that three times while writing it, and I just find the similarity of those names very confusing. Barry was of course American, in true ITC fashion and Bradley is of course the archetypal ITC hero, millionaire, sophisticated, and all over the continent like a rash.

And this episode has a very classic plot around inheritance and control related to marriage, which is very solid and a real contrast with the exotic Jason King.

The Jaguar footage is used in a quite low key way to show the demise of an associate of Bradley's, who has already gone to the castle housing the titular icon. If you have the Network DVD box set there is a featurette on disc 4 called Icons Aren't Forever, which of course I had to watch in preparation for this post, in which Barry Morse talks at length about Gene Barry and compares working with him to dealing with his infant grandchildren!

I'm not really criticising as such, because I like this a lot, but there is a possible plot hole. Would a set up owned by a multi-millionaire, with security heavily dependant on CCTV, really just have an open fuse box so you could take the whole thing out in one go? It seems a bit unsophisticated for the time and of course nowadays they would have battery power or generators to take over in the event of an outage. But it's brought back happy memories of how many of the terraced houses where I grew up had those in the entries and just pulling the fuse out a bit would create havoc. My normal bugbear that there are a lot of familiar faces does however apply here!

I regret to say that my project of blogging here about all the known TV shows where the ITC white Jaguar footage is reused, has hit a snag and it's not the one I was expecting. I have been able to find the final occurrence of the footage, which is in an episode of Hammer House of Mystery and Suspense, but the next one, which is in the Follyfoot episode Uncle Joe, has defeated me completely. The internet is awash with episodes of the show, but not that one, and I don't have the £35 to spend on the discs to write about that one episode. I don't have subscriptions to things like Amazon Prime and Netflix, for reasons which will be apparent to anyone reading this blog. Besides, horses scare me witless so it's not really a show I want sitting on the shelf. If anyone knows where there is a pirated copy of the Follyfoot episode Uncle Joe online, please leave a comment here and I will read it but not publish it.

Otherwise the next post will be on the final appearance of the white Jaguar footage, which is the Hammer House of Mystery and Suspense episode Black Carrion.