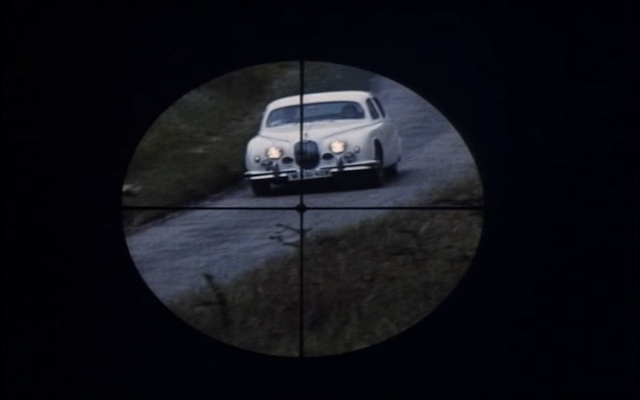 Caution: there is a possible plot spoiler in this post. It is below the line.

Our second show where the white Jag gets it and our second episode of The Baron. This one may even have some tenuous connection to the antiques trade, because as you all know, a cameo brooch is heavily involved.

I'm liking this Baron very much because it is very firmly out of the ITC stable and yet is a solid mystery.

It is set in Spain, which gives it its ITC sophistication. For the main part it is also visually very ITC, however I think many props are used to set up the mystery in a way very characteristic of The Avengers. What I mean by this is the amount of 'antique' (reproduction in reality) furniture and other props. I would suggest that ITC usually would be more likely to go for a modern look. If you put this clobber in an episode of The Avengers, it would spell out that a great old English family has gorn to the dogs.  Here the old family set up is contrasted with the modem set up of the lab.

We just need Mrs Peel to kick a few men and we can all be back for tea. Although there's nothing kinky here! The resolution is much more characteristic of ITC. The contrast of the lab and radiation draws on the frequent fear expressed in TV at this time, of technology getting into the wrong hands. Actually this gets more Avengers the more I think about it - but now I look the screenplay is by Dennis Spooner, which would explain the crossover. My only criticism would be that I think it's a hugely ambitious plot hiding behind a supposedly cursed brooch. There is a further possible criticism that once you see the radiation signs the connection with the brooch is self explanatory.

There is a very neat plot point that the title refers to the radioactivity of the brooch rather than a direct murder by a person. Personally I'm all for nuclear power in itself: as with everything else the problem is humans being malicious, stupid or just plain dangerous.

There are familiar faces in this, which normally I don't like but I always like Peter Bowles as a baddy, because he is so urbane. Here he hams it up to be exactly the sort of man you would avoid!

It is also interesting that the Jaguar crash comes fairly early in the episode. I realize that I was assuming it would be later.

This Baron is a very solid mystery out of the ITC stable, drawing on some of the visual techniques of The Avengers. 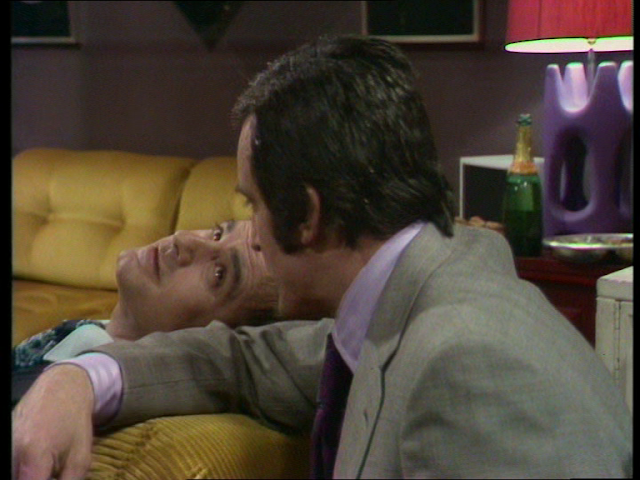