(White Jaguar TV) The Baron: Something for a Rainy Day 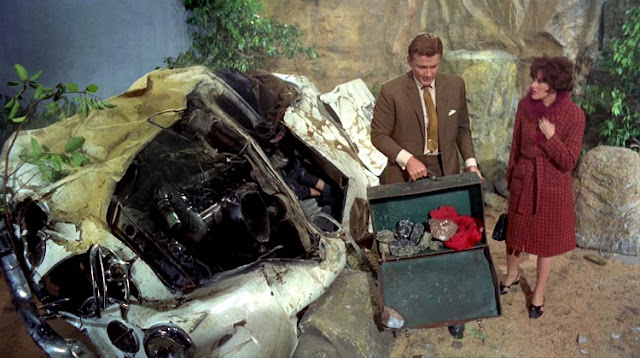 I mooted several possible linked posts plans in my last post. As you can see I have gone for the idea of a series of posts on the episodes of shows featuring the famous ITC white Jaguar plummeting over the cliff. You can read more about the making of this here which is also the list I'm going by for my posts. I hope I can complete this, however I might have difficulty with the final appearance on the list, an episode of Hammer House of Mystery and Suspense.

My first thought about the use of these Jaguars is that it was relatively economical to shoot this footage once and reuse it. I imagine nowadays it could be done virtually and I see new Jaguars cost between £30,000 and £65,000 so at current prices it would be very expensive! Nor were the cars new at the time: they used a mixture of Mark 1 (1955 to 1959) cars and Mark 2 (1959 to 1967) cars. You won't see them on the road here now -as far as I can see the numbers remaining of both models are down to the hundreds, not least because old heavy Jaguars and Rovers have always been favourites of banger racers.

This episode is about The Baron's attempt to get back a stolen Aztec mask. That fact alone brings up a difference between the sixties and now - I suspect that nowadays there would be at least some mention of the mask being colonially misappropriated in the first place! Instead, in classic ITC fashion, the show does depict some of life's lows, but the accent is very much on the international high life of the time.

It gives an impression (it's been a while since I've seen The Baron or even any other ITC) of being less studio-bound than some of their shows. I see the house used as the chateau was demolished in 1975 and frankly doesn't look that far off it here.

This episode is a real treat for classic car enthusiasts, and I personally would go for the Citroën because I'm just eccentric that way.

It has the full house of the standard jobbing sixties actors we are all familiar with, which for me is a bit of a distraction. In fact reading round this episode before writing this has made me wonder whether this episode isn't popular, because I'm having real problems finding people writing about it. It appears in the standard sites such as IMDB, the Avengers location site, and so on, but believe it or not, I have only found one actual blog post simply about this episode. I can't really analyse this because of course nobody says why they haven't written about a show, and it seems to me fairly standard sixties TV fare so I can't see why there's a lack of chatter. In fact I would expect more blogging about this because this is the episode the white Jaguar scene was shot for. I have even seen it commented that The Baron was a knock off of The Saint (a fair enough comment), however this was the era when everyone was knocking off James Bond so I don't see why that would be a difficulty. I have even, ironically, seen an insurance company  write about this show on its website!

That said there is a review of the box set and whole series here which does include some pertinent criticism, including that the whole premise of the show is wildly unlikely. It is at this point I stop and give thanks to the Rediffusion spirit that the TV which has formed my life - the Saint, The Man from UNCLE, Mission Impossible and so on - has been unrelentingly unrealistic, because who the hell wants reality in 2021! As far as this episode goes it is completely unrealistic that an employee of an insurance company would go to the amount of trouble they do here. Admittedly I have never been rich, so I suppose they may do if the amount insured is worth it, but I am prepared to take it as one of the conventions of fiction. Very much like the reading of the will which happens in every old dark house film and yet is actually not done anywhere that I know of. It has certainly never been a reality here, but has become part of the culture.