This is a post I've been thinking about for ages, because we all wish there was more of The Avengers (particularly in its later incarnations) but there couldn't really be any more. The New Avengers doesn't quite catch the feel of the later series of the original show - perhaps you had to be stoned out of your head to write them. With this in mind, here are three films from the sixties which I think also capture the ethos of the original Avengers.

Just to be totally clear, I mean the Peel/King series with high levels of unreality, lots of magical omniscience, and set in a very swinging London. This was of course a London where you didn't have to have an income of £300,000 a week to live there. The world of parties, lots of experimentation, and a time which will never be repeated. It was a world in which the entire resources of the world weren't aggregated in the hands of half a dozen corporations. 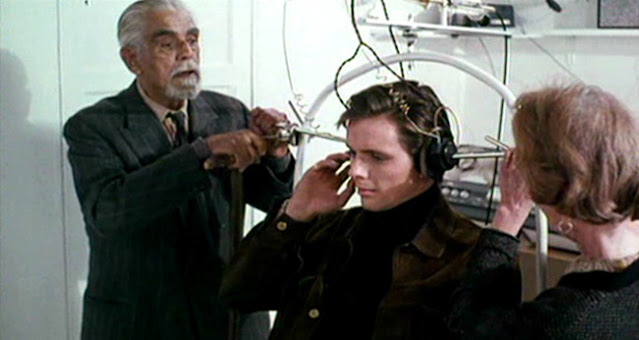 First up we have The Sorcerers (1967) in which Boris Karloff plays an ageing medical hypnotist who with his wife uses technology to take over the mind of a young man played by Ian Ogilvy. I wasn't really thinking of this sort of magical omniscience! They use their control of the young man to experience things they haven't for years, or now can't because of their age. However it soon goes wrong and the wife turns into the sort of megalomaniac we are used to from The Avengers, beginning with getting the man to steal her a fur coat.

There is a sense in which the plot of this one isn't the Avengers feature - it doesn't end well for the couple but there isn't really anyone saving the world in style. The Avengers flavour comes from the swinging London setting. We see clubs, pubs and bars of the time. We see the life lived by these youngsters in bed-sitters - exactly the sort of free life which would have been Tara King's cover story, given that she was a secret agent. I also love the scenes of 1960s London, which is so different from today's uniform cities. I must be getting old.

In Blow-up (1966) a photographer in Swinging London is living a proper sixties life-style however then takes a picture of a murder. This film, like all good TV, can be read in many ways, including what moral you take from it and the way it can even be seen to be about photography. It is set in the swinging London milieu we are familiar with, and of course photographers appear a couple of times in The Avengers as staple characters of the time.

There is something very reminiscent of Steed at his most suave about this film. I think the jazz score may contribute to that. I think what makes it feel so Avengers is that it captures the unreality thing to perfection and of course there is a crime involved. At times I find myself wondering whether the protagonist is a secret agent. But the thing I absolutely love best though is the totally dismissive contemporary review in the Guardian which described the pot party scene as grotesquely unconvincing. In reality it was filmed on location and the actors were genuinely stoned out of their minds so yah boo sucks to the Grauniad. 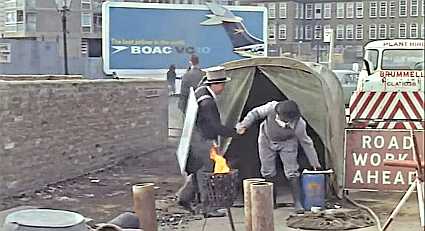 The Sandwich Man (1966) is purely about a day in the life of a man whose job is to walk around the city in a morning suit wearing an advertising sandwich board, and the things he sees and people he meets. His real interest in life is pigeon racing. This is probably the least arty or niche film of the three because it is intended to be a comedy, and the eccentric characters he meets are played by some of the biggest names in film and comedy of the day.

Of course it is the eccentric characters which makes this so Avengers and many of them would even give the murderous knitter with the nephews a run for money in eccentricity. The only problem with this one is some very dodgy portrayals of race, and yet the ethnic characters thus depicted are portrayed to be thoroughly integrated into British society.

If you want to see how close to reality the film gets there is a documentary called The London Nobody Knows (1969).

Pssst don't tell anyone I told you but the last time I looked everything mentioned here was available to see for free in various places on the internet.