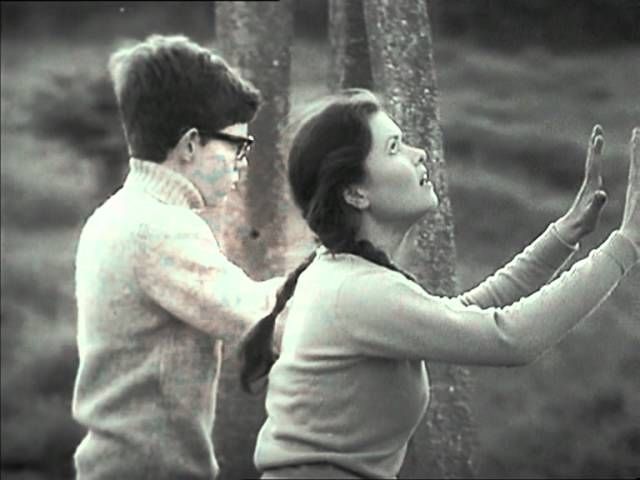 shows he's never heard of here. This is of course setting the bar very high and I hope I can live up to it. Mitchell, I hope you've never heard of Timeslip or at least are prepared to pretend you haven't!

It's a show I have fought shy of writing about here for several reasons. The first is that I find it confusing. This is mainly because despite being an apparently straightforward series of four adventures in total, it seems to come in a bewildering array of different box sets. The one I have is the blue box with the girl in a yellow and red picture holding her arms up, and appears to be complete.

The second reason is that I personally tend to find time travel stories confusing so please bear that in mind as you read this post.

I must confess something else, which is that I have a real weakness for this show. In fact for several children's TV shows of the early 1970s because they embody a probably imagined time before I was born. Is there any likelihood that children could stray into an abandoned Ministry of Defence station now? Not on your nelly. Nor is it likely that kids these days would be taken in by the time trap which merely required some fence posts, a lot of acting and some basic camera tricks.

Nonetheless the show speaks ironically of a different time when it is supposed children had greater freedom to rove around than they do now. Nor is this a country/city difference - a friend grew up in Aston on the other side of the city centre in the seventies and remembers people leaving their doors unlocked. Any apparent danger to the kids is subsumed into the character of the baddies.

In this case the baddies are Germans, because the children are taken back to 1940. In the manner of the time, the enemy is very clear, they're usually foreign and we know exactly who they are.

I love this series and recommend it almost unreservedly, but for the proviso that in the second adventure the show goes forward in time to 1990, and really shows never get the going forward in time thing right. It is very much of its time, both in production and in the paranormal and environmental concerns which were all the rage at the time. I think it is best approached as fantasy so that the ride can be enjoyed.

Oh as a final note, I think one of the reasons I haven't got round to writing about this show yet is that because it was wildly popular at the time it has been extensively covered however I just couldn't get into the official site and I love shows which aren't chewed to death 😃