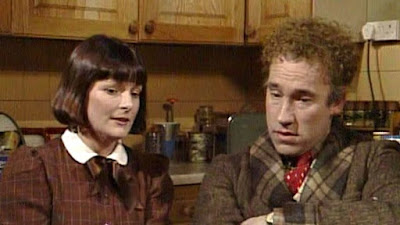 I once went to a wedding where, when the best man produced the little box containing the ring, the ring almost leapt out and went down through one of those heating grilles so common in Victorian buildings. The churchwarden, who had the necessary tools, had to be fetched from his house around the corner and it took a fair time for the ring to be found. Meanwhile the two families were outside the church on opposite sides, both either in tears or announcing how they all knew this marriage was doomed from the start. Surprisingly they did actually get married but I don't know how it lasted, although I do know that there was an atmosphere you could cut with a knife.
The reason I go into this is that it is the sort of thing you would expect to happen at a wedding attended by Tom Chance. This show is often called a sitcom, but it isn't. A sitcom is a usually dreary series which goes on too long and attempts to make comedy of the characters' situation. This, however, is a show about a man cursed by coincidence throughout his life and his girlfriend's love for him.
It was an original production by the then new Channel 4, which was known for radical and imaginative broadcasting. I came across it at a significant time of my life, when I was beginning to differentiate myself from my family and to think about what I suppose should laughingly be called aspirations. I had somehow got the idea that talking like a telegram was a sophisticated thing to do (I suspect from EF Benson's Mapp and Lucia books) and since Chance also talks like that I was sold. Talking like a telegram is of course long gone.
In this one Chance's ability to assert himself is to the fore, usually bookended with the recurring motif of him downing a pint in one. It has my favourite scene in the entire series where he tells a man in the pub to go outside and the man proceeds to throw stuff about and cover himself in blood as if he's been beaten up by Tom!
The aspect of his girlfriend (played by Barbara Blethyn) trying to get him to get his leg over is downplayed here. There is a slight problem that Tom is played by Simon Callow, who isn't the most obviously heterosexual of men, which gives the impression that she's trying to get off with a gay man. They do actually get married in the end. Incidentally I see from Google's suggestions that Alison so frequently gets her kit off with the intention of seducing Tom, that this show features on lingerie fetish pages!
What I love most about it, though, is the way the strangest coincidences happen to Tom, and I suspect my readers will like it too.
80s TV Chance in a Million