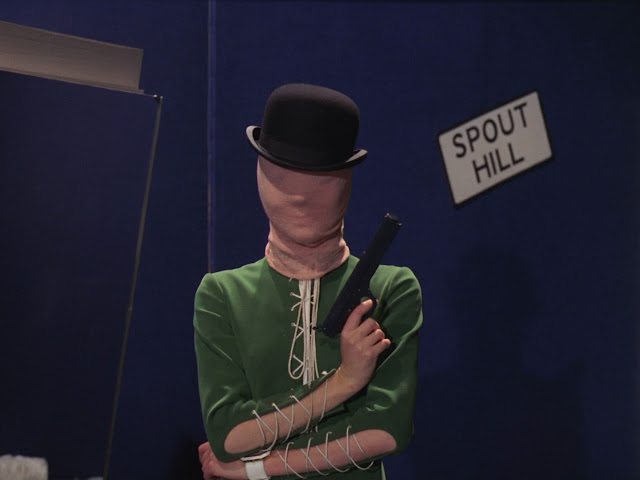 I have had a stressful few weeks... However thankfully I am starting a holiday at home which will hopefully mean getting some sun. I was thinking which recent purchases I ought to blog about but then decided that I will watch and blog about what I want to!
One of the reasons I have picked this Avengers is it is an all-time favourite of mine, seems to be popular with the fans and yet strangely gets hammered on the Internet. Let's get the criticism out of the way, so that I can proceed with pure adulation. Props, locations, shots are all taken from other Avengers, but of course we must remember these shows were intended to be viewed once and not to hold up to the sort of analysis we give them now. You will also read that this one is inferior to Too Many Christmas Trees - it is if you buy the premise of real psychic powers, but I think the fake psychic power here puts it more firmly in the spy stable.
I have commented many times on the sparse props used by this series to give a whole context - here, stately home, leather chairs and suits combine to set the action firmly in The Establishment. Nobody ever notices that here the Establishment is seen as faltering or even rotten. Melford comments to Steed that Steed's taxes have gone on his hotel, and of course the government can't manage to get their delegate to the peace conference. Steed is placed outside the Establishment (despite being an agent of the Ministry) and yet the government is dependent on him and Mrs Peel - the sixties preoccupation with the new world and opportunities which were coming.
There are two aspects which are my absolute favourites. One is the shooting scene. The other is the street scenes, which I suppose ought to be strictly within the fantasy world of The Avengers and yet at this length of time seem so old fashioned.
I suspect that many viewers would find the mind control premise of this episode pretty incredible, but the point of The Avengers is that it isn't real and I think this one really deserves reconsideration.
60s TV The Avengers